We all lose things from time to time. Some things just get lost, from our phones to car keys, to many others. These things happen, but on other occasions things can get a whole lot weirder. Among these are several enormous WWII era shipwrecks scattered on the bottom of the Java Sea, which for some reason or another have been lost as if they have mysteriously just vanished into thin air.

On February 27, 1942, a massive fleet composed of vessels from Dutch, British, Australian, and US forces, including five cruisers, nine destroyers, and at least one submarine converged upon the Java Sea under the command of Dutch Adm. Karel Doorman. The multinational fleet was there to engage with the Japanese forces that were spreading through the region and which were getting ready to invade Dutch-ruled Indonesia in an alarming escalation. There was heavy fighting that day, but although they gave a valiant effort, the Japanese fleet was simply too powerful and the Allied forces were vastly outnumbered and overpowered. The Japanese forces pounded them relentlessly, and when the smoke cleared the British destroyers HMS Jupiter, HMS Electra and cruiser HMS Exeter, as well as the US submarine the USS Perch and the Dutch ships HNLMS De Ruyter, HNLMS Java, and HNLMS Kortenaer had all been destroyed and sunk by the never-ending rain of bombs, shelling, and torpedoes from the superior enemy fleet. Not long after this, on March 1, the Japanese managed to also sink the Australian cruiser HMAS Perth and the American USS Houston, which had been the flagship of the US Asiatic Fleet, when they engaged them in the Sundra Strait. 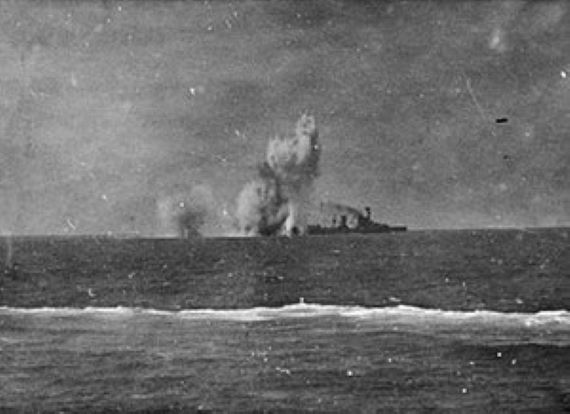 In the end, only two of the ships managed to survive the carnage, and the battle had ended in a catastrophic loss for the Allies, littering the bottom of the sea with the carcasses of these once mighty metal behemoths and sending thousands of men with them to a watery grave. It also paved the way for the Japanese to take over the Dutch colony, going on to invade the Dutch East Indies. Although the Battle of the Java Sea ranks as one of the worst naval defeats the Allies faced during World War II, they were not the first ships to go down here, and would not be the last, with the seas around Indonesia, Singapore and Malaysia ultimately being the final resting place for hundreds of ships, planes, and submarines, making the deep murky waters a vast undersea graveyard. In November of 2016, to commemorate the 75th anniversary of the Battle of the Java Sea, an international diving expedition went out to the area where Admiral Doorman had gone down on his ship. They made their way out to the wreck’s location, around 100km (60 miles) off the Java coast and 70 m down, with the plan of leaving a memorial plaque at the site. The only problem was the ship simply wasn’t there anymore.

It would turn out that the three Dutch warships, the HNLMS De Ruyter and HNLMS Java, as well as the British vessels HMS Exeter, HMS Encounter, and the destroyer HMS Electra, and even the U.S. submarine USS Perch had all vanished without a trace, leaving behind merely their massive imprints on the bottom and no other scrap, trace or disturbances. It was as if someone had just plucked them off the bottom and whisked them away, and at the time it was a rather shocking discovery. Where had they gone? How had this happened? No one knew, and considering that the remains of hundreds of dead men had also been ensconced aboard those vessels, not only was it mysterious, but it was also a tragic desecration of what were considered war graves.

The American, British and Dutch governments immediately condemned the disappearances of the ships and their remains and launched an investigation, but what was on everyone’s minds was just how these massive ships could have just so completely vanished without a trace. The first and most seemingly obvious answer to this is that it was the result of illegal salvaging operations. This has been going on for years in the area, where illegal salvagers raid and loot the wrecks for their scrap metal such as steel, bronze, aluminum, copper, and brass, which can be extremely lucrative. For instance, a single bronze propeller from one of these huge ships can go for up to $50,000, and even the unexploded ordnance can be melted down for its metal, making one of these ships worth a lot of money, with a single vessel able to pull in hundreds of thousands of dollars.

The steel from these ships is especially valuable because they have what is called “low-background steel.” All steel made after the first detonation of a nuclear device, code-named the Trinity test and carried out in New Mexico on July 16, 1945, as well as subsequent atomic bomb blasts, has been tainted by radionuclides because its production uses atmospheric air. This basically means it is radioactive, which is so slight that it doesn’t mostly affect us, but for some very sensitive equipment used in scientific and medical fields it is useless. In some capacities and applications it is absolutely crucial to have low-background steel, which is steel produced before the atomic blasts. It is one of the reasons why World War I and World War II wrecks are so heavily targeted by looters, although the background radiation levels have dropped over the years, making low-background steel less valuable, yet it is still in demand.

The bottom line is, these illegal salvage operations can bring in a lot of money, but there are several oddities with these missing ships that make this explanation strange. One is that these ships are located in extremely deep water for such an operation, to the point that costs would be prohibitive and the use of cranes and other equipment would be limited. Paul Koole of the salvage firm Mammoet has said of it, “It is almost impossible to salvage this. It is far too deep.” There is also the oddity that the ships are completely gone, leaving only their indentations behind. These are not small ships either. For instance, the American submarine the USS Perch was 91 meters long and weighed 1370 tons. The Dutch warship HNLMS De Ruyter was 171 meters long and when full weighed more than 6650 tons, while Britain's HMS Exeter was even bigger at a whopping 8520 tons. How could anyone be able to lift up one of these massive vessels and just take the whole thing away? Such an operation would require multiple barges, cranes, trained divers, and a whole lot of time, to the point that it seems unlikely that anyone could have pulled off such an ambitious feat without anyone noticing. One Navy spokesperson has said of it all, “To say that the wreckage had gone suddenly, doesn't make sense. It is underwater activities that can take months even years." 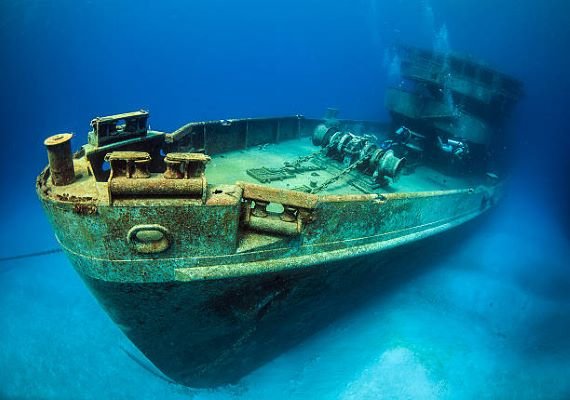 One idea is that they were slowly stripped over time until there was nothing left, but this would have also taken years, as well as lots of specialized equipment and expertise and multiple excursions. It also doesn’t explain why most other wrecks in the area have been found in various states of being pillaged, some practically still intact, while these particular ships just happen to be completely gone. Some have suggested that the ships were towed along the bottom to the nearest port, but the problem here is that this would have left a trail along the bottom and there is none. Another idea is that the ships could have been broken down with explosives and taken away in chunks, but again there is no disturbance on the bottom or debris field that indicates an explosion. There has also been speculation that the vessels could have naturally shifted due to storms or tectonic activity, but this still doesn’t explain where they actually went. Salvage company manager Bas Wiebe has said of this explanation, “Over the decades the ships would have filled up with sand, so they would be even heavier now. Even if they moved, they wouldn't have shifted very much.” This shifting also would have left signs of dragging along the bottom but there is none. There is nothing to suggest an explosion, towing, or shifting, just those serene indentations as if the ships were neatly lifted away or evaporated into thin air.

What happened to these wrecks? Were they scavenged somehow, and if so, how? Were they shifted by some natural process, and if so where did they go? In the end no one knows for sure, and authorities are still scrambling for answers. It certainly seems like a mystery not to be solved any time soon,

Strange and Sinister Holograms: Seeing Weird Things in the Sky