The Strange Story of the Sentinel Enigma of the Mojave Desert

Sprawled out in the Southwestern United States in portions of California, Nevada, Arizona, and Utah and bordered by the Sierra Nevada mountains and the Sonoran Desert is an expanse of desert wasteland known as the Mojave Desert. The smallest and driest desert of the four American deserts, it is named for the indigenous Mojave people, and is a forbidding alien moonscape of dry, parched earth, scraggly brush, and vistas of dusty nothingness. It is a largely uninhabited realm, with few roads and fewer people, a place where one might perhaps expect to find mysteries, a place beyond civilization and at times even seemingly beyond reality as we know it, and one of its many strange features is an anomaly often called The Sentinel Enigma.

On a remote outcropping of rock out upon a 150-foot high lone hill in the harsh badlands of the Mojave Desert National Preserve, not far from the ghost town of Crucero, California, in the proximity of a place called Mesquite Spring, about half way between the towns of Baker and Ludlow, is a rather curious sight that clashes with the rocks and desert around it. Perched up on the rocks and overlooking its bleak domain is a huge, metal cone-shaped structure reminiscent of a megaphone or loudspeaker, rusted by decades of the elements and bolted tightly in place to the point that it cannot be budged. The weird thing measures approximately 8 feet long, and if one is to make the precarious climb up to it, they will find that within the enigmatic structure is what seems to be crosshairs, the purpose of which is just as unknown as why it is there to begin with. There are no markings upon it, no serial numbers or signatures, nothing to give a hint as to where it came from. The object is also teetering on a difficult to reach, treacherous outcropping and obviously very heavy, approximately 600 pounds, something that would have taken a lot of effort to drag up there, but the thing is that no one knows who put it there or why.

The rusted, wind-blasted condition of the structure, which is often referred to as The Sentinel Enigma, makes it obvious it has been there for some time, and many locals claim it has been there for decades, its purpose inscrutable. There are few hints to go on. The object, whatever it is, is aligned north to south, and faces towards a hill with petroglyphs carved into rock, probably created by the nomadic Chemehuevi people, although what connection this has is unknown. The enigmatic nature of the device and its existence here in the middle of nowhere have spawned all sorts of theories as to what it could be for, ranging from the plausible to the downright outlandish.

One of the main ideas is that this has something to do with the secret chemical weapons testing that was apparently going on here in the 1940s and 50s. Indeed the remote, desolate area has long been a prime location for secret tests, and the region holds four major, active military installations, including the China Lake Naval Air Weapons Station, the Fort Irwin National Training Center, Edwards Air Force Base, and the Marine Corp Air Ground Combat Center in Twentynine Palms. The idea is that the object may have served as some sort of siren to warn personnel of when a train with chemical weapons was approaching along the railway into the area. Others are not sure of this idea. Sarah Robey, a history professor at Idaho State University, has said of her thoughts on the matter:

It's probably not a civil defense or air raid siren. The early Cold War versions almost always have a rectangular mouth, WW2-era air raid sirens didn't really look like that either, even the ones that were more cylindrical. Moreover, you'd expect to find such civilian-oriented sirens in much more heavily populated areas than out in the desert. Its proximity to Edwards Air Force Base (as well as Navy and Army sites) is a much bigger clue. Edwards is where the Air Force did a lot of sound barrier experiments, including Chuck Yeager's famous flights. I could definitely see something like the megaphone being some sort of measuring instrument related to flight, shock/sound waves, etc. Even though the megaphone is 150+ miles [241+ kilometers] away, it's plausible that something like this could have been used to detect long-range shock waves or other disturbances. However, I kind of doubt it. 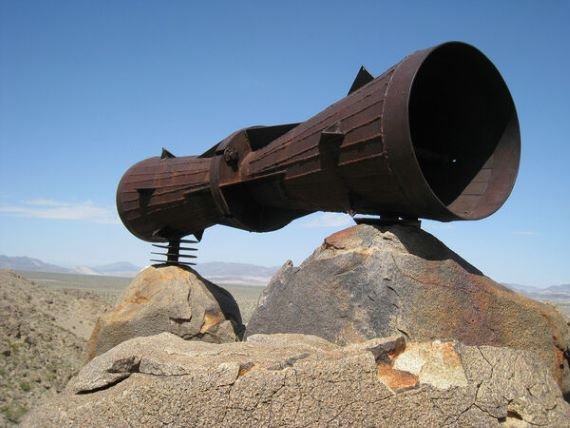 Another prominent idea is that it was used somehow to locate a subterranean cave system that was said to hold within it “a great underground river of gold” back in the 1930s. Other theories swirl as well, such as that it was a gunsight or sighting device of some sort, a part of a rocket system, an antenna of some kind, simply an art installation, or perhaps a pipeline venturi, which basically measures a fluid's flowrate by reducing the cross-sectional flow area in the flow path and generating a pressure difference. Of course, there is also the idea that aliens put it there. Maybe someone just put it there to add to the mystique of this alien vista. Eric Edwards, the founder of the site CampsitePhotos, has said of this possibility:

The desert, especially remote desert locations, are inherently mysterious. Often you'll find pristine areas with amazing views and beautiful sometimes strange geological formations. I think people like to put these strange objects in these locations because they add even more mystery and wonder. I doubt their intentions are to draw interest to any particular area, but rather to have a little fun and see how people might react.

The Sentinel Enigma still sits out there just as mysterious as ever, aimed out over its kingdom and just as little understood as it has ever been. What is this thing? Who put it there and why? We will probably never really know for sure, and it remains just one more bizarre and mysterious feature of this forbidding, alien land.

The Philadelphia Experiment: Controversy and Conspiracy