When paranormal investigators were exploring Spofforth Castle in Harrogate, North Yorkshire, England, they took a photo of what appeared to be a very large shadow figure.

Just days ago, when the Project Reveal – Ghosts of Britain paranormal team investigated the castle, investigator Darren Ross snapped the very creepy photo of what looked like a 7-foot-tall shadow in the corner of the building. Additionally, they captured a growling sound when they conducted EVP recordings.

“There was definitely something there, I'm not sure if it was the woman or not, but we believe there was something,” Darren said in reference to the story that a woman was allegedly pushed through a window to her death at the castle back in the 1700s and who is said to haunt the location. “It’s alright until you actually hear something, then it makes you jump,” he added. The team did say that they will be returning to the castle in the future for another investigation.

Dating back numerous centuries, Spofforth Castle was the main seat of the well-known Percy family until the late part of the 14th century – they were one of the most influential and important families in the northern part of England. William de Percy (who was a favorite of William the Conqueror) constructed a manor house on the property in the 11th century although the building is no longer there.

The castle also has a long history of paranormal activity. The most well-known entity is that of a “half ghost” that appears as a bluish-white hue and is often witnessed standing on a small parapet at the top of the tower before falling towards the grass path beneath it. The ghost disappears before reaching the ground; however, the creepiest thing about the entity is that it is missing the bottom half of its body.

Sightings of this apparition have been reported as far back as the 1960s and 1970s when a bunch of school children and their teacher witnessed the falling ghost, as well as two people who were having a picnic who also reported seeing it. It is believed that this is a ghost of a female. 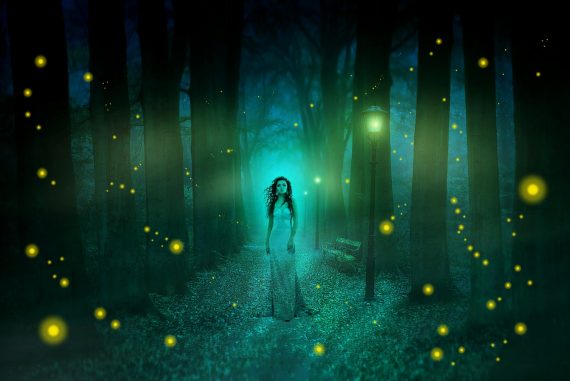 So, did the paranormal team capture photographic evidence of the “half ghost” or perhaps another entity haunting the location? You can decide for yourself as the picture of the ghostly figure can be seen here.

Singer Claims to be Seduced by Charming Yet Sinister Victorian Ghost