“The British ambassador has been working through the night to get Ai-Da released, but we’re right up to the wire now. It’s really stressful.”

Aidan Meller is the art director at the Aidan Meller Galleries in the UK and the human responsible for getting Ai-Da to a recent sculpture exhibition taking place at the Great Pyramid of Giza. Ai-Da (large collection of her photos here) is named both for computing pioneer Ada Lovelace and the artificial intelligence (AI) which directs her camera-equipped eyes and robotic arm to create drawings based on what she ‘sees’ and how she interprets the view, making her the “world’s first ultra-realistic artist” according to Meller’s website. Unfortunately, security officials at the Egyptian Customs Office were not interested in Ai-Da’s art – just her spying eyes. 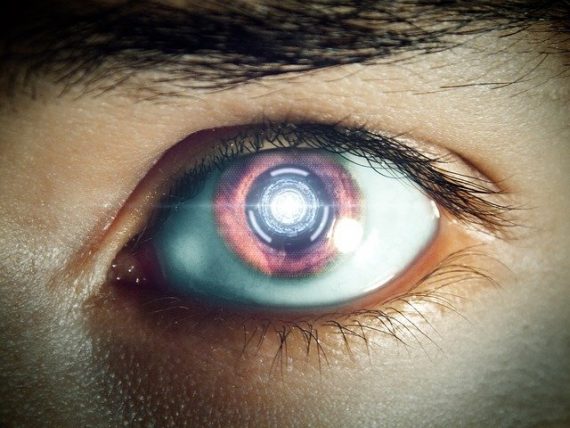 “I can’t take her eyes out. They are integral [to making her art]. She would also look weird without them.”

The London Times reports that the customs officials wanted to remove Ai-Da’s eyes and disable her spying ability. However, they don’t really say what they think she’d be spying on at the sculpture exhibition that can’t already be seen by guests and tourists with cellphone. In an interview with The Guardian, Meller vented his frustration.

“Let’s be really clear about this. She is not a spy. People fear robots, I understand that. But the whole situation is ironic, because the goal of Ai-Da was to highlight and warn of the abuse of technological development, and she’s being held because she is technology. Ai-Da would appreciate that irony, I think.”

A robot who appreciates irony? Now THAT’S scary -- most humans don’t appreciate, much less understand, irony … including her jailers. Ai-Da was powered down and detained, along with her sculpture, for ten days until the British ambassador to Egypt negotiated the release of the robot and her robotic eyes. She and the sculpture are now on display at “Forever Is Now”, an exhibition organized with the assistance of the Egyptian ministry of antiquities and tourism and the Egyptian ministry of foreign affairs.

“What goes on four feet in the morning, two feet at noon, and three feet in the evening?” (Answer: a person, who crawls on their hands and knees as a baby, and must often use a cane in old age.)”

Artnet News says Ai-Da’s statue is based in part on her interpretation of the above riddle of the sphinx and a self-portrait of her with three legs – a genetic alteration that might extend the human lifespan. Meller explains why Ai-Da ‘thinks’ this is going to happen:

“We’re saying that actually, with the new Crispr technology coming through, and the way we can do gene-editing today, life extension is actually very likely. The ancient Egyptians were doing exactly the same thing with mummification. Humans haven’t changed: we still have the desire to live forever.”

Another example of irony – a robot with an unlimited lifespan commenting artistically on the desire of humanity to achieve immortality. Perhaps Egypt is not afraid that Ai-Da is a spy – it’s afraid she will make its people think.

The Mysterious Vanishing of the Dog Lady of Kansas