Dark and sinister history often breeds hauntings. There are many tales of hauntings from the era of the Roman Empire, and this has reflected in the many hauntings of Rome today, yet such hauntings tend to spread out to all of the periphery of that age, including England. After all, the Romans occupied the country for centuries, with legions of men stationed here, making them forever part of the legacy of British history and landscape, living here, and often dying here. It is perhaps this turbulent and violent past that has managed to make sure that England has its fair share of spooky Roman ghosts and specters.

The strange story we have here comes to us from the ancient and historic city of York, in England. This is a place steeped in history, founded in 71 AD, and at one point it was very important to the Roman Empire. Indeed, it is the Romans who founded the city as Eboracum, when the Ninth Legion conquered the Brigantes and built a wooden military fortress above the River Ouse, close to its confluence with the River Foss. York would end up housing around 6,000 Roman legionary soldiers, and the Emperors Hadrian, Septimius Severus and Constantius I all held court in York during their campaigns, with Severus declaring York the capital of the province of Britannia Inferior, and later of the kingdoms of Deira, Northumbria and Jórvík. It has a long history of Roman activity, and it is perhaps for this reason that it seems to be the haunt for many Roman ghosts.

One notable account of ghostly Roman activity in York comes from a humble plumber by the name of Harry Martindale, who one day was under the old Roman Treasurer’s House installing some new water pipes. His job was to basically go in there and knock holes in the ceiling so the pipes could be placed, and he noticed that through the center of the structure ran the remnants of an old Roman road. As he went about his work, he claims that he heard some kind of music coming from nowhere, which got louder and louder, and he realized that the sound was coming from one of the walls. As he looked around trying to figure out what was going on, he would have an experience that would change his life forever. He says of what happened:

The sound got louder and louder, and I realized that at the same time that the sound was actually coming from the wall. And when I realized this, I just glanced down from my ladder and I saw that a figure had come out the wall, and what I was looking at was the top of a helmet with the plumes on. Now I knew whatever it was, shouldn’t have been here in the cellar with me, and through the shock and the terror of seeing this I just stepped back off the ladder, landed on my backside, and then scrambled into the corner of the cellar there. When I looked for the figure, it was almost the complete figure of a Roman solder. It came out the wall, walked at a slight angle to the wall opposite, and as soon as he cleared the wall, then a horse came out of the wall behind him with a Roman soldier sat astride. Now once the horse had cleared the wall and was going through the wall opposite, then Roman soldiers came out in twos - now I was in no fit state to count them as if they were going into the ark, but there were at least 20 of these Roman soldiers appeared here.

Now ‘terror’ is a difficult word - I think what I felt in here was worse than terror. And I can assure you your hair does stand on end, you can actually feel it! Because what I was looking at, although I only had the one single light in here, what I were looking at were the same as you and  I, but the difference between them and me, was … they were coming out of the wall, the wall didn’t exist as far as they were concerned. The only other Roman soldier I’d seen prior to this, is what we call, or I call, the Charlton Heston type - riding a beautiful horse, very smart. These were the complete opposite. The first thing that struck me was how small they were, they were very small indeed. Another remarkable thing when they first came out of the wall - I couldn’t see them from the knees down, until they came to where the Roman road had been excavated - then I could see them from their sandals up. So much so, that when the horse came through the wall, and when it was going across where the Roman road had been excavated, I could see that the fetlocks of the horse were real bushy.

He would end up giving a very detailed description of these spectral soldiers, and although he had no knowledge of Roman history, he was largely incredibly accurate in how these men would have appeared, even mentioning little details that most people wouldn’t possibly know. He was able to accurately describe how a 1st century roman soldier would have looked, mentioning the thin strips of steel attached to a leather base that legionaries of the era wore, called lorica segmentate, as well as the thick strips of leather with metal plates on it and the tunic underneath their armor. It was all incredibly historically accurate, and he would continue his description by saying:

I wouldn’t say they were all that smart, although they did all had the same uniform on. The metal helmet came right under the chin here, and from where I was sat with the single light on, I could see there was growth of hair here on the face. They had the colored plumes coming out the top of the helmet, and as they were going past, I could see they were going down the side of the back of the head here. They all wore the same thing. On the top on the material were strands of leather all the way round, and the only thing I can say they had on was a green colored skirt. All of them carried a short sword on the right hand side, the side nearest to me, and it was a short sword like an oversized dagger. The terror I felt was because I could see them exactly as I can see anyone else now, so I thought naturally all they had to do was glance to their right to see me in the corner - and obviously the terror was in cast they’d do me any harm. But they didn’t, they just looked ahead of them and went into the wall opposite. When the last one had cleared the cellar and gone through the wall, and I couldn’t hear or see anything else, then I made my escape out of here. 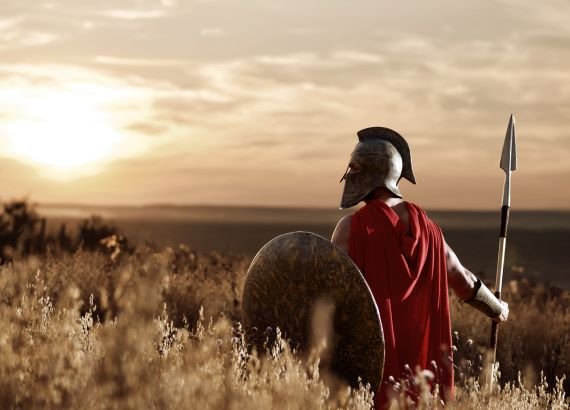 There have been others in the region who have seen such ghostly Roman legionnaires in England. Another place with more than its fair share of such phenomena lies at West Mersea Island, where there was once an important strategic road and had many soldiers stationed here, and there is a large burial mound quite close to the road. In this vicinity there have long been reports of anomalous noises like the sounds of horses and carts going by even when no one is there, or of disembodied voices and laughter. One report from a local resident says:

One night my friend and I came back from Colchester. We’d been to one of the pubs there, and had a few drinks and saw some of our girlfriends and that. We came back onto Mersea Island over the strood, on the East Mersea road. And we turned into Dawes Lane about 400 yards up the road, where there was a pond and haystacks. Misty night…  in the headlights this figure came out between the pond and the haystacks. Walking towards the mound. And he looked like a Roman centurion. He had a helmet on with an eagle on the front, he had a shield, a sword. He had a uniform on, and he sort of had a red skirt, but you couldn’t see his legs. And we stopped the car and my friend said “We’ll have him tonight!” and he jumped out of the car and I followed. We got about 400 yards in the road where there’s a mound - roman mound with an opening in it. And, um, he sort of looked at us and then he disappeared.

Another local has given her own report, saying:

We were coming, coming along Mersea strood one evening, about 12 o’clock. It was high tide and the full moon. And as we were going along the strood, I happened to look across the opposite side of the road. And there was somebody walking along, and I looked, and it was the Roman ghost. And I said to my husband, “oh look - there’s the Roman ghost!” and my husband said “Don’t be so silly, what on earth are you on about?” We turned around and came back, and we came along slowly, and I wound my window down on my side (because I was on the near side), and had a look. And there was this Roman - and my husband saw him as well. He was all dressed up, and holding his two spears. And he had a leather sort of skirt on, and he was sort of very upright and straight. And he was quite a large man. And he was just looking straight ahead. He was looking - all his face was all, a rounded face, and his eyes was just looking straight ahead. And we were further up, and turned round, then when we turned round and came back, he’d just completely disappeared. And the water was at high tide - it was level with the pavement. And there were no boats, no cars, not a bicycle, nothing, and he just completely gone.

What is going on here? Are the forces of this place's violent history keeping these forces tethered here? Is the land itself perhaps holding these images of the past close, absorbing these memories like images to film, only to replay them back? Whatever the case may be, it is all quite intriguing, and we can only wonder at what it all means.

The Sea Serpent Expert and his Interest in Mermaids