Would it surprise you to find out the Pentagon hasn’t been entirely forthcoming in its revelations and confirmations about its formerly secret internal UFO investigation project? Would you be stunned to learn that the project spent much of its time investigating the air capabilities of the Soviet Union and Russia? Would you be shocked to discover that the project was involved with the Skinwalker Ranch in Utah? Prepare to be surprised, stunned, and shocked as we look at a new book called “Skinwalkers at the Pentagon: An Insiders' Account of the Secret Government UFO Program” by government insider Dr. James Lacatski, Bigelow Aerospace Advanced Space Studies insider Dr. Colm Kelleher, and well-known investigative reporter George Knapp.

“Skinwalkers at the Pentagon unmasks the massive scope of the Pentagon’s landmark UFO study that ran from the Defense Intelligence Agency in Washington, D.C. The Advanced Aerospace Weapon System Applications Program, or AAWSAP investigated the “Tic Tac” and other “nuts and bolts” UFO events, analyzed intrusions of UFOs onto US military bases, as well as probed the plethora of bizarre phenomena that government investigators encountered on Skinwalker Ranch.” 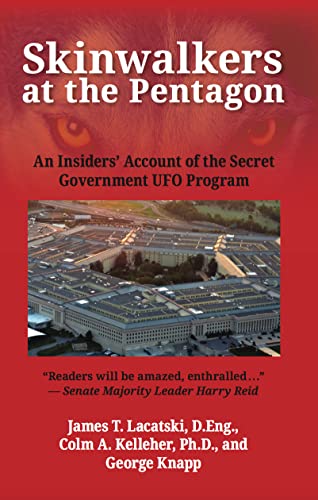 The promo for the book reveals surprise #1 – the project which received $22 million in black budget funds authorized by then Senate Majority Leader Harry Reid was called AATIP (Advanced Aerospace Threat Identification Program) by the media was actually AAWSAP, the Advanced Weapons System Application Program. That name reveals why a big part of the resources were focused on the Soviet Union and Russia – weapons.

On his Mystery Wire website, George Knapp interviews fellow author Dr. James Lacatski, who has never before spoken in public about UFOs or AAWSAP. Lacatski worked for the Defense Warning Office within the Defense Intelligence Agency (DIA) as an intelligence analyst and in that capacity met with Robert Bigelow, owner of the Skinwalker Ranch, to discuss events reported there and secure funding for AAWSAP. Dr. Colm Kelleher was a principal program manager for BAASS (Bigelow Aerospace Advanced Space Studies), a subsidiary of Bigelow Aerospace, and was put in chare of hiring “more than 50 scientists, investigators, data systems experts, and others who spent three years probing UFO cases, interviewing eyewitnesses, collecting and analyzing physical evidence, and building what might be the world’s largest UFO/UAP databases on behalf of the D.I.A.”

The Knapp/Lacatski/Kelleher interview covers AAWSAP, AATIP (its replacement) and the process of writing the book, but the most interesting part is the partial summary of their findings. A few of the highlights:

That last point checks off all three surprised, stunned and stunned boxes – investigations into medical problems suffered by persons in contact with a UAP in Georgia. A shocking close second would be personnel at the Skinwalker Ranch being in contact with a “metallic/structured craft” and picking up and carrying away an anomaly as the result.

Shocked or skeptical? These are important new revelations if they’re true. Based on the amount of analysis given to the Tic Tac UFOs when they were made public, and the impact those revelations had on the Pentagon, this could move the needle closer to UFO disclosure. However, it’s important to note that the promo for the books states: “Skinwalkers at the Pentagon has been reviewed by the U.S. Department of Defense and CLEARED FOR PUBLIC RELEASE.”