It was previously reported that Earth’s most drought-tolerant microbes wouldn’t have a chance of surviving on Venus based on analysis of its atmosphere (some scientists claimed that there could have been microbial life in the clouds). And now, there’s even more bad news for our sister planet as a recent study claimed that there were probably never any oceans on Venus which means that it more than likely never had any life either.

While the surface temperature on Venus today is around 880 degrees Fahrenheit (471 degrees Celsius), it was believed that it wasn’t always that way. It was previously thought that billions of years of mild weather on Venus could have supported large oceans in ancient times. 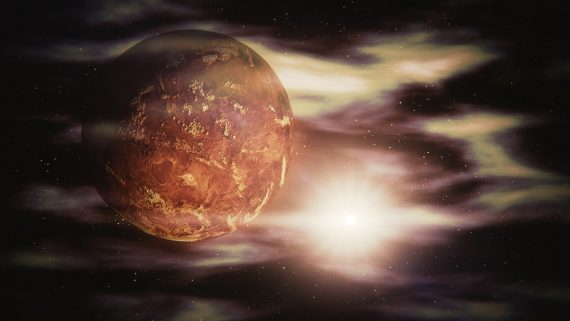 According to previous studies, when the planets were very young, Venus was exceptionally hot, but it was believed that it had cooled down enough that it could have supported liquid water – mostly because the clouds were thought to have blocked a lot of the sun’s radiation. And the fact that the sun was in its “faint young” stage, that would have been beneficial as well (its luminosity was only at 70% during that time).

However, a new study has claimed that our sister planet has always been way too hot to support any oceans. A team of scientists led by Martin Turbet, who is a postdoctoral researcher at the Geneva Astronomical Observatory in Switzerland, used a new model to simulate the climate on Venus in ancient times. They found that the clouds were located on whatever hemisphere was facing away from the sun; therefore, they wouldn’t have had any effect in blocking the radiation. In fact, it would have actually warmed the planet up. In short, this means that Venus was never cool enough for any rain to fall, so there wouldn’t have been any lakes, rivers, oceans, or even life.

What is startling is that the same thing could have happened to Earth if the sun would have been any more luminous during ancient times. As a matter of fact, if the young sun would have had a luminosity of 92% instead of 70%, we’d be in the same situation as Venus.

We’re very lucky that our young sun wasn’t any hotter or else we probably wouldn’t be here today. The study was published in the journal Nature where it can be read in full.

Astronomer Claims We May Already Have Images of Planet Nine