Over the years, many UFO researchers have sought to find the answers to a strange incident that occurred in Rendlesham Forest, Suffolk, England in the latter part of December 1980. An official report prepared by Charles I. Halt, Lt Col, USAF, Deputy Base Commander of the Royal Air Force Bentwaters base. Halt wrote the following: "Early in the morning of 27 Dec 80 (approximately 0300L) two USAF security police patrolmen saw unusual lights outside the back gate at RAF Woodbridge. Thinking an aircraft might have crashed or been forced down, they called for permission to go outside the gate to investigate. The on-duty flight chief responded and allowed three patrolmen to proceed on foot. The individuals reported seeing a strange glowing object in the forest. The object was described as being metallic in appearance and triangular in shape, approximately two to three meters across the base and approximately two meters high. It illuminated the entire forest with a white light. The object itself had a pulsing red light on top and a bank(s) of blue lights underneath. The object was hovering or on legs. As the patrolmen approached the object, it maneuvered through the trees and disappeared. At this time the animals on a nearby farm went into a frenzy. The object was briefly sighted approximately an hour later near the back gate."

The document continues: "The next day, three depressions 1.5 inches deep and 7 inches in diameter were found where the object had been sighted on the ground. The following night (29 Dec 80) the area was checked for radiation. Beta/gamma readings of 0.1 milliroentgens were recorded with peak readings in the three depressions and near the center of the triangle formed by the depressions. A nearby tree had moderate (0.05–0.07) readings on the side of the tree toward the depressions." 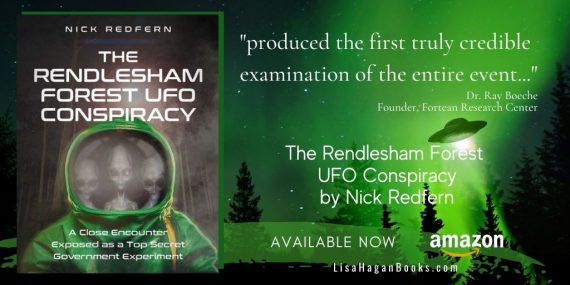 The document concludes as follows: "Later in the night a red sun-like light was seen through the trees. It moved about and pulsed. At one point it appeared to throw off glowing particles and then broke into five separate white objects and then disappeared. Immediately thereafter, three star-like objects were noticed in the sky, two objects to the north and one to the south, all of which were about 10 degrees off the horizon. The objects moved rapidly in sharp, angular movements and displayed red, green and blue lights. The objects to the north appeared to be elliptical through an 8-12 power lens. They then turned to full circles. The objects to the north remained in the sky for an hour or more. The object to the south was visible for two or three hours and beamed down a stream of light from time to time. Numerous individuals, including the undersigned, witnessed the activities in paragraphs 2 and 3."

UFO researchers consider the Rendlesham Forest affair to be one of the most significant UFO cases of all time. But is that really the case? Some say "No." What they do say, is that the whole affair was a sophisticated experiment, one designed to fool the airmen who encountered the “craft” into thinking they were encountering something extraterrestrial when, in reality, it was a hologram-drive ruse, one designed to see the extent to which the human mind could be fooled. Of the many UFO researchers who have studied the Rendlesham Forest affair, one is Ray Boeche. He is a long-time UFO investigator and priest, whose work in the field of UFOs is also referenced elsewhere in the pages of this book, and much of it relative to Boeche’s conclusions that the true UFO phenomenon is supernatural in nature. It’s not monsters we’re focusing on in this chapter, though. Rather, it’s the issue of what went down in Rendlesham Forest close to forty years ago. In November 1991, Ray Boeche had the opportunity to meet with two physicists working on a classified program for the U.S. Department of Defense. It was a program which had a direct tie to the Rendlesham Forest event of December 1980. I spoke to Boeche on this very issue back in 2007 and he detailed what he learned from his two informants. Boeche stated:

“I found it interesting that they would mention Rendlesham at the meeting. They said there was a sense that this was maybe, in some sense, staged. Or that some of the senior people there were more concerned with the reaction of the men – how they responded to the situation, rather than what was actually going on. That this was some sort of psychotronic device, a hologram, to see what sort of havoc they can wreak with people. But even if it was a type of hologram, they said it could interact with the environment. The tree marks and the pod marks at the landing site were indications of that. But how can you have a projected thing like a hologram that also has material, physical capabilities? They wouldn’t elaborate on this.”

Was a part of the Rendlesham Forest incident tied to the advancing technology of holograms? Yes, it seems so. But, as will now become apparent, there is far more to the case than that. Within the field of conspiracy theorizing, there are few greater controversies than Project Blue Beam. Allegedly, it is the brainchild of a secret group of powerful figures in, among many others, NASA, the United Nations, the Bilderbergers, the Trilateral Commission, and the Vatican. Project Blue Beam, so the story goes, will be at the forefront of a program to create a new society dominated by martial law and an iron-fist, world government. And how might such a government come about? By faking the second coming of Jesus Christ, specifically by using sophisticated hologram-type technology to project huge images of the Son of God across the skies of the United States, Canada, Australia, and much of Europe. Other parts of the world will see massive images of Buddha, of Allah, of Krishna, of Mohamed, and of multiple other supernatural entities, depending on the regions, the people and their cultures, and the beliefs of the relevant nations.

In mere days, however, each and every one of those images will merge into one far more sinister and terrifying image: that of the Anti-Christ, who will inform the people of Earth that not a single one of the world’s religions has the correct version of events. Only that of this nightmarish entity is the accurate version. As a result, the entire human race will be expected to bow down and worship the Anti-Christ. Such a thing will result in worldwide chaos, disorder, and anarchy - which the people behind Project Blue Beam shrewdly know only all too well. With the world plunged into states of fear and mayhem, this terrible ruse will then allow the United Nations to coordinate a planet-wide program to enslave the Earth’s entire population. The story is as fantastic as it is terrifying. But is it true?

The source of the bizarre Project Blue Beam story was Serge Monast, a journalist from Montreal, Quebec, Canada. Although Monast began in his career in regular journalism, by 1994, he was focused almost exclusively on conspiracy theories, including matters relative to Masonic-based conspiracy theories and matters relative to the one world government scenario. It was at this time that Monast claimed to have uncovered massive amounts of secret information on Project Blue Beam, and how it would be utilized to enslave all but that aforementioned elite. That Monast died in December 1996, of a heart attack, and at the age of just fifty-one, has led to suspicions that he was murdered by agents of this dangerous program. The reason: to prevent Monast from blowing the whistle, big-time, on the project. So what? Lots of people die in their fifties. And it doesn't have to be at the hands of the Men in Black.

As for my views on the Rendlesham Forest affair, I can see this story as being quite plausible. In fact, that was the theme of my 2020 book on the case, The Rendlesham Forest UFO Conspiracy. But, for Project Blue Beam, all I can say is that it's a garbage-filled piece of total crap, and it has no merit to it at all. A plot to take over the entire planet with holograms is just conspiracy-theorizing to ridiculous levels. Forget about it. A small, localized experiment in an English forest I can accept. The whole world? Not a chance.

Mysterious 30-Million-Year-Old Mass Extinction That Nobody Knew About