Recent years have seen an unprecedented—and by some measures, also an unexpected—rise in UFO interest, following the revelation in 2017 that the Pentagon had quietly maintained a program for years that kept an eye on the skies, and on the lookout for advanced aerospace threats.

Although the sudden recent UFO interest appears to have waned somewhat (and predictably, I might add), following the release of a blandly worded nine-page report delivered to the Office of the Director of National Intelligence back in June, it remains evident that the last few years saw one of the most significant surges in public interest—and interest shown by government agencies—in the UFO topic in recent memory.

Headlines like “UFO sightings hit all-time high, report says” argued that statistical increases in UFO sightings were occurring. This, countered by headlines like “Reports of rising UFO sightings are greatly exaggerated” where Astronomy contributor Eric Betz argued (perhaps also predictably, given all of the attention the subject was receiving) that there aren’t more UFOs all of a sudden, but rather, all of the interest simply had UFOs on more people’s minds. Regardless, the Mutual UFO Network (MUFON), which remains the largest civilian UFO organization today, says its memberships increased as a result of all the hubbub.

Reports from throughout the United States reached a crescendo in the Autumn months of 1973, possibly influenced by media attention that a report filed by then Georgia Governor Jimmy Carter filed with MUFON’s predecessor, the National Investigations Committee on Aerial Phenomena (NICAP), about an observation he had made four years earlier. 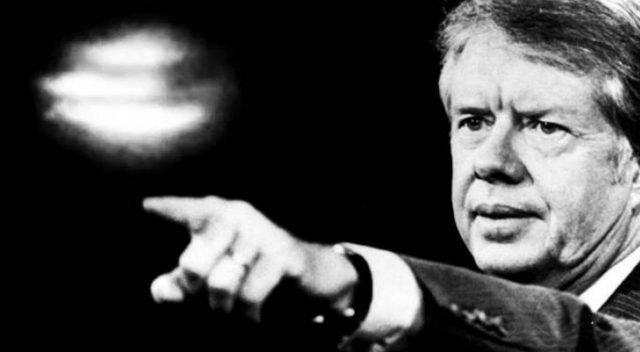 Within weeks, several Tennessee residents were reporting on an apparent rise in sightings of strange lights and triangular objects over their state in early September, and the following month, observations of egg-shaped flying craft began to also surface. In a notable account printed in the Pulaski Citizen, a group of teenage boys were said to have observed one of these egg-shaped UFOs land near the Anthony Hill community in Giles County, Tennessee, from which they watched “a large, hairy, stiffly walking occupant” emerged.

However, among the most widely reported incidents from the 1973 wave occurred on the evening of October 11, when a pair of men near Pascagoula, Mississippi, were fishing together after hours at the shipyard where they worked when they observed an egg-shaped object descending over the Pascagoula River, producing blue lights and an odd whirring noise as it moved over the water. The two witnesses, Charles Hickson and Calvin Parker, would go on to claim they were taken aboard the aircraft and examined by weird, robotic creatures in what became one of the best-known cases of alleged alien abduction in the annals of UFO studies.

Walter Sullivan, writing for the New York Times the same month the Hickson and Parker incident occurred, noted that, “Rarely, if ever, since Kenneth Arnold reported in 1947 seeing what came to be known as ‘flying saucers’ during flight near Mount Rainier in Washington State have there been such widespread reports of unidentified flying objects, or UFO's, as in recent days.”

Meanwhile, in Ohio a headline that would rival Sullivan’s appeared in the Monday, 22 Oct 1973 edition of the Lancaster Eagle-Gazette, titled “Helicopter Nearly Tangles With UFO.” It had been among the first articles that month that would recount the experiences of Army Captain Lawrence Coyne and three other servicemen that encountered an oblong-shaped UFO while flying to Cleveland after a routine medical examination earlier that evening.

According to their account, the men said their Huey helicopter nearly collided with an oblong shaped object with no apparent means of propulsion, which projected a green light into their cockpit as it hovered in front of them before taking off again at tremendous speed.

Safe it to say, none of the UFO events in recent years can quite compare to the kinds of stories that were appearing in American newspapers almost half a century ago, save only perhaps for the now widely discussed USS Nimitz incident that occurred off the California coast in 2004. Although UFO interest undoubtedly saw one of its most significant spikes in recent years, there has yet to be a string of sightings the likes of what happened in the final months of 1973, a year that UFO history buffs still count as being among the most important in the broader unfolding story of unexplained aerial phenomena throughout time.