Sinister Paranormal Entities and a Mass Haunting in England

Tucked away within the city of Manchester, in North West England, is a suburb by the name of Gorton. Known for its rich history and historical architecture, notably Gorton Monastery, a 19th-century High Victorian Gothic former Franciscan friary, it is a place also steeped in lore and tales of hauntings. One of the more spectacular of these supposedly occurred in the 1990s, when a typical, nondescript 70s housing development was held under siege by powerful paranormal forces that affected several families and changed their lives forever.

The housing development itself was mostly mundane in every way, just a narrow street with cookie-cutter modest houses tightly packed together, not the kind of place one might typically think to be haunted at first glance, but it would soon prove to be intensely permeated with strange phenomena that would terrify residents. One of the first families to realize that something weird was going on was a couple only known as Pam and Tony. The phenomena started innocuously enough, with anomalous noises and objects appearing in strange places, but then things graduated to moving objects and appliances, and lights and appliances turning on and off by themselves, even when not plugged in. Pam would say of one of these incidents:

Tony stayed over, because he wasn’t with me all the time, and he found that at the end of the night, about two o’clock in the morning, he went to actually turn off the television. So he went down on his knees and turned the telly off, then turned the lamp off, and then actually went behind the television and turned it off and plugged it out, and he was in pitch, pitch black then. So he got up and everything came on full blast. The telly came on, the light came on, full blast. So he ran straight up the stairs, got me and said ‘Pam we’ve definitely got a ghost!’ 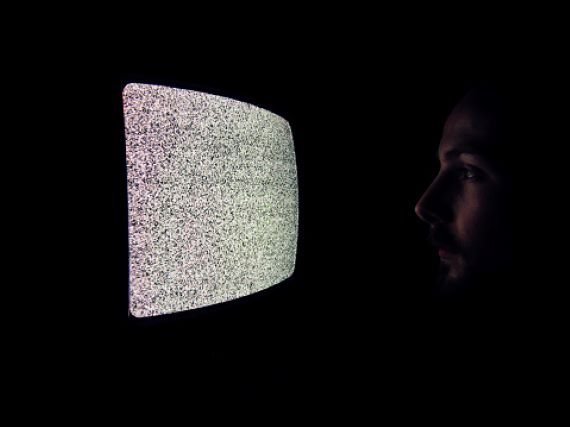 On another occasion, Tony noticed his dog acting oddly, staring at a spot in the room as if someone was there, even though they were alone. The dog had a bone in its mouth, and as the witness looked on in astonishment the dog began tugging on the bone as if someone was pulling on the other side. On one particularly frightening occasion, he claims the entity actually physically attacked him, of which he would say, “all of a sudden I got this big bang – in my ribs, in my back, sort of thing. And it just threw me. well, a good 12 foot.” His wife allegedly saw this happen, adding “I actually saw Tony being lifted up from the landing and actually land into the baby’s bedroom. Flat on his face. And I was just screaming.” The unseen force also started focusing its attention on their baby. Pam would say of this:

The baby was actually waking up at half eleven every night, crying out ‘babba babba’, so she was only just starting to talk then. So I thought I’ve actually had enough of this. So I moved her into the bedroom with me. And at certain times in the night she’d actually wake up, hold her arms out – nothing there – say ‘Ah, babba’ as if something was there. And then one minute I woke up one night, and she’d actually been put behind the headboard.

Another couple living not 100 yards away was John and Sandra, who would often hear disembodied voices and other weird sounds in the gloom at night when no one was there. After this, their young daughter began having night terrors and refusing to sleep in her room. John has said of some of these spooky incidents:

We were watching the telly, and Sandra had gone to bed, and I was asleep on the couch downstairs. And I woke up, and I could hear some whispering. And she’s got two armchairs, and I could hear some whispering from one chair to the other. I couldn’t understand what it said, I couldn’t make it out. But it was definitely somebody whispering to each other. A couple of weeks after that my daughter went to bed, I went up not long after, and she came to my bedroom about five minutes after I went to bed, shouting that a cold feeling from her ankles up her body went through her, and she couldn’t speak. As if she was paralyzed, she couldn’t speak, she couldn’t move. 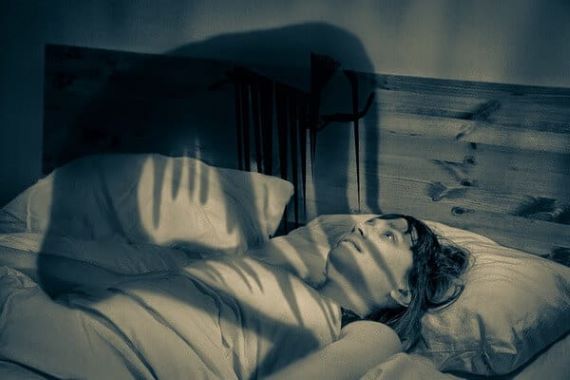 Yet another couple being held under siege by this apparently very grumpy entity was another neighbor, a couple called Mandy and Vinnie. It started with weird incidents with their toddler, which were somewhat similar to what was happening with Pam and Tony’s baby. Vinnie would say of it:

We were sat in the living room one night and we heard a muffled scream, well, more like a cry. When Mandy and myself went upstairs we found Chloe, the baby – she was in the cot with a blanket tied round her head. Chloe’s very frightened, she’s a different child altogether since this has all been going on. She more or less refuses to go upstairs, especially of a night time. In the day time she’s not too bad but of a night time she will not go upstairs. She just stands at the bottom of the stairs screaming.

They also experienced many instances of violent poltergeist-type activity, with plates flying off of shelves to smash against the wall, pots clashing together or rattling in the kitchen, and furniture flung about. This was all frightening enough, but then they started seeing the apparition of what appeared to be a young girl wandering about the premises at night, who would suddenly vanish into thin air, and which often seemed to stare at them with pleading eyes, as if wordlessly asking for help. This girl would then be joined by another ghostly child, this one a young boy, who would walk around crying and weeping. Another apparition was seen as well, which they described as a creepy old man with a maniacal grin, who would run through the house and disappear, often right after the girl or boy had appeared, as if he were chasing them. Rather eerily, Vinnie would learn that there had been a pedophile who had once lived on a farmhouse at the location back before the housing development had been built, saying:

This house and the house next door was a farmhouse. Now in my hallway, that used to be a ginnell between the farmhouse from room to room. Apparently a man lived there, and he had so many children captive there, so many years ago, and he, he was a nasty man, he’d done dirty deeds with these children. 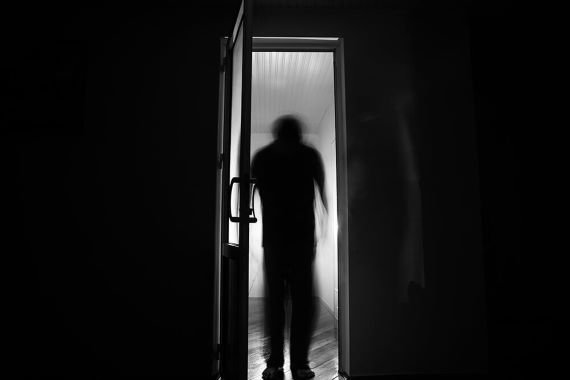 Terrified and at their wits end, the residents tried to bring in a priest, but this didn’t lead to much, as the church didn’t seem to take their case seriously enough to really investigate. Although one priest did come to take a cursory look at the affected houses, he was oddly quick to dismiss it all. Next, they went to their housing officer, knowing full well how crazy they were probably going to sound but unsure of where else to turn to. The housing officer was also skeptical at first, but after interviewing all three families and seeing their genuine fear and hearing their desperate pleas to let them move out he became more and more convinced that perhaps something truly strange and unexplained was going on. Since the housing officer had no experience with this sort of thing, he contacted paranormal investigators from the Stockport Ghost Society, who came in to do an investigation and did not go away disappointed. One of the investigators would explain of the situation and what they saw:

The council didn’t know what to make of it, they didn’t know who to turn to, so they got in touch with us. So we came down. And the first thing we do, obviously, is interview the tenants. At the end of the interviews we found it really uncanny that all the people were giving the same sort of story. So with the council’s permission and the tenants’ permission, we got a number of people together from the ghost society. One night we were all sat very quiet one night in this house. I was sat at the back of the room, one of my colleagues was sat in an armchair facing me. It was very quiet; we had the light subdued but not dark enough as you couldn’t see each other or see the surroundings. I was just sitting, watching, listening – it was very quiet. And then suddenly at the side of my colleague Barbara appeared a fourteen, well what appeared to be a girl, a young girl, that I estimated to be at least fourteen years old. Although she only remained for at least three to four seconds, it was long enough for me to get a description of her, and to write it down. And the description was – yes, she appeared at least fourteen to fifteen, she had long hair, sort of lightish brownish hair, she had a very dull grey long dress on, up to her knees. She had what appeared to be greyish socks on, which didn’t quite come up to her knees and left a gap between the edge of her dress and the top of her socks. And brownish shoes. But whether it was imagination on the shoe side of it, it appeared that she had one shoe that was built up, and gave me the impression that she had one leg longer than the other.

They brought in a psychic medium to help them try to make some sense of what they were dealing with, and she immediately sensed an evil presence. As she went about checking one of the houses, she would claim that she saw a “hooded, dark clothes, not a dark person, but a dark entity” on the stairs. She also claimed that she sensed “pockets of bad energy” within the affected houses, but not in those that had not been haunted. As to what this malevolent entity was, she could not say, except to say that it was not human. When the TV show Ghost Hunters did an expose on the case, they managed to dig up some more information, finding that the site had long ago served as a church burial ground, but what connection this might have to the hauntings is anyone’s guess. The tenants ended up moving away, after which the area seems to have gone quiet. We are left to ask what was going on here? What kind of supernatural forces were gathering here and why did they target these particular families? Did it have something to do with the land itself or its history, or was this something else? Whatever the case may be, it remains a chilling and inexplicable set of terrifying accounts that we may never truly solve.

Crashed UFOs: Why We Have to be Very Careful About Their Validity. Or Not