Strange Tales of the Haunted Screaming Skulls of England

In the world of the paranormal, there have long been tales of supposed haunted objects. These can take many forms, and throughout the lore of England, there have long been tales of mysterious haunted skulls. In former times, it was not uncommon for families to keep skulls in their homes, with the earlier lore saying that they served as providing luck and protective magic for the home and family, a sort of guardian for the family. It later times the legend would evolve somewhat, into more ominous tales of vengeful spirits attached to these skulls, angry at wishes that weren’t fulfilled in life or wrongs that had been carried out against them. In these cases the skulls could erupt into paranormal activity, bad luck, and the most well-known phenomenon being that they would wail or scream. One researcher and historian David Clarke has said of the traditions of these skulls:

A Dwelling place has a human skull which has been kept for hundreds of years in an important part of the house, in a specially made wall niche, on a prominent windowsill, or beside a hearth. The origin of the skull in unclear, but in oral tradition the date when it took up residence is often placed outside living memory, between the fifteenth and eighteenth centuries, usually as the result of violence, for example murder or execution. Under no circumstances must the skull be removed from its resting place in the building, this being emphasized in all the stories as the most important theme. If the skull is disturbed then outbreaks of paranormal, poltergeist-like phenomena will plague the residents of the house until the skull is replaced in its favorite place 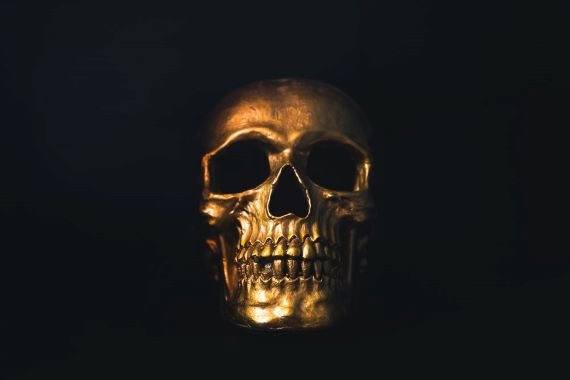 In some cases, these skulls became unruly because of the circumstances of their deaths, usually those who had died violently, in others because their dying wishes hadn’t been met, and in other traditions their skulls had been moved, removed from their home, separated from its body, or defiled somehow. Such skulls would cause all manner of supernatural phenomena, misfortune, bad luck, and even death upon those around them until they were appeased, and their most noteworthy feature is that they would issue forth screams and howls, to the point that they would be collectively referred to as the “screaming skulls.” The common idea was that there was a spirit attached to the skulls, with such stories going back to at least the 16th century, and over the centuries there have been many tales of these screaming skulls that truly stand out.

Perhaps one of the most famous stories of a screaming skull comes to us from the stately and elegant Bettiscombe Manor, in Dorset, which has long been the ancestral home of the Pinney family. The story here begins in 1685, when the manor’s owner at the time, Azariah Pinney, was arrested for his part in activities connected with the English Civil War. He would be banished to the West Indies, yet somehow crawl back into the position of a wealthy landowner and return to England with a trusted and loyal slave. Unfortunately, this slave would soon fall ill, and on his deathbed, he begged Pinney to return his remains to the West Indies, where he belonged. Pinney promised, but after the man actually died, he was simply buried in the local cemetery with little ceremony or fanfare. After this, the manor was besieged with all manner of paranormal activity, with doors slammed, furniture tossed about, and the sound of screams reverberating through the entire property.

Pinney believed that the deceased slave was vengefully haunting them, and went about having the remains exhumed, taken from the grave and placed within the manor. This seems to have stopped the haunting somewhat, and over the ensuing centuries the remains would disappear until there was just a skull. The story goes that if the skull is moved or disturbed in any way it will issue forth ear-piercing shrieks and screams, and even cause those who remove it from the house to drop dead. To this day it remains in its proper place, and one historian would say of it in 1910:

At a farmhouse in Dorsetshire at the present time, is carefully preserved a human skull, which has been there for a period long antecedent to the present tenancy. The peculiar superstition attaching to it is that if it be brought out of the house the house itself would rock to its foundations, whilst the person by whom such an act of desecration was committed would certainly die within the year. It is strangely suggestive of the power of this superstition that through many changes of tenancy and furniture the skull still holds its accustomed place 'unmoved and unremoved!

Rather oddly, the screaming skull of Bettiscombe Manor was examined in 1963 and found to be actually that of a woman who lived between 3,000 and 4,000 years ago, so it is thought that the present skull was not that of a slave, but rather remains pilfered from an Iron Age burial site nearby. What is going on here? Who knows? Another rather famous screaming skull belongs to Wardley Hall, in Manchester, where it sits in a specially crafted niche. The origin of the skull is a bit hard to pin down. According to one tale, it belonged to a criminal named Robert Downes, who in 1676 was bested by an intended victim, after which his head was cut off and thrown into the Thames River off of London Bridge. Downes’ sister lived at Wardley Hall, and one day she received an anonymous package which contained his head. As soon as this package arrived, the hall was apparently overcome with violent paranormal activity, only ceasing when the skull of the head was placed within the niche and put to rest, but if it is ever moved it is said to scream incessantly. 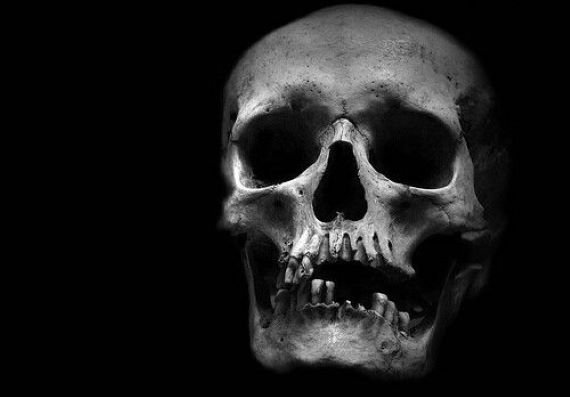 Another story of the origins of the Wardley Hall skull is that it is that of a Catholic Father Ambrose Barlow. The tale says that he was arrested by Protestants, after which he was hanged, drawn and quartered, his head removed and placed on a pike as a warning to Catholics and Catholic sympathizers. The head was eventually retrieved by Barlow’s compatriots and brought to Wardley Hall, after which it was said to scream and wail if disturbed. The skull would go missing for some time, which was met with intense hauntings at the hall, after which it was returned in the 1740s, to this day said to scream if disturbed in any way. One account of it from 1782 says:

From time out of mind the occupiers of Wardley Hall have had a superstitious veneration for the skull, not permitting it to be removed from its place on the topmost step of the staircase.  There is a tradition that if removed or ill-used, some uncommon screaming and lamenting is heard, and disturbances take place in many parts of the house.

Yet another mysterious screaming skull supposedly resides at Burton Agnes Hall, in Yorkshire. According to the lore, a woman named Anne Griffiths was attacked and beaten by bandits, leaving her mortally wounded. On her death bed, she supposedly requested that her head be removed and buried in her home at Burton Hall, but she ended up being buried in the village cemetery. After this, the hall was plagued with all manner of supernatural mischief, such as slamming doors, anomalous noises, and moving objects, until her family decided to cave in to her dying wishes in an effort to appease her restless spirit. Anne’s body was exhumed, her skull removed, and it was then bricked up in a wall near the main staircase. After which the haunting stopped but a wailing would occasionally be heard emanating from that spot, which can supposedly be heard from time to time to this day.

Similarly, there is another supposedly walled off screaming skull at Calgarth Hall, in Windermere, Cumbria. A Justice of the Peace by the name of Myles Philipson who owned Calgarth Hall, wanted a couple who were holding out to sell their land so that he could add it to his estate. They refused, so he one day invited them over for dinner, but they were then framed for stealing a silver cup. They were found guilty and hanged, after which two skulls mysteriously appeared on the premises. These two skulls would apparently scream and moan incessantly until they were finally bricked up into the very structure itself, after every attempt to discard them ended up with them appearing right back where they started. 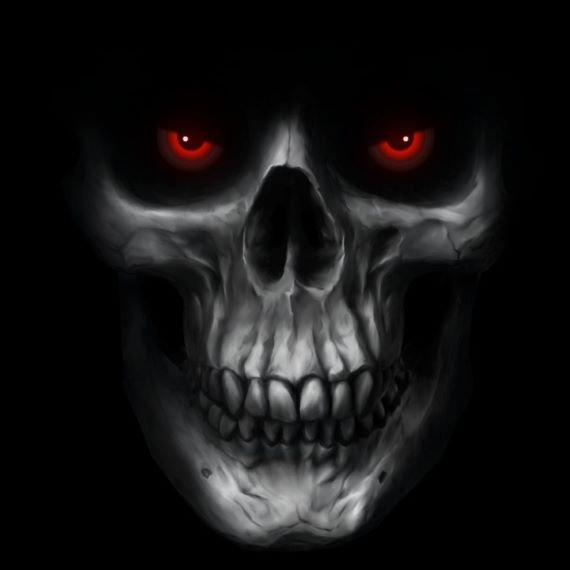 One very well-known tale of a screaming skull comes from a place called Tunstead Farm, located between Whalley Bridge and Chapel-en Le Firth in Derbyshire. The skull, mostly known simply as “Dickie,” has rather murky origins. The most popular story is that it belonged to a soldier named Ned Dickson, who returned from war to move into the Tunstead Farm, much to the consternation of his cousins, who had not expected him to ever come back. In order to make sure they kept the property, the cousins apparently killed Dickson in his sleep, beheading him and unceremoniously burying his body in a shallow grave. This was followed by an intense haunting of the property, with the entity even attacking them physically, and when they consulted with a local witch, she told them to exhume the remains and sequester the skull within the grounds. The skull was placed within the farm as directed, the hauntings ceased, and it actually seems to have become a sort of guardian of the property, causing an apparent curse on a railroad that was being built through the area and preventing the estate from being robbed. Thieves who would dare to enter did so to the wailing and screaming of the skull, and it will apparently still act up to this day if anyone tries to move it.

There are many other stories such as these, and the screaming skulls have become a part of the landscape of the paranormal in England. What is going on here with such cases? Is this some sort of spiritual attachment, in which a ghost will gravitate towards an object, in this case a skull? Or is it just pure folklore and spooky stories of yore? Whatever the case may be, England is rife with the tales of the screaming skulls, and it is an often under looked phenomena in the world of the paranormal.

The Space Program We Don’t Get to See: The Top Secret One, of Course