That's quite a title for an article! But, you'll quickly see why I chose to use it. Kenneth Goff is detailed in Federal Bureau of Investigation papers of May 1955 as being "...a self-styled freelance Evangelist who for the past number of years has been speaking around the U.S. regarding the threat of communism to the U.S.” Lectures that Goff routinely delivered to interested parties included: Treason in our State Department; Should we use the Atom Bomb?; Red Secret Plot for Seizure of Denver; and Do the Reds Plan to Come by Alaska? As the FBI additionally noted: "Also, some of the titles of Goff’s books, which he publishes voluminously are: 'Will Russia Invade America?', 'One World, A Red World, and 'Confessions of Stalin’s Agent.'" J. Edgar Hoover's papers show that the FBI had other worries about Goff, too. Goff was a devoted Red who, eventually, turned away from it all. However, there were some in Hoover's Bureau who wondered if Goff still had his communist beliefs, and was just pretending to have given it all up. Indeed, Goff was enigmatic and mysterious to a significant degree - and an absolute hassle to the FBI.

The FBI certainly had a huge stash of material on Goff, who - it was detailed in Bureau documentation released under the terms of the U.S. Freedom of Information Act - had been a "self-admitted former member of the Communist Party," and who "…was found guilty by jury trial on February 25, 1948, in United States District Court, District of Columbia, and was fined $100 as a result of the subject’s placing anti-communist signs before the Soviet Embassy in Washington, D.C." Other files on Goff in the FBI's archives say: "The ‘Rocky Mountain News' on October 25, 1951, contained an article stating that three Englewood persons were ordered to appear in Denver Municipal Court as an aftermath of the ripping of the Soviet flag yesterday at Civic Center." Mr. and Mrs. Goff were two of the trio. It's no surprise that there were still those in the FBI, however, who strongly suspected that the flag-ripping affair was meant to make the FBI think that Goff had left his communist beliefs behind him, when that may not have been the truth of the matter, at all. 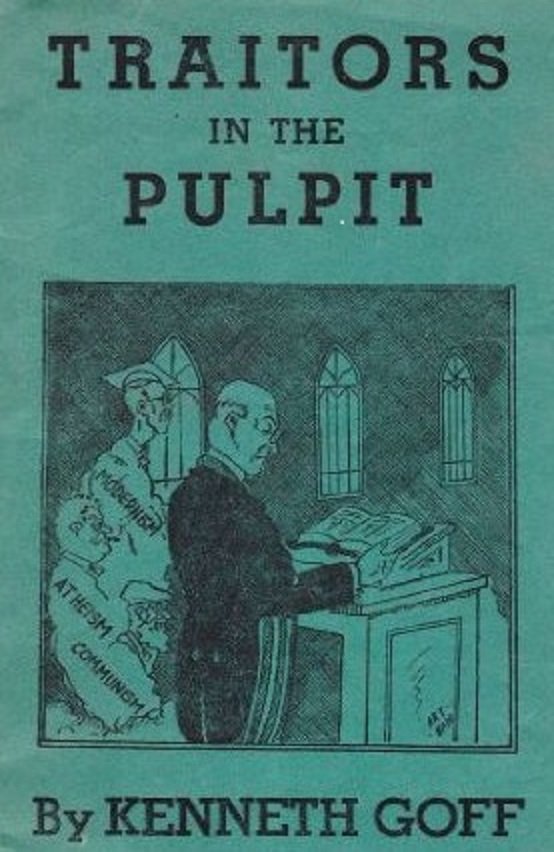 Goff was certainly an interesting character. He had made vocal statements in the fifties about Russia-driven plots to secretly pump fluoride into America's water-supplies, and to provoke what Goff termed a "spirit of lethargy” all across the country. Not only that: Goff was someone who, since the Kenneth Arnold affair of 1947 occurred, had been deep into the UFO subject. Goff's theories and conclusions, though, didn't go along with the well-known UFO researchers of the era - such as Coral Lorenzen, Donald Keyhoe and Leonard Stringfield. So interested was Goff in UFOs that he went on the lecture circuit and eagerly talked about the mystery. His Flying Saucer lecture was headed Traitors in the Pulpit, or What’s Behind the Flying Saucers – Are they from Russia, Another Planet, or God? A study of Goff's pamphlets and booklets show that he wasn't too concerned about aliens. Rather, he was far more worried about the UFO subject being secretly manipulated by the Soviet Union.

In his 1959 publication, which was titled Red Shadows, Goff got right to the crux of his thoughts and told his audiences the following words: "During the past few years, the flying saucer scare has rapidly become one of the main issues, used by organizations working for a one-world government, to frighten people into the belief that we will need a super world government to cope with an invasion from another planet. Many means are being used to create a vast amount of imagination in the minds of the general public, concerning the possibilities of an invasion by strange creatures from Mars or Venus. This drive began early in the 40’s, with a radio drama, put on my Orson Welles, which caused panic in many of the larger cities of the East, and resulted in the death of several people. The Orson Welles program of invasion from Mars was used by the Communist Party as a test to find out how the people would react on instructions given out over the radio. It was an important part of the Communist rehearsal for the Revolution."

In light of all the above, it's not surprising at all that the FBI had such a huge set of files on Kenneth Goff. He died in 1972.