In September of 1956, the eminent engineer Dr. Harvey Slatin and his artist wife, Yeffe Kimball, purchased a 4-story red brick residential building at 11 Bank Street in New York City's Greenwich Village. The structure was around 125 years old, and their plan was to renovate it and restore it into its former glory as a boarding house. When they moved into the place, it seemed perfect for them, but almost as soon as they moved in things would get strange when they began to hear what they thought sounded like a woman’s footfalls upstairs when no one was there. At first they thought it was just their imagination, or the settling of the very old building, but the footfalls would grow heavier and more insistent as the days went by, sometimes joined by what sounded like a light hammering, and it was obviously the sound of someone walking around upstairs and not just the wind or the house settling. From here there would begin a very strange case of paranormal phenomena, a restless spirit, and haunted ashes.

Thinking there was an intruder, they took to sitting around waiting for the footsteps, only to rush upstairs to find no one there. It seemed that the sounds happened most often in the daytime between the hours of 11 a.m. and 4 p.m., and they were also heard by the maid, the carpenter helping with the remodeling, and friends who came over to visit, but no one had a good explanation for it. Considering that Dr. Slatin was a respected scientist who had worked on the Manhattan Project, he was a rational and level-headed professional who was not quick to jump to ghosts, but as the phenomenon continued, he wasn’t so sure. The good thing was that the sounds didn’t seem to be particularly threatening, and Slatin would say of them, “I'd call them rather friendly sounds; a wee bit spooky, maybe, but somehow not frightening.” The strange sounds continued on and remained completely unexplained, but as they were harmless they learned to just sort of live with it. 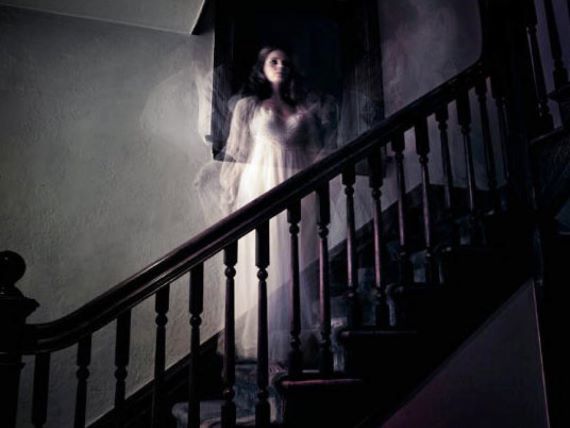 In February of 1957, the carpenter was knocking out a ceiling with a hammer to do some repair work when along with the falling plaster and dust fell a black metal container a bit larger than a coffee can, which thumped loudly to the floor. It was a strange thing to fall from a ceiling, so the carpenter picked it up to examine it and was surprised by what he saw. There on the side of the container was a weathered old label that held faded type lettering that said “The last remains of Elizabeth Bullock, deceased. Cremated Jan. 21, 1931. United States Crematory Co., Queens, NY.” There was also a stamp into the metal at the top corner that read “37251.” The carpenter then got a flashlight to look through the hole from where it had come, but there was nothing else there, just dust, mold, and rafters. Considering the paranormal phenomena, they had been experiencing it was a bit of a spooky find, so when he went to show the container to tell Mrs. Slatin about what he had found, he jokingly said, “I'm leaving the job. I've found the body.”

When he came home, Dr. Slatin called the crematorium and verified that the cremated remains were indeed real, and that they had really belonged to 51-year-old Greenwich Village resident and Irish immigrant Elizabeth Bullock, who had died after being hit by a car in January of 1931. However, the weird thing was that Bullock had never lived at 11 Bank Street, but rather 113 Ferry St. in Greenwich Village, so at the time it was a mystery as to how her remains had ended up in the ceiling there. Also rather odd was that Mrs. Slatin would recall that a few weeks prior to the discovery of the ashes, a young, well-dressed man had come by looking for a room, and when she told him she didn’t know when the rooms would be ready, he had given her a card with the name “E. C. Bullock” on it. It is unknown just what relation he had to the dead woman, but considering that there is no evidence that they ever had children, it certainly was eerie.

After finding the container of ashes, the Slatins decided that rather than bury them out in the yard like everyone suggested, they would keep the container on the grand piano in their living room. Immediately after the ashes were moved to their new resting spot, the disembodied footsteps and hammering stopped to leave the house in peace and quiet, as if the spirit had been appeased somehow. Interestingly, the spirit would still make appearances during parties at the residence, opening and closing doors and stomping feet as if dancing, which was all taken as a playful and friendly gesture by all present. As all of this was going on, the story was being picked up by the news, with the media calling it “The Ghost of 11 Bank Street,” and this all caught the attention of the renowned paranormal researcher and ghost hunter Hans Holzer, who moved in to investigate along with a spirit medium by the name of Ethel Meyers. At the Slatin residence, they held a séance, which proved to be successful when Meyers claimed to have made contact with a spirit calling itself “Betty”, before going into a trance to allow the ghost to speak through her in a strong Irish brogue. 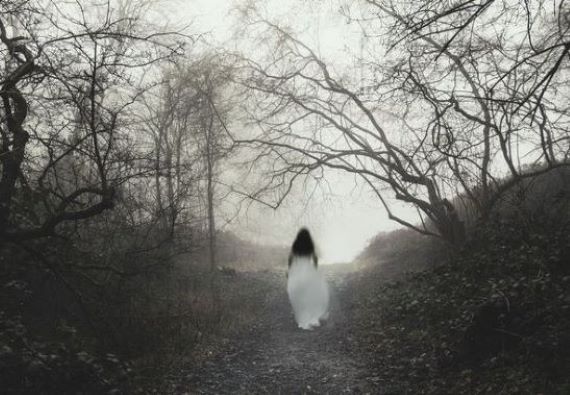 The spirit claimed that she had been an Irish Catholic disowned by her family when she married a Protestant, and that basically when she had died her husband and family had fought over her remains, her family wanting to give her a Catholic burial in the family plot and Edward wanting her to have a Protestant burial. The ghost claimed that she herself had not wanted to be buried in the family plot, and so Edward had stolen her remains and then brought them to 11 Bank Street to hide them from her family. The spirit would explain through Meyers:

He didn't want me in the family plot--my brother--I wasn't even married in their eyes...But I was married before God...Edward Bullock...I want a Christian burial in the shades of the Cross--any place where the cross is--but not with them! Ma never forgave me. I can never go with her and rest. I don't care much. When she's forgiven me, maybe it'll be all right...only where there's a green tree cross--and where there's no more fighting over the bones...I want only to be set free, and there should be peace...I never had anything to do with them...Just because I loved a man out of the faith, and so they took my bones and fought over them, and then they put them up in this place, and let them smoulder up there, so nobody could touch them...foolish me!

After this her husband had passed away without ever being able to do anything with the ashes and they had been forgotten in the dark of that hiding place within the ceiling. She told them that she had been at peace since being released from the attic, but also expressed her wish to have a proper burial in a Catholic cemetery in ''the shade of the Cross.” It has a ring of truth to it, as Edward Bullock was found to have lived in the building from 1942 until his death in 1949, giving it an eerie twist.

It is unknown how true any of what the medium was saying was as far as the ghost was concerned, but the Slatins certainly believed it, and in 1981 Elizabeth would finally get what was alleged to be her wish -- the Slatins received a letter from a priest named Thomas Devereaux, in Loleta, California. He had heard about the story and reached out to them in order to offer the remains a proper burial at St. Patrick's Loleta Table Bluff Cemetery among many other Irish Catholics.  The family accepted the offer, and Bullock was finally laid to rest, buried beneath a cedar cross with a simple message on her grave that read ''Elizabeth Bullock Died 1931 - Buried 1981” and fifty people in attendance.

Interestingly, even after this burial, the ghost of Elizabeth Bullock would continue to make herself known during parties at her old haunt from time to time, and it seems that in the end it was a happy ending for everyone. It is all a very odd little case with a lot of unanswered questions. It is still not known for sure just who Elizabeth Bullock really was or how her ashes ended up in that ceiling. We don't know why she would have felt compelled to stick around after death, or even if the stories of hauntings are true or not, although they were corroborated by many witnesses. In the end, it is an odd historical oddity and a more obscure tale of a haunting to add to the pile, but at least in this case it all got a happy ending.