The Strange Tale of the Mysterious Triplets Experiment

One day in 1980, 19-year-old Robert Shafran, of Scarsdale, New York, was in high spirits as he made his way to his new school at Sullivan Community College, in the Catskills. He had his whole life ahead of him, and was looking forward to meeting new people and starting the next chapter of his life, the horizon seemingly limitless and stretching out into a bright future. When he arrived at the school, he was a bit surprised when everyone recognized him and acted like they knew him, although he had never met any of them before. He was also being welcomed back, and when he denied knowing any of them or of having ever left and come back, one student by the name of Michael Domnitz put him in touch with a young man by the name of Edward Galland, who’d dropped out of Sullivan the previous year, swearing that they looked as if they could be twins. Shafran decided to call this supposed doppelganger, and from here would unfold a strange story of synchronicity and secret government experiments on the links between twins and triplets.

When Shafran called Galland, he was immediately amazed with how much their voices sounded alike, and the two quickly made arrangements to meet. When they did, it was like staring into a mirror, the two almost indistinguishable from one another, and since they were both adopted it would soon be known that they were indeed long-lost twins. This bittersweet story of separated twins being reunited would hit the news in a big way, and it would seem that the odyssey was not over just yet. One other young man who watched a segment on the two brothers from afar immediately recognized them because they had the same face as him. Also adopted, David Kellman, a student at Queens College, felt that something truly weird was going on, and decided to head out to Sullivan to see what he could find out. When they met, they all stood in a circle staring at their own faces, and it would turn out that they were in fact triplets. What was going on here? For that we have to go back in time a bit. 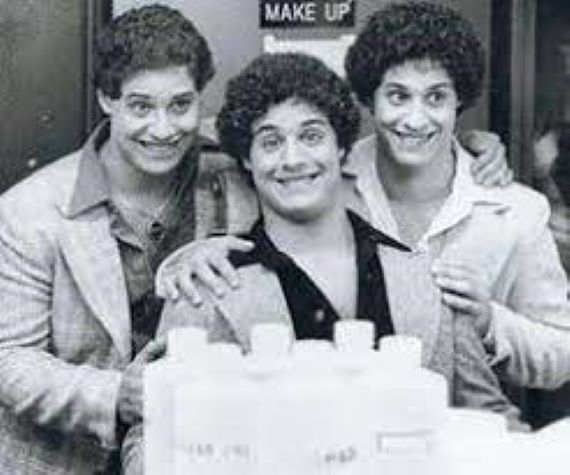 On July 12, 1961, a set of baby boy triplets were born to a teenaged mother at Hillside Hospital in Glen Oaks, New York. The mother could not take care of them, and so turned them over to the now-defunct Manhattan adoption agency Louise Wise Services, after which they caught the attention of an organization called the National Institute of Mental Health. The institute was working on a child development experiment to test the idea of nature versus nurture, and had decided one way was to move in to separate twins and triplets from birth and send them off to separate foster homes in order to see how similarly they turned out. The study was carried out by child psychiatrists Peter Neubauer and Viola Bernard, who quickly moved in to have the triplets split up and moved to different homes through the Louise Wise adoption agency, with each boy carefully placed in working class (Kellman), middle class (Galland) and upper middle class (Shafran) families in order to better gage the differences and similarities between them despite different upbringings. This went according to plan and the study continued.

Over the years, their lives and behavior were monitored and tracked by the researchers, with both the kids and their adoptive parents completely unaware that they had two other identical siblings out there, all strategically placed within 100 miles of each other. Others were being studied in much the same unethical fashion, including several sets of identical twins, all adopted through the same agency and none of whom had the slightest idea of what was really going on. The parents were only told that the children were part of an ill-defined developmental study, allowing the researchers continuing access to the children for study, but none of them were ever told about exactly what it all entailed. This research would go on until 1980, when the state of New York began requiring that twins and triplets be kept together, but even then the three young triplets were not told that they had siblings they had never met. In the meantime, the head of the project, Neubauer, knew that his research would be seen as controversial, and so declined to write any papers on it.

The study itself uncovered some interesting results. At just the age of 3, all of the brothers began exhibiting strange behavior, such as throwing tantrums and banging their heads against tables and walls, later recognized as separation anxiety. As they grew older, they all had various mental issues, with each one of them eventually going in and out of psychiatric hospitals, yet the researchers did nothing but watch from afar as this took place. Kellman would later lament of this, “Those who were studying us saw there was a problem happening. And they could have helped. That’s the thing we’re most angry about. They could have helped and didn’t.”

As soon as the triplets were reunited completely by chance and found out what was going on, they became media sensations, appearing allover the news and on various TV programs and talk shows. The three brothers moved in together and even opened a restaurant in Soho together, and they would briefly meet their biological mother, who wanted nothing to do with any of it and did not want a relationship with them. In the meantime, the adoptive parents uncovered the secret experiment and planned to pursue legal action, although this eventually fell through since there had been no clear rules governing behavioral studies and there had been no laws prohibiting the separation of twins when this had occurred. Tragedy would hit in 1995 when Galland, who was exhibiting increasing signs of bipolar disorders and other mental health issues, took his own life. This put a strain on the two remaining brothers, and they drifted apart after that,

You might be wondering whatever happened to the puppet master behind the whole project, Neubauer. In the end, he would never publish his findings, nor show any remorse for what he had done. The research he had done was turned over to Yale and locked away to only be opened in 2065, and indeed he always refused to discuss it at all, only mentioning it in passing in his 1996 book Nature's Thumbprint: The New Genetics of Personality, after which he would die in 2008 to take any secrets he had to the grave with him. The whole case has gone on to be the subject of a documentary directed by Tim Wardle, titled Three Identical Strangers, and it has shown that there seems to be no limit to the depraved depths that some scientists will go through to try and prove some point. There seems to be clearly be some connection between twins and triplets, possibly even a psychic one, but it this really the way to go about trying to prove it? For now, this ominous experiment has been put to rest, but there have no doubt been others, and we are left to wonder just how far we can go to dig at these mysteries.

More on the Philadelphia Experiment: “They just sort of vanished into thin air”