UFO Debris and a Strange Saga Involving the Russians: A Weird Government Document

When someone asks you what's the weirdest UFO-themed, U.S. government document you've ever crossed paths with, it's not easy to reply. However, I can say for sure that there's one story that really stands out. Even to this day, and after more than a decade of looking into the file, I still don't know what to think about it all. So, for that reason I'll share it with you, the readers! I'm not sure if the document concerns a genuine UFO case, or if the key player in the story - an old man, at the time - was in the throes of Alzheimers or something similar. In a  November 13, 1952 document - titled Unconventional Flying Objects Sighted; And Portions Recovered By [First Name Deleted] McLean, Friona, Texas, prepared by the U.S. Air Force Office of Special Investigations at Tinker Air Force Base, Oklahoma City, Oklahoma, and marked for the attention of the Director of Investigations at Washington, D.C. - the following was disclosed: "SYNOPSIS: Special Agent in Charge, Dallas, Texas, Texas Field Division, FBI, advised this district that [First Name Deleted] McLean of Friona, Texas, had reported seeing flying saucers at an unnamed point in New Mexico; had recovered three fragments which landed close to him; and had notified the Pentagon but hearing nothing had sold a portion of one object to a Russian scientist from the USSR Embassy." That's where it gets very strange. 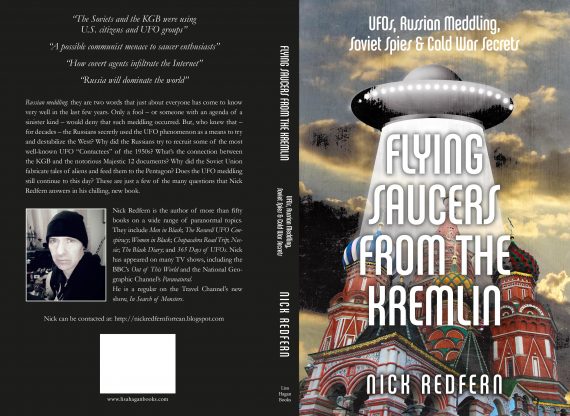 The document continues: "FBI received information to the effect that McLean had written a letter to an unnamed friend in Amarillo, Texas, and it read in part as follows: "but to get back to flying saucers that are real, recently I was camped on a mountain in New Mexico and saw a dim light at first circling around up high. It circled in a mile across circle but kept descending. First the light was white but as it got lower it turned green and exploded showering light objects in all directions. Several of those fiery objects landed close to me, most of them were buried in the ground, but I gathered up three that were only partly buried and brought them home with me.'"

The document continued: "I notified the Pentagon in Washington what I had saw fall. I heard nothing from them but a Russian scientist from the U.S.S.R. Embassy did come and buy one half of one of those objects. It was so hard we had to use a sledge hammer to break into. In the center was a round hole or vacuum filled with fine powder. This scientist scraped every bit of the dust up and put it in a bottle. He claims the object was uranium and other unknown minerals." The document adds: "Mr. and Mrs. McLean, Friona, Texas, were interviewed and Mr. McLean advised that he was a retired farmer. He stated that he had always been interested in meteors ever since he took a correspondence course concerning meteors some 50 years ago. McLean stated that in the spring of 1952 he was traveling in the eastern part of San Miguel County, New Mexico, with his wife, when he found a large deposit of a metal unknown to him. He stated that he picked up a piece of this metal and brought it back to Friona, Texas, with him. Mrs. McLean verified this statement inasmuch as she stated that she was with him at the time he picked up the metal."

The Air Force didn't stop there: "McLean advised that shortly after he wrote to the two senators about this material he was visited by an unknown individual who, according to McLean, displayed the credentials of the Soviet Embassy. McLean was asked to describe the credentials of this person and stated that they were very similar to the credentials of the writer but that the writing was in Russian. McLean was then asked if he could read the writer’s credentials, and he stated that he could not read very well but he felt sure that they were in English. McLean could not place the time of this visit and could furnish no other information concerning this alleged individual with the exception of the fact that he stated that he thought this individual came from the Russian Consulate in Amarillo, Texas. McLean stated he was no longer in possession of any of the unknown material inasmuch as he had recently given the remainder of the material to his wife’s nephew, Mr. [Deleted] of Lawrenceville, Illinois."

If that wasn't enough, the file got stranger and stranger: "It was also pointed out that in the letter set out above McLean advised that he sold half of the material to the representative of the Russian Embassy. At the time of the interview he emphatically denied selling any of the material to the representative of the Russian Embassy and stated that he could not remember having made such a statement in the letter to the individual in Amarillo, Texas. Deputy Sheriff C.M. Jones, Friona, advised that he had known the subject for many years and advised that the subject is an elderly man approximately 71 years of age. Jones advised that the subject has nothing whatsoever to do and is somewhat of a dreamer. Jones explained that McLean dreams of various things and then thinks about them to the extent that he actually believes what he dreamed. Jones stated that the subject will then come to the downtown section of the little town of Friona and attempt to convince people that his dreams are actually the truth. Jones stated that the people of Friona, Texas, very seldom believe or put any faith in any matters discussed by the subject due to his mental condition."

A man whose mind was deteriorating - and deteriorating fast - or a genuine Flying Saucer affair involving U.S. intelligence, UFO debris, and the Soviets? Or, possibly, a bit of everything? After so many years of looking into this case, I'm still not sure.