Archeologists know the place to find the best stuff at an ancient dig site is wherever the people who lived there dumped their trash. Police looking for evidence know the best place to look for it is in the trash. If this is such a good way to solve a mystery, why aren’t astronomers looking through the trash to find evidence of extraterrestrials visiting Earth? Before we answer that, ask yourself this question – where would aliens toss their trash? If your answer was someplace on the surface of our planet, move to the back of the line and try again.

“In this paper, we present an overlooked and, in terms of feasibility, simple SETI strategy. It attempts to answer the question whether any space-faring civilization has surveilled the Earth by means of probes at any point in history.”

In a preprint study, Stockholm University astrophysicist Beatriz Villarroel and her international team assume extraterrestrials think like humans and would send probes to other planets to research them before sending landing parties. Just as Mars has many probes from Earth in its orbit and other planets have a few, Earth could conceivably be circled by alien probes – possibly too small to see or perhaps disguised. Harvard astronomer Avi Loeb suggests interstellar comet ʻOumuamua could be an alien probe. Those probes, like ours, would eventually stop working and become … junk! The big challenge is looking at the tens of thousands of pieces of space junk orbiting Earth and eliminating anything that’s not alien trash. Sounds impossible? It’s actually easier than you think, and you can be a part of the project.

“We show that even the small pieces of reflective debris in orbit around the Earth can be identified through searches for multiple transients in old photographic plate material exposed before the launch of first human satellite in 1957.”

How simple and elegant! Compare old photographs of the sky with current ones and eliminate the new stuff – with the help of artificial intelligence developed by Villarroel and her team. Wait a minute – wouldn’t all of that stuff be moving across the sky? Good question. The team assumes spacefaring civilizations would think like us and put their probes in geosynchronous earth orbits (GEOs) – like our communications satellites – so they would always remain over the same spot on the surface. In addition, dead probes that disintegrate into debris could stay for millions of years in that same GEO spot.

“At higher or GEO altitudes, the presence of satellites or space debris can be detected by fast, transient glints caused by the reflection of the Sun.” 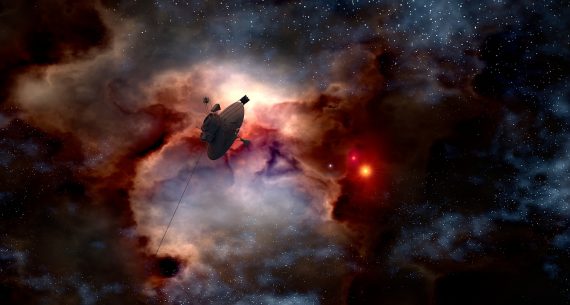 One of those glints just might be alien space junk … and there’s already an operational project whose purpose is to look for fading glints that are signs of vanishing stars. The VASCO citizen science project uses astronomical surveys from the past 70 year. That includes the period before 1959 when Sputnik became the first human-made object in space. Anything with a telltale glint in the sky prior to 1959 just might be alien trash. Villarroel suggests opening the VASCO Project to space trash collectors. The VASCO website gives information on how ‘citizens’ (that’s you) can join the search for transient glints and possibly be the first person to discover a piece of alien trash.

In the meantime, the Transient Glints would be a great name for band.

A Strange Case of a Remote Viewer and Underground Alien Bases