We have long looked out into the sky and wondered what lies out there. It seems that ever since the first flickers of consciousness swirled within our brains we have looked up at the heavens and wondered at what lies out there and what our place is. On our long road to understanding of the universe we live in, there have been many strides and missteps. Science has tried to pave the way forward over the horizon of the unknown, and sometimes it gets it very right, and sometimes it gets things so very, very wrong.  Here we will look at a rather entertaining look at the latter.

Reverend Thomas Dick was born in November of 1774, and was a British church minister, science teacher and writer who had a deep and intense interest in astronomy from a young age. It all began when he saw a meteor streak across the sky when he was 9 years old, and before long he was devising his own telescope fashioned from some modified spectacle lenses and pasteboard tubes. He would pursue this passion into adulthood, and although his career as a preacher derailed a bit when he was excommunicated for having an affair with his servant, he nevertheless still managed to churn out quite a few scientific, philosophical, and religious works that were well received both in England and America and would go on to influence countless scientists, engineers, politicians, writers and thinkers. Yet for all of his respected work, some things really stand out as very odd in this day and age.

Between stints at writing, preaching, and scientific research, Dick became more and more obsessed with the idea that we are not alone in the universe. He was what is called a "natural theologist," meaning that he believed that God’s signs pervaded nature and the cosmos, and that if He had deemed it worthy to create life here, then He had probably done it elsewhere as well. He came to strongly believe in the concept of the plurality of worlds, or cosmic pluralism, that every planet in the Solar System was inhabited and that God would not have created a universe that consisted of merely barren expanses and lifeless rocks. Dick believed that God would want the grandeur of His creation to be witnessed as widely as possible, and so he came to believe that all of the planets of the solar system must therefore be inhabited. He would say of this in his book Celestial Scenery:

This is a conclusion which is not merely probable, but absolutely certain, for the opposite opinion would rob the Deity of the most distinguishing attribute of his nature, by virtually denying him the perfection of infinite wisdom and intelligence. But we have no reason to conclude that they are exactly similar to us. Schemes far more foolish and preposterous than the above have been contrived and acted upon in every age of the world.

The idea of alien life in our solar system in and of itself wasn’t a new idea, and indeed the astronomer William Herschel had been talking about it since way back, but Dick was one of the first to actually try to make a census of just how many aliens there were. He was so sure that the rest of the solar system was inhabited that he went about trying to calculate exactly how many aliens there were populating each planet in our neighborhood, ultimately falling back on the now questionable method of using the surface area of each planet and the population density of England. In those days there were an average of 280 people per square mile in England, so crunching the numbers gave Dick an idea of how many extraterrestrials there were on each celestial object, and his predictions are wild, to say the least. 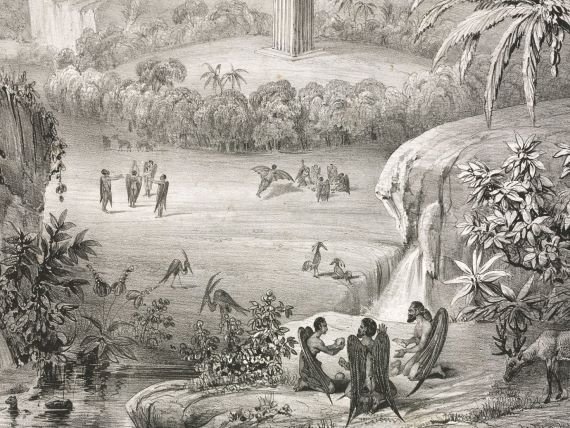 According to Dick, based on his calculations, there were 50 billion creatures living on Venus, seven trillion on Jupiter, 15 billion Martians on Mars, eight trillion living on Saturn, and even 4.2 billion on the moon and the asteroid Vesta holding around 64 million inhabitants according to him. Dick even theorized that Saturn’s rings were inhabited, and surmised that there were no fewer than 22 trillion inhabitants of the solar system, possibly even more if the sun was also inhabited, which he believed it was, even theorizing that it could support an additional 31 times as many creatures. Indeed, Dick believed that although these alien creatures would similar to us in size and habits of living, God had provided each planet with organisms capable of adapting to live in their own respective habitats, even the sun, which was pretty revelatory since this was just before Charles Darwin would come out with his theories on evolution. He would say:

We need not imagine there will be any great difficulty in ascending such lofty eminences; for the inhabitants of such worlds may be furnished with bodies different from those of the human race, and endowed with locomotive powers far superior to ours.

Dick would die in 1857 at the age of 82 without meeting a single one of these 22 trillion galactic neighbors, and to this day we haven’t met any of them either, at least not officially, from our own solar system. It all seems pretty silly to us now, but back in the day Dick was so respected as a scientist that it didn’t all seem totally absurd. Looking back at it all now, it seems to be a rather charming, if misguided foray into gathering an understanding of our solar system, and although we can laugh now, it all goes to show the stumbling blocks we have had when venturing out into the vast unknown above our heads, and how much we don't know even now.

The Committee on Political Assassination (COPA)…and the UFO Phenomenon