Psilocybin “magic” mushrooms are getting all of the love and attention from the medical community these days as more legal studies show the benefits of this psychedelic drug in managed doses for treating PTSD, addictions and other mental afflictions. As it becomes more legal and acceptable, the former ritualistic aspects of obtaining and using psilocybin are diminished – just as the once communal sharing of smoked marijuana is replaced by legal pills, gummies, infused food and other forms that are more often consumed when alone. Consuming psychoactive ayahuasca tea hasn’t yet reached that level yet, and a new study shows it why – placebo studies have demonstrated that participation in the ritual of ayahuasca consumption produces many of the same results. Is this good news or bad for ayahuasca tourism?

“Previous research in naturalistic settings has suggested that ingestion of ayahuasca can improve mental health and well-being; however, these studies were not placebo controlled and did not control for the possibility of expectation bias. This naturalistic observational study was designed to assess whether mental health changes were produced by ayahuasca or by set and setting. Assessments were made pre- and post-ayahuasca sessions in 30 experienced participants of ayahuasca retreats hosted in the Netherlands, Spain, and Germany. Participants consumed ayahuasca (N = 14) or placebo (N = 16).”

The study, led by Malin Uthaug and a team of researchers in the Department of Neuropsychology and Psychopharmacology at Maastricht University in The Netherlands, was published in the journal Psychopharmacology and reviewed recently by PsyPost. Uthang and her team saw that ayahuasca has quickly moved from a spiritual hallucinogenic ritual used by Amazon tribes to a tourist attraction at ayahuasca retreat centers where the beverage of N,N-dimethyltryptamine (DMT) and β-carboline alkaloids is consumed to achieve altered states of consciousness and hallucinations in pseudo-ritualistic settings under the watch of facilitators. Because of the illegality in many countries and the ritual participation, ayahuasca usage has rarely if ever been studied scientifically, especially with a placebo.

To conduct the experiment, the researchers visited six different ayahuasca retreats in the Netherlands, Spain, and Germany. The participants were 12 men and 18 women who had previous experience with ayahuasca and were now in training to become future facilitators. Distribution of the placebos was blind and random. The ceremonies contained the usual music and singing – the only difference was that the participants completed questionnaires before and after the ceremony to measure their empathy, ego dissolution, depression, anxiety, stress, and altered states of consciousness.

The results were surprising.

“Compared to baseline, symptoms reduced in both groups after the ceremony, independent of treatment.”

Uthang and her team found that the ayahuasca ritual with a placebo produced many of the same results as observed in those who consumed the real beverage -- reductions in stress, anxiety, and depression. The only real difference between the two groups was in empathy – those receiving the drug had more empathy after the ceremony. 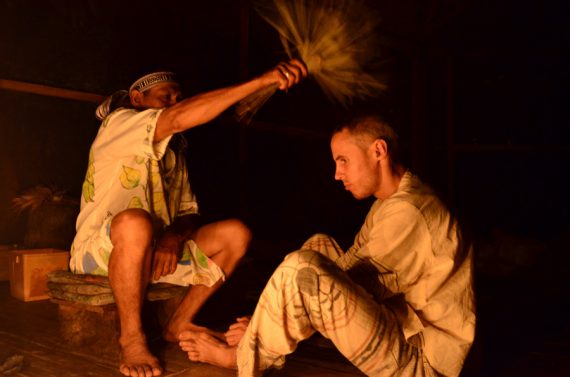 Some caveats -- the participants knew they were part of a study, were already experienced users of ayahuasca and knew what to expect, and the dosages given were lower than those normally used in ceremonies. However, the study concludes that the ayahuasca ceremony and the support of the group and the facilitators offers psychological benefits to the participants independent of the drug.

Will people be interested in non-ayahuasca tours? Can ayahuasca be dispensed in micro doses to offer the benefits of both the ceremony and the drug? Will it ever be legalized? The past pioneers of psychedelics are undoubtedly watching with wonder and frustration.