A picture that appeared to show a ghostly figure was captured at a graveyard in Scotland during a ghost tour on Halloween night. The Edinburgh Walking Tours group was exploring Greyfriars Kirk in Edinburgh when they felt as if something was following them.

In an interview with Edinburgh Live, tour guide Christina Enever explained that there were 38 people on the tour and it was when they walked to the left side of the graveyard at around midnight that strange things began occurring such as hearing strange noises. “I felt really uncomfortable at one point, and even a couple of people on the tour were remarking about weird noises,” she recalled.

At one point, Christina’s son Josh and her brother Kieran went off on their own to snap some photos of the graveyard. “There was already a very strange feeling in the graveyard, and I find there is a very clear difference between the two sides of the Kirk,” Christina explained. “If you go in and turn right I normally find that side a bit lighter but when you go up the left hand side I always feel there is a really dark feeling up there.” “My brother and my son went up and were taking photographs but they said they were hearing things.”

When they were looking through their photographs, that’s when they noticed something strange in one of them. “I saw faces in the pictures. I then went on and showed more people and my mum could see faces in them, and there is one that looks like a full figure,” she stated.

This wasn’t the first time that a ghostly image was captured at the cemetery. In September of last year, it was reported that Lee and Linzi Steer were live streaming their investigation of Greyfriars Kirkyard when they captured numerous unexplained anomalies on their camera. The alleged spirits were captured near the “Covenanters’ Prison”. They even received the words “graveyard” and “burial” during a spirit box session that they believed came from a little girl. Unexplained balls or blue and red lights were also seen hovering around the graveyard. 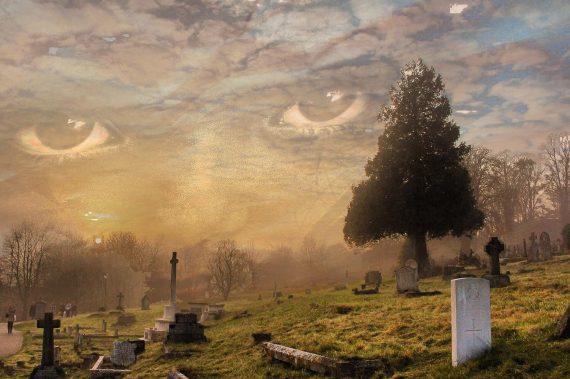 The graveyard has a reputation for dangerous and extreme paranormal activity from more than 3,000 reports that include people being bitten, scratched, burned, and knocked out. The most frightening and active area of the graveyard is where a domed tomb called the Black Mausoleum of Sir George “Bloody” MacKenzie is located. He was a judge in the 1600s who imprisoned 1,200 Covenanters in a field next to the cemetery. While awaiting trial, the prisoners spent four months outside with little food and no shelter. Several of them died from being mistreated before their trial dates and the majority of those who survived ended up being executed.

With all of that paranormal activity, perhaps the photo taken during the ghost tour on Halloween night did capture a spirit. But you can decide for yourself as the photo can be viewed here.