Humans Could Definitely Live on Dune’s Arrakis — But Would They Want To?

“Arrakis ... Dune ... wasteland of the Empire, and the most valuable planet in the universe. Because it is here—and only here—where spice is found. The spice. Without it there is no commerce in the Empire, there is no civilization. Arrakis ... Dune ... home of the spice, greatest of treasure in the universe. And he who controls it, controls our destiny.
— Princess Irulan, Frank Herbert's Dune (2000)”

“Dune” is the hottest movie these days and the best cinematic interpretation ever of Frank Herbert’s classic sci-fi novel, so there’s probably no time in history when more people were familiar with Arrakis – the planet at the center of the story. While we know it’s the home of the spice – melange – and the Fremen manage to put up with the desolate climate in order to harvest it, could actual humans survive there? A group of climate scientists decided to find out using a climate model they normally feed data on Earth. Fortunately, Alex Farnsworth, Senior Research Associate in Meteorology at the University of Bristol, Michael Farnsworth, Research Lead Future Electrical Machines Manufacturing Hub at the University of Sheffield, and
Sebastian Steinig, Research Associate in Paleoclimate Modelling at the University of Bristol, didn’t have to fight sandworms to get the data – as they explain in The Conversation, it was available to them in the Dune Encyclopedia. 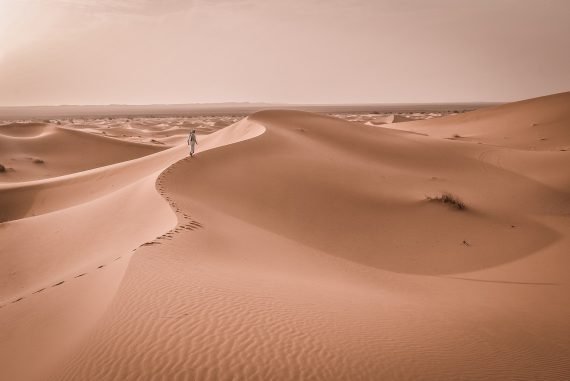 Compiled and edited by Dr. Willis E. McNelly, a friend of Frank Herbert, in 1984 with 43 other contributors, the Dune Encyclopedia is a dense factual compendium based on the first 4 books of the original Dune saga -- Dune, Dune Messiah, Children of Dune, and God Emperor of Dune. While using the same fundamental physical laws that govern weather and climate here on Earth, the researchers fed the climate model Arrakis’ topography, circular orbit and atmosphere – it is similar to Earth’s but with less carbon dioxide but a much higher ozone concentration. That ozone should make Arrakis the rain-free desert we see in the movie. Did it?

“However, our model does suggest that very small amounts of rainfall would occur, confined to just the higher latitudes in the summer and autumn, and only on mountains and plateaus. There would be some clouds in the tropics as well as polar latitudes, varying from season to season.”

The elaborate interactive model is available on the team’s Climate Archive website. The researchers were surprised to find their computer image differed from the Arrakis of the book and movie. Besides having more rainfall than expected, instead of being cooler and more hospitable in the polar regions the model showed the opposite. Unlike Earth where the equator and the poles have the extreme temperatures, the Arrakis model shows the mid-latitudes and the poles getting unbearably hot and unbearably cold. The heat at the poles is probably due to the polar regions of Arrakis having significantly more atmospheric moisture and a high cloud cover which acts to warm the climate.

So, could real humans survive on Arrakis? According to the model – yes … provided they ignore the book and follow the model’s recommendations to live in the tropics where the temperatures are hospitable and avoid the mid-latitudes, particularly the lowlands where the monthly average temperatures are often above 50-60°C (122-140° F). A safer alternative would be to don “stillsuits” that keep the wearer cool and reclaim body moisture from sweating, urination and breathing to provide potable drinkable water. Good luck finding those on Earth – not even the ISS has reliable suits like this for spacewalks.

Would these harsh conditions keep humans away from Arrakis? The answer is one word: spice.

The Puzzling Sea Vanishing of the Movie Star Marie Empress