Man Claims to Photograph Dogman During Encounters in the Australian Bush

Mention to someone in Australia that you saw a ‘dogman’ and they’ll think you were on a construction site – down under a dogman is an assistant to a crane operator, responsible for securing the crane's load and directing the operator. That may be why an Australian man had a hard time getting anyone in his country to believe the ‘dogman’ he saw was a half-man, half-dog creature that he encountered in the bush … twice! He even has a photograph to prove it. Fortunately, there are plenty of media sites in the U.K. and the U.S. who picked up on it. What did this man see that he claims terrified him for month?

"So whatever it was, this thing was following me, it wasn’t a coincidence or anything. It was more of a stalk."

The ‘dogman’ or ‘Dog Man’ story appears to have originated on the Believe: Paranormal & UFO Podcast, a “weekly Science, Natural Sciences and Society podcast” hosted by Kade Moir, and was then picked up by The Sun and other media sites. The witness, identified only as ‘John’, claims he was kayaking and fishing last Boxing Day (Dec. 26, 2020) when he heard what sounded like footsteps that matched the rhythm of his splashing paddle … and stopped when he did. That convinced him he was being followed, but he was quick-witted enough to locate where the sound was coming from and take a picture before rapidly paddling away. (Original photo and magnified photo here and  photos with 'dogman' circled here.) While he claims he was “petrified for a month” after that, he decided to go back and look for the ‘dogman’ … was it because no one believed him or his hard-to-see-it photo?

“As it was running, it was smashing trees out of the way. I don’t know if they were breaking or it was hitting them, you couldn’t see what the bush was like because it was so thick.”

Now one would think that if you got a picture the first time, you’d be ready the next time … but unfortunately it looks like ‘John’ wasn’t. That’s too bad because not only did he miss out on a video of the ‘dogman’ crashing through the bush, he also missed recording ten minutes of roaring.

“I’d never heard anything like it in my life. It would roar, and then it would take a breath in, but then the breath it was taking was actually louder than the roar it was doing. This creature just went to another level and it was crazy. I could hear in my head something saying, ‘go now or you’ll die’. It wasn’t my own voice, my own consciousness, it was something else. That 10 minutes was probably the longest in my whole life, I thought I was going to be killed. I had no weapons, didn’t even have my fishing knife, no phone service.” 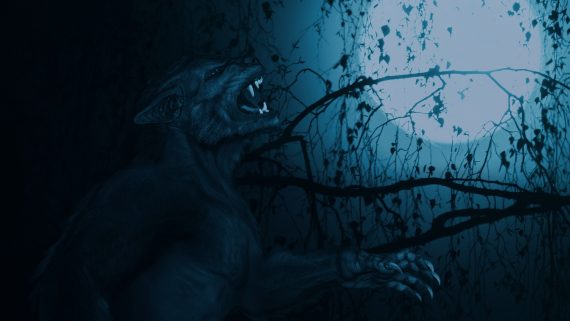 ‘John’ claimed he’s come forward to make sure no one gets hurt … but if that’s his concern, why didn’t he go to an Australian media site or the local police or wildlife officials with his stories and photo?

The U.S. dogman is most often reported in Wisconsin and Michigan, but tales of half-man, half-dog have been reported in other U.S. states and other countries … although not Australia. The descriptions often sound like a werewolf or occasionally a Bigfoot, but the howling that ‘John’ said he heard seems to be uniquely dogman. The ‘crashing through the trees’ sounds more like a Yowie, Australia’s Bigfoot-like humanoid cryptid. Whatever the case, all we really have to go on is the hard-to-see photo and the testimony of ‘John’, Again, it would have been helpful if he had recorded the second encounter, especially the howl, but if this was a real encounter it’s understandable he might have panicked.

Boxing Day is coming soon. Anybody up for kayaking in the bush?

“Extremely Unusual” Discovery of a New Toothless Dinosaur in Brazil