In 1982, the world was introduced to the term “extraterrestrial” and the idea that a being from another planet could send a signal to its home in order to summon a ride back. That signal in “E.T. the Extra-Terrestrial” was sent from a modified electronic toy, which means it could have been detected by terrestrial communications detectors … if they had been looking for it. Despite that huge (and heartwarming) hint, the search for extraterrestrial intelligence (SETI) has been focused on detecting signals coming ‘to’ Earth under the assumption that unlike in the movies, E.T.s aren’t here yet. Two scientists want to change that assumption and search for strange signals being sent ‘from’ Earth … and they developed a plan and a star system to do it with.

“Under the hypothesis that our Galaxy has been fully explored by self-reproducing probes forming an efficient communication network at the galactic scale by direct links between neighboring systems, using the systems' host stars as Gravitational Lenses (GL), we identify Wolf 359, the third nearest stellar system, as the best target for a search for interstellar communication from the hypothesized alien probes.”

Michaël Gillon, professor of astrophysics at Belgium’s University of Liege, and Artem Burdanov, from the Department of Earth, Atmosphere, and Planetary Sciences (EAPS) at MIT, made a number of assumptions beyond the main one that E.T.s are already here. They assumed an intelligent civilization would send self-replicating (von Neumann-style) probes for efficiency. They assumed the civilization is on a planet in the Milky Way and would have distributed non-armed probes throughout the galaxy to build an exploration and communications network. Finally, they figured the E.T.s would know about gravitational lensing as we do and use it to bend optical communication beams around stars to their home system.

Using those assumptions, Gillon and Burdanov then looked for a nearby star that could support exoplanetary life and in the right position in relation to Earth to facilitate communications. They chose Wolf 359 -- the third closest star system to Earth, a red dwarf similar to Proxima b (the closest system) and likely but not yet confirmed to have exoplanets. Most importantly, it was in the right place for an annual communications event on a solar gravitational line (SGL) with Wolf 359.

“Due to this particular position, the Earth should lie once per year in the communication beam of at the putative solar probe emitting towards Wolf 359. I made some computations that made me conclude that if the probe emits to Wolf 359 in the optical range when the Earth is in its beam, we should be able to detect its emission even with a modest-size telescope.”

While E.T. used an electronic toy in the movie, Gillon and Burdanov had access to the TRAnsiting Planets and PlanetesImals Small Telescope – South (TRAPPIST-South) and the Search for habitable Planets EClipsing ULtra-cOOl Stars-South (SPECULOUS-South) telescopes at the right time of the year to see these optical transmissions. 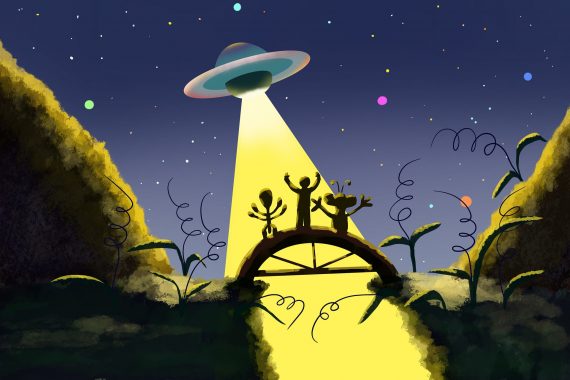 “While considering this null result, I realized that the emitting probes could be “off-axis” and much closer to Earth than the SGL, and that they could maybe be detected directly in imagery.”

“Null” means no, but this was just the first test – the results are available in a preprint paper. Gillon told Universe Today he and Burdanov will be observing the 10-20 nearest stars with their telescopes to detect outgoing signals from alien probes in our solar system.

Would E.T. be impressed … or pointing them to a Speak & Spell?

When the Human Race Isn’t Quite Human Anymore…