Ancient fossils unearthed by scientists in Missouri belonged to a new type of duck-billed dinosaur. It was paleontologist Guy Darrough who made the discovery of a juvenile Parrosaurus Missouriensis that grew to between 25 and 30 feet in length (8 to 9 meters).

What’s even more amazing than finding a totally new species is that after the discovery of the juvenile dinosaur, the team continued digging and unearthed an adult Parrosaurus Missouriensis next to it. Darrough described the discovery by stating, “I can’t imagine anything more remarkable than what we’ve discovered here” and that it is “a world-famous discovery”.

After he made the discovery of the juvenile dinosaur, Darrough had it brought to the Sainte Genevieve Museum Learning Center who stated that they are “thrilled”. Darrough then contacted Chicago’s Field Museum. “I eventually talked to Pete Makovicky, curator of dinosaurs at the Field Museum,” he told the St. Louis news station KTVI, adding, “He came down and looked and said, ‘Yeah, you guys got dinosaurs.’”

In a statement provided to Newsweek, Abigail Kern, who is the learning center's office manager, said, “While the adult specimen is being transported to the Field Museum in Chicago, the juvenile skeleton will be on display within the laboratory of the Sainte Genevieve Museum Learning Center.” “We currently have the fossil displayed in the plaster jacket. Starting on the date of our Grand Opening, December 11, we will have paleontologists and preparers actively working on the fossil within the lab, which is viewable in our museum.”

“This is in fact a remarkable site in one of the best dinosaur locals east of the Great Plains,” noted Makovicky who is a professor in earth and environmental sciences at the University of Minnesota. He went on to say that it’s very possible that other dinosaurs will be discovered in that area. Unfortunately, they’re not saying where this site is located until excavations are completed. 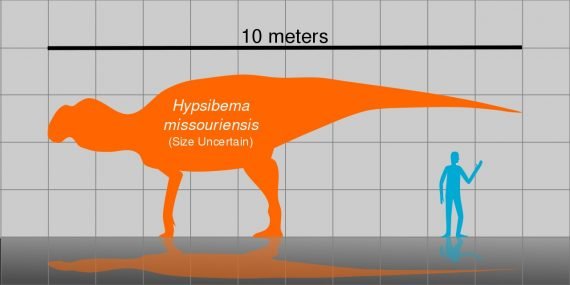 Interestingly, dinosaur bones were found on the property by the original owners back in the 1940s and were brought to the Smithsonian but that was the end of the story until the 1970s when the land was sold and experts have been digging there ever since.

In addition to the new species, a tooth belonging to a Tyrannosaurus had also been found and they are “hoping there’s a whole bunch” more ancient fossils just waiting to be found.

A news report about the discovery can be viewed here.