Sinister Things That Can Happen When You’re Writing a Book: Paranormal Activity?

For me, it’s always a good day when I put the finishing touches to a manuscript. And, June 16, 2015 was the date on which I completed the writing of my book, Men in Black: Personal Stories and Eerie Encounters. Of course, the manuscript still had to go through the editing and proof-reading stages. And I had to dig out a bunch of photos to go with the book, too. But, there’s a good feeling of satisfaction, while sitting at one’s desk, knowing that the bulk of the work – in terms of the content of the book – is done. Plus, it was a hot and sunny day, the birds were singing in the trees outside my apartment, and that night I was due to see a Mötley Crüe tribute band play in a local beer and junk-food dive. It was all good! Except, that is, for one thing which occurred around 9:45 a.m. That was roughly the time when I made the final change to the manuscript, hit "save," and closed the document. I was ready to email it to Lisa Hagan - my literary agent - for review.

Only seconds after I closed the document, I heard a sudden bang coming from one of the rooms in my apartment. I frowned, stood up, and probably said something to myself along the lines of "WTF?" And, since my apartment home is a relatively compact one, it didn’t take long at all for me to find the cause of that bang; seconds, in fact. On walking into my bedroom, I saw that one of the many pictures I have on my walls had fallen to the floor. Despite the floor being carpeted, the black picture frame was broken and the glass had shattered, with pieces and shards all over the carpet. Dammit. Time to get out the vacuum-cleaner. What was particularly eye-opening, however, was the specific item which had fallen from the wall. 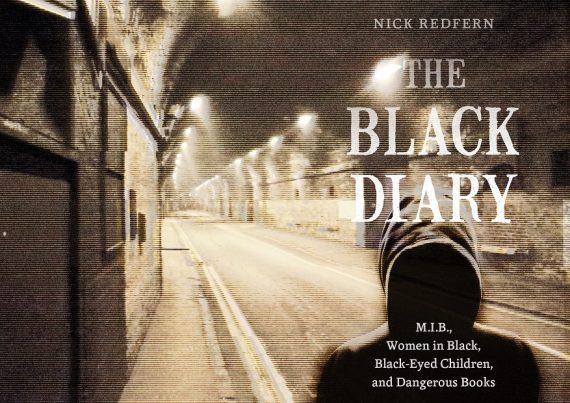 It was a framed letter written back in 1953 by none other than Albert Bender. He was the man who, arguably, birthed the mystery of the Men in Black. It was all as a result of his early-1950s-era traumatic experiences with a trio of glowing-eyed, vampire-like MIB in his hometown of Bridgeport, Connecticut. The strange tale was chronicled in Bender’s 1962 book, Flying Saucers and the Three Men. It wasn’t long after that initial encounter in the fifties that Bender, who had got into UFOs in the late-1940s, and who created the International Flying Saucer Bureau, couldn’t take anymore mayhem and menace in his life and quit Ufology for good. He did not look back. Well, maybe a glance or two, but certainly not much more. 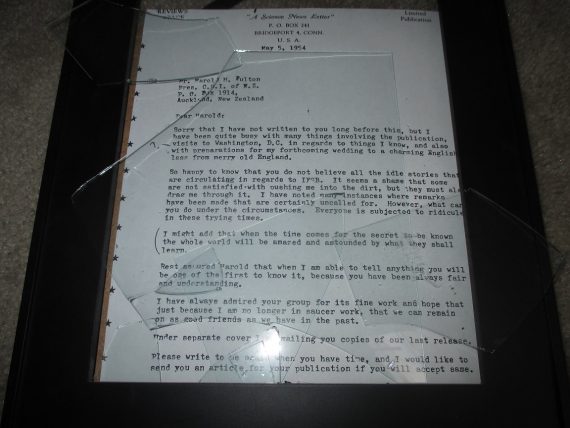 At the time the frame hit the floor, the maintenance guys at the apartments were working outside, hammering away at something. So, yeah, we could make a case that the vibrations from their tools dislodged the picture and – hey, presto - I’m left with a broken frame and glass everywhere. Maybe that’s all it was. On the other hand, though, it’s worth noting that the wall in question has around fifteen or twenty small framed images hanging from it. Of all the ones that could have fallen (and which range from images of Bigfoot to the Loch Ness Monster, and from the Chupacabra to 1950s über-babe Betty Paige, and much more), it was one with a direct connection to the Men in Black. And, I could hardly fail to note that it fell at the same time I not only closed the Word document, but when I had just completed the Men in Black book, too. I got a distinct and sudden feeling that invisible, manipulative entities were watching – and coldly basking in – my every move.

When I told a few people about this, they all said that, in essence, it was a sign. But, a sign of what, exactly, was the important thing that no-one could fully agree upon. There were those who viewed it as a warning to me to stay away from the matter of the MIB. Others suggested I was under some kind of dark, demonic attack. My view? It was just another day of high-strangeness; I shrugged and made a plate of toast and jelly. There was, however, one thing I knew for sure: based on what had occurred over the course of the last year, it was likely to be just the start of yet another bout of paranormal madness and mystery. And, sure enough, it was that.  And more. As always, though, I don’t ever let such issues affect my life: the Mötley Crüe tribute gig went ahead without a hitch. The band was pretty lousy though.