The Disappearance of the USS Cyclops: The Fate of this Navy Ship Remains a Maritime Mystery

Clocking in at almost 550 feet in length, the USS Cyclops was one of the largest ships in U.S. Navy’s arsenal in March 1918, when the ship set sail from the West Indies. Carrying more than 300 crew members and a cargo of close to 11,000 tons of manganese, the Cyclops was bound for Baltimore when it seemingly vanished from the face of the Earth.

The Cyclops and her crew were no strangers to the sea. Having been in frequent operation since 1910, the massive Navy transport ship was a regular visitor to as far south as Mexico and the Caribbean, frequently being deployed in the transportation of coal to various locations around the world. However, as the guns of war began sounding in 1917, the ship’s cargo capacity made it an asset to the U.S. Navy, who began to employ it to aid with providing much-needed coal to help power ships during the war effort.

“Weather Fair, All Well,” had been the last message the ship sent as it departed from Brazil en route first to Barbados, where it would stock up before continuing its trek northward to Baltimore. Over the course of the next nine days, the Cyclops and her crew expected an uneventful passage through Atlantic waters.

Yet at some point along the way, something went terribly awry… so much so that whatever events led to the ship’s disappearance, it happened so quickly that there had been no time to send a distress signal or any other indication of what might have gone wrong.

“Usually a wooden bucket or a cork life preserver identified as belonging to a lost ship is picked up after a wreck, read a report on the incident in Santa Fe Magazine shortly after the vessel inexplicably vanished, “but not so with the Cyclops.” 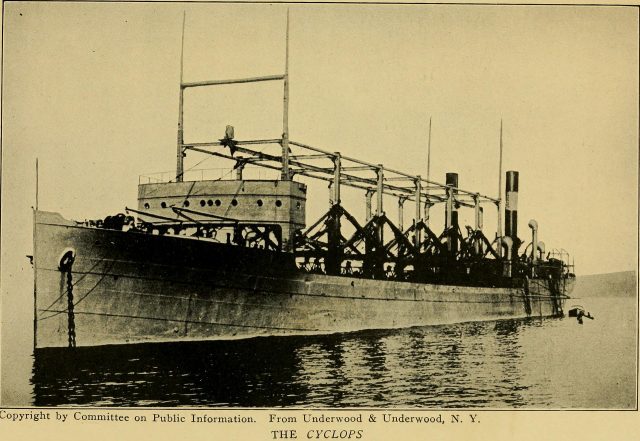 The mystery of her disappearance remains unsolved more than a century later. So what could have happened to the Cyclops during her fateful voyage to Baltimore in 1918?

As historical researchers and amateur sleuths probed the mystery during the ensuing decades, the irresistible draw of the Bermuda Triangle—perhaps not as a vortex for lost ships so much as a convenient device for supernaturalists seeking an otherworldly explanation—eventually dropped anchor. It was true, after all, that Cyclops had been sailing through the area at the time it presumably vanished.

Seemingly more plausible theories about the ship’s fate included the idea that being a supply ship with a load of magnesium would have made it a likely target for a raid by German submarines that might have been operating in the region.

As time has drawn on, some have looked beyond the horizon toward other possibilities. Instead of enemy action—a theory for which there is as little evidence as there is for whereabouts of the Cyclops itself—some researchers have proposed that the ship’s captain at the time, George Worley, might have been at fault for the disappearance. Theories involving everything from Worley’s fondness for strong drinks, to accounts of mutiny aboard the ship, led to investigations by the Navy in the months ahead of the ship’s disappearance. However, the Navy apparently cleared Worley of the charges and found no reason to suspect him unsuitable for captaining a ship.

Despite their clearing of Worley’s name, they found the circumstances surrounding the disappearance of the Cyclops no less troubling, with Navy issuing an official statement that called it “one of the most baffling mysteries in the annals of the Navy,” adding that “all attempts to locate her having proved unsuccessful.” 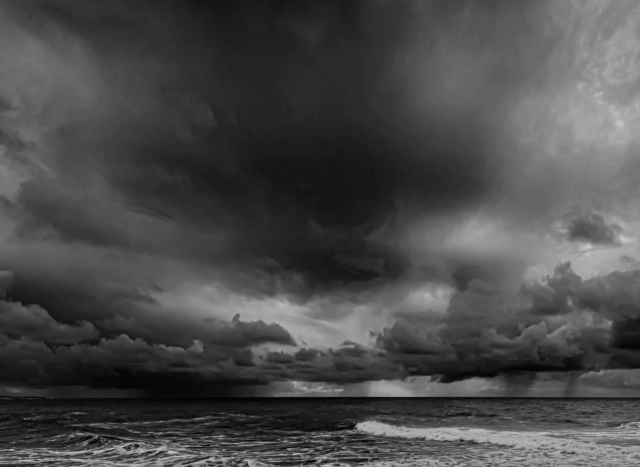 A theory proposed by Marvin Barrash, himself a descendant of one of the men who presumably went down with the ship, believes it might have been a perfect storm that caused the disappearance; not an actual weather event, that is, but a combination of the heavy magnesium loading down the ship, paired with mechanical failures that would have likely brought her down. As the Cyclops sailed within the vicinity of the Puerto Rico Trench, it would likely have been capable of sinking to irretrievable depths, where it likely remains hidden today.

Although theories of a German raid cannot be entirely ruled out, other theories have been proposed, like that of the Naval History and Heritage Command who say that the ship had likely “sank in an unexpected storm.” Whatever circumstances might have led to the ship’s to its mysterious fate, the disappearance of the vessel along with its 306 crew members and passengers leaves it to history as the largest loss of life in U.S. Naval history that can be attributed to a single event, and one of the greatest unsolved maritime mysteries of the last century.