Mysterious lost treasures have always captured the imagination. The thoughts of riches beyond out wildest dreams just lying out there lost and forgotten and for the taking has long been a potent and alluring drug to many. In most cases these hidden stashes of loot have colorful and intriguing histories entwined about them. One such case comes to us from the 1920s and 30s, back in a time of gangsters, mobs, and Prohibition, when violence ruled the streets. Here we have a notorious gangster who rose up from the gutter to make a name for himself and launch into the stratosphere of criminal legends, only to fall back down and leave the legend of a mysterious treasure behind that has never been solved.

Born Arthur Flegenheimer to German-Jewish parents in 1902 in the Bronx, New York City, the man who would go on to be known as Dutch Schultz had a rough childhood, his father abandoning him when he was just a child, something he never really got over. To help support his single mother, he dropped out of school in the eighth grade, and although he started out doing legitimate odd jobs, it was not long before he was lured into the world of crime. He started out small, robbing craps games, before graduating to burglary and being arrested and imprisoned for a stint at the age of 18. It did not do much to stop him, as although he tried to go legit working at a trucking company, it would not be long before a life of crime was calling out to him once again.

When Prohibition went into effect in 1920, Schultz’s trucking company began bootlegging liquor and did not take him long at all to realize the potential money to be made there. He branched out to the company’s Italian competitors to work for them illegally manufacturing and distributing bootleg liquor, and through a campaign of violence and ruthlessness he gained a stranglehold on the bootleg liquor business in the Bronx, eventually forging his own bootlegging empire across the city and eventually the entire state and beyond. It was at about this time that he changed his name to "Dutch Schultz," because it sounded more badass than Arthur Flegenheimer. Schultz, basically strong-arming speakeasies into buying from him, became especially known for his extremely violent methods to get what he wanted, including torture and numerous murders, with an estimated 136 people killed under his watch during his career. Greatly feared as a vicious criminal mastermind, he would branch out to other organized crime-related activities, including racketeering, narcotics, extortion, and illegal lotteries all over New York state and parts of New Jersey. He was soon making over $20 million a year off of his crime empire, considered one of the richest gangsters of the era, and was feared and respected even by other mobsters, all by the time he was just 25 years old. Yet for every stratospheric rise, there is often an equally plummeting fall, and dark days were ahead for Dutch Shultz.

It was only a matter of time before Shultz became a target for the authorities and was well on their radar. Known as one of the most dangerous gangsters in the United States, he was considered a pretty big fish, and the FBI began pursuing him relentlessly. Like with many other mobsters, including Al Capone and “Lucky” Luciano, the feds took the route of going after him through charges of tax evasion, setting New York’s Federal Prosecutor, Thomas E. Dewey, loose on him. Schultz knew he was in trouble, potentially facing a long prison sentence, and with the law closing in he took measures to protect his money. He allegedly gathered up an associate by the name of “Lulu” Rosencrantz to gather together all of his cash, gold, World War I Liberty Bonds, and gems, stuffed it all into a specially designed airtight and waterproof safe, and travelled to Phoenicia, in upstate New York, to stash it all at a secret hiding place near a place called Esopus Creek, supposedly even carving an “X” into a nearby tree like it was some sort of buried pirate’s treasure.

When this was done, Shultz turned himself in to investigators, knowing his time was up after an unsuccessful bid to elude them, and ended up going through two trials on charges for tax evasion before being acquitted for lack of evidence. In the meantime, other mobsters had been moving in on his turf, namely Lucky Luciano, so rather than lay low for a while he instead went on a bloody rampage to claw back his territory, operating out of a speakeasy he owned in Newark, New Jersey, called The Palace Chop House and killing with impunity. On top of this, he started going to mob syndicate bosses asking for permission to carry out a hit on the federal prosecutor Dewey, which was refused. All of this was making the top bosses very worried. They were dealing with a loose cannon, Shultz was killing off rivals without going through the proper channels, which was causing problems with rival mobs, as well as drawing unwanted attention from the authorities, and when he attempted to kill Dewey even after being denied permission, it was all too much. The bosses decided that he was too unstable and creating too much heat, and so decided to have him taken out of the equation. On Oct. 23, 1935, Dewey was relaxing at his establishment when he took a trip to the restroom, where two mob hitman riddled him and his bodyguard, "Lulu" Rosencrantz with bullets. 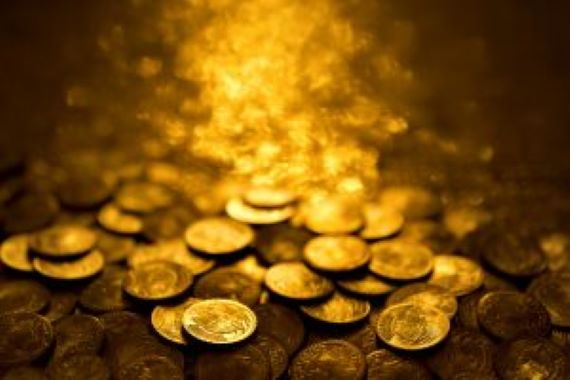 Unbelievably, although he was egregiously injured, Schultz survived this assault, and it was at the hospital where he would start to ramble about his secret hidden treasure. As he lay there on his deathbed, he confessed that he had hidden away what he claimed was $7 million, although he made no mention of the precise location. He also mentioned his "collection of papers," as well as spew a good amount of mostly incoherent, cryptic rambling, saying such odd things as "Get you onions up, and we will throw up the truce flag" and "No payrolls. No walls. No coupons,” “A boy has never wept...nor dashed a thousand kin,” “Oh, Oh, dog Biscuit, and when he is happy he doesn't get snappy, and “French-Canadian bean soup.” This was somewhat understandable because at the time he was hopped up on morphine and getting weaker and more delirious and less lucid by the minute, devolving into a nonsensical stream-of-consciousness babble before dying of peritonitis on October 24, 1935, without ever disclosing where all of the loot was hidden and taking any secrets he had to the grave.

After his death, there was no one left who had actually seen the location, as the one who had been with Schultz when it was hidden was also dead, killed in the hit. It was rumored that before being gunned down, "Lulu" had not only told a friend named Marty Krompier the location of the treasure, but had even drawn a map to it, but Krompier was allegedly also gunned down at a barber shop in New York City and the map stolen. Although he survived the attempt on his life, he claimed that it was impossible to find the treasure without the map. To this day the map has never been found and it is unknown what happened to it. The supposed treasure, estimated to be worth anywhere from $50 million to $150 million in today’s dollars, has never been found, and has sparked numerous hunts for it. People have dedicated their entire lives to finding to Shultz’s mysterious treasure, to the point that it has become legendary among treasure hunters.

The mystery of Shultz’s treasure has not been solved to this day, despite many searches for it, and indeed it is not known whether it ever existed at all. We don't know if the whole story is true, although Schultz certainly had a load on assets lying around and no one has seen a dime of any of it. It certainly seems plausible that he took it all and sequestered it away, but where? The only people who might know the answer to that question are Schultz, the one who helped him bury it, and perhaps whoever allegedly stole the map to it, but since they are all dead, there is no way we will ever know for sure until someone stumbles across it.

From Flying Saucers to JFK: Strange, Controversial and Absolutely Weird…