The Roswell Incident: Do Any of the Explanations Really Give Us the Full Story?

It is arguably the most talked-about UFO event in history, and undeniably the most famous involving a purported UFO crash: what happened at Roswell, New Mexico, in 1947?

It would be hard to say just how many researchers have weighed in on the case over the years, although a handful rose to prominence for their investigations of it. The time and effort put toward the case are easy to understand, since, at one time, it appeared to be what UFO researchers had long been waiting for.

The “smoking gun,” as it were.

Today, the famous Roswell incident of 1947 appears to have lost at least some of its luster, even for those who once championed it. One doesn’t have to even accept the official explanation offered by the United States Air Force in a pair of reports it published in the 1990s—that the incident stemmed from an incident involving the crash of a once top-secret Project Mogul balloon—to acknowledge another reality about Roswell: that championing this case alone won’t be enough end the culture of dismissals and denials about the topic that have prevailed in government for so many decades.

However, today with new efforts underway that could result in the establishment of an office of unidentified aerial phenomena investigations within government (its name, as outlined in a recently proposed amendment to the Defense Authorization Act for Fiscal Year 2022, will likely be the “Anomaly Surveillance and Resolution Office”), some have begun to wonder if the final word on Roswell might not change again. This, especially if the government’s renewed efforts to resolve issues about the phenomenon revisit historical cases from decades ago and provide any further details about such cases to the public. 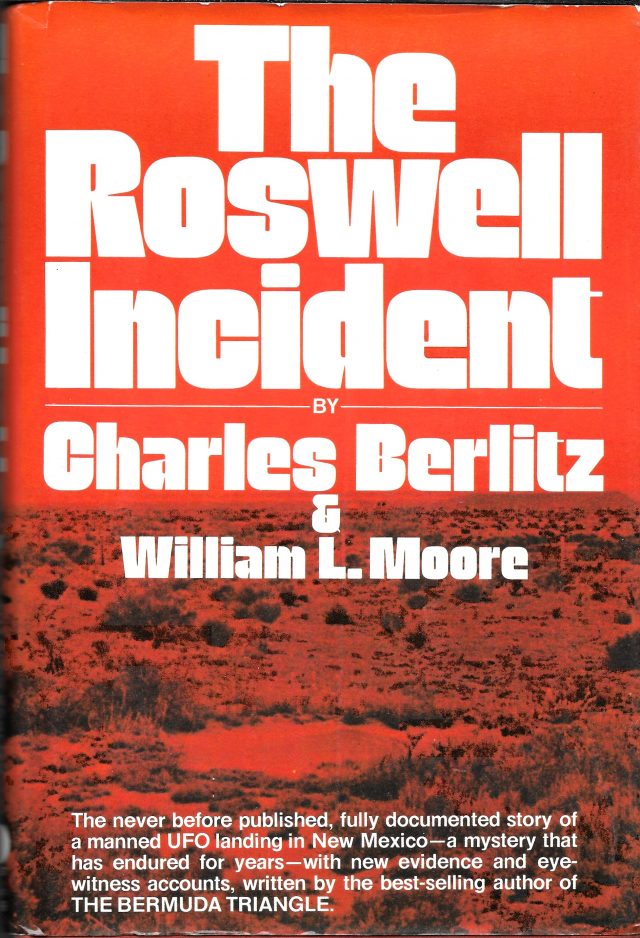 Roswell naturally comes to mind here, since it is the case that captured the mind of the public and, especially, those of UFO enthusiasts, following the earliest reinvestigations of the case beginning in the 1970s. Researchers William Moore and Charles Berlitz published the first book to look into the matter, drawing in part from investigations conducted by Stanton Friedman, who would go on to author books of his own on the topic, in addition to becoming a central media personality regarding the case. Researchers Kevin Randle and Don Schmitt would thereafter go in search of additional witnesses, further working to flesh out the sequence of events. It was admirable, and very time-consuming work, and eventually, it was hoped that enough witness testimony would pay off.

Yet for many years, skeptics have been willing to brush aside the witness testimony. This especially became true after the USAF released its reports in the 1990s, which seemed to leave no further doubts about what had actually crashed at Roswell. Yes, something certainly did crash at Roswell, and yes, the USAF was involved in a coverup. The reason, they said, did not have to do with alien bodies, however, and instead dealt with a highly sensitive project that, should information about it become available to the public, could have gravely impacted national security.

This official scenario does still explain at least some of the eyewitness testimony from those who claimed they had observed wreckage, and might even have received threats from members of the military who were busily trying to hide what had actually happened. On account of this fact, for a time I had personally been more willing to accept the determinations offered in the pair of reports published by the USAF in the 1990s. Maybe the incident really wasn’t all that it had been made out to be; if anything, maybe the widespread belief in the crash of an alien vehicle—not a spy balloon—actually would have aided the coverup, and thereby might have been encouraged at times by the USAF.

However, there are still a number of problems with the “official” USAF explanation(s) that must be acknowledged, too. The most obvious one is the fact that a coverup actually did occur, and because of this, the explanations for what happened at Roswell have continually changed over the years. First, it was announced that one of the mysterious “flying discs” had indeed been captured, only to be changed to a “weather balloon” the following day. The explanation changed again once the USAF acknowledged the Mogul scenario decades later. By this time, it was already evident that the government’s position had changed more than once, so what was to keep the newest explanation from being anything different? If they lied to cover up the truth, what would prevent them from doing it again, if Roswell actually did represent something more than a top-secret Cold War-era surveillance balloon?

Perhaps the most troubling issue with the Roswell story has to do with the witnesses. Although attempts have been made over the years to reconcile the stories about alien wreckage, and even alien bodies purportedly found at the site of the alleged crash, it becomes hard to understand how all of the testimony from these individuals could be entirely wrong. This had especially been the case with mortician Glenn Dennis, who provided lengthy testimony about receiving a call inquiring about small caskets that could be “hermetically sealed,” and thereafter meeting a nurse at the nearby Roswell Army Air Field hospital who had been badly shocked after seeing alien bodies. This, after having had his own run-in with officials at the base, who had threatened that his bones would be picked clean if he talked about what he saw there that day, and that he would make good “dog food.”

Dennis was only one of the individuals who claimed to have seen alien bodies, of course, or at least have knowledge of them. Some accounts even tell that Chaves County Sherriff George Wilcox had learned about the crash prior to rancher Mac Brazel, who discovered the wreckage on his ranch, appearing in town and discussing it. Wilcox’s wife, Inez, later told her granddaughter Barbara Dugger that Wilcox and his deputies had been aware of the crash site location, and that bodies had been found, although she was unsure if Wilcox himself had seen the bodies.

Much like the changing stories about what, precisely, occurred at Roswell in the first place, attempting to reconcile the claims about “alien bodies” has resulted in a variety of different explanations provided by the USAF. Among these include observations of crash test dummies, an injured parachutist whose appearance might have included swelling that resembled the large eyes of purported alien occupants, and even the charred remains of the crew aboard a crashed aircraft (involving an incident which didn't occur until the following decade). According to the USAF reports published in the 1990s, these separate events were “consolidated” by the witnesses over the years, and misremembered as all having been centered on the incident at Roswell in the summer of 1947.

Of course, each of these various narratives may individually be true. However, the notion that a combination of separate incidents like this could really have been so confusingly misremembered as being part of a single incident--and one involving something so specific as the discovery of exotic aircraft wreckage, and the remains of its occupants--seems dubious. While many accept the USAF explanations at face value (as even I at one time had been more willing to do), it would be fair to say that there are still more than a few problems with the various scenarios that they have attempted to jumble together as a solution for what many witnesses all claimed had been a single event in 1947.

In conclusion, while there is always the possibility that it was not what many popular books, films, and television shows have made it out to be, there does seem to be something deeper to the Roswell mystery that remains wanting of a complete, and more logically consistent resolution than what the public has already been given. Such questions have caused me to step back on several occasions, and attempt to reevaluate and make sense of both the “official” claims, as well as those who maintain the popular version of the story: that the Roswell incident involved a crashed UFO.

It does not, therefore, seem unreasonable to question whether any of the numerous explanations actually solve the mystery of what happened in the New Mexico desert back in 1947. If anything, the official narratives provided by the USAF may really only add mud to the already murky water surrounding one of the most perplexing American mysteries to have occurred since the end of the Second World War.

Exceptionally Hot Planet Larger Than Jupiter Has Been Discovered