At first glance there doesn’t seem to be anything all that remarkable about the town of Carman, in the Pembina Valley Region of southern Manitoba, Canada. The small agricultural town of around 3,000 is mostly rural, a quiet and serene place surround by a rich prairie agricultural belt as far as the eye can see, where not much ever really happens. It is the sort of place one could drive right on by without paying much attention to it. Yet in the years of 1975 and 1976, this rural hamlet of farms would become the center of one of the strangest and well-witnessed UFO sighting flaps in Canadian history, when the area would be visited by a persistent, mischievous, almost playful UFO that would affectionately come to be known as "Charlie Red Star."

It seems to be unclear just when exactly the wave of sightings and the overall phenomena started, but it is most often said to have begun in February of 1975, when a farmer was going about his daily chores near his barn when he saw a “red light that looked like a ball” and measuring 14 to 18 inches in diameter swoop down to buzz right over his head. It would apparently emit a searing heat and disorient the farmer for the duration of its appearance, before shooting off into the night. After this, a strange red light or fireball would frequently be seen hovering and bobbing about the area, and the sightings would start to come in at a good clip, sometimes reporting a smallish orb of light that seemed to dart towards people and dart away as if playing, while other reports seem to describe objects more akin to a traditional UFO or “flying saucer,” sometimes even making mention of a larger object with the orbs dancing about it, and some of the reports particularly stand out. 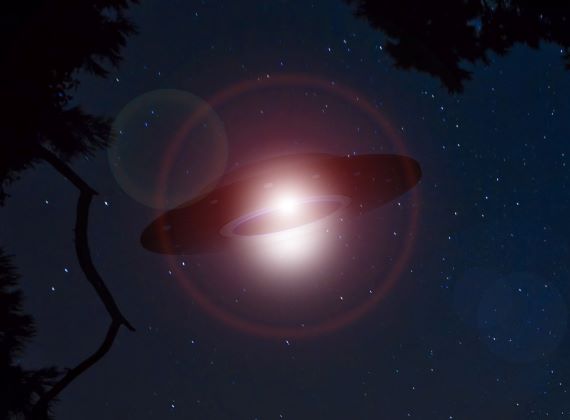 One of these occurred on March 27, 1975, when a young girl was woken in the middle of the night by a piercing screaming noise outside that sounded sort of like a siren. As she sat there in her bed, she claimed that the whole house began to shudder as if an earthquake was happening and she rushed to the window to look outside. As she did, she claimed that she had seen a blazing red ball of light pass her window, flooding the room with light and emanating so much heat that she at first thought that it had set her home ablaze. As it rose up it passed over the house and then flew back in front of her, hovering there in the night and so bright that she would describe it as “looking like the Sun was coming up” before finally whizzing off into the distance, illuminating the ground along the way.

The following month, on April 10, 1975, a couple by the names of Bob and Elaine Diemert were out at a private airfield on their rural farmland property when they were startled to see a large red slow-moving light hovering over the tree line not far away. When they approached, they could see through the light that it was a disk shaped object with a dome attached. The object hovered there for about 5 minutes, immersed in a “red, pulsing light,” before flying straight at them and then suddenly veering off to fly off over the tree tops. After this, the mysterious object began to visit their farm on a nearly nightly basis, to the point that droves of curiosity seekers began showing up every evening to see the light show for themselves, with most witnesses describing it as playful and mischievous. Hovering over them, shooting back and forth, approaching observers, and repeatedly flying over their heads in a breathtaking display of aerial acrobatics, it was quite the sight to behold. It was at around this time that people began referring to the object as “Charlie Red Star,” delighting whole crowds of people. A Royal Canadian Mounted Police (RCMP) Constable by the name of Ian Nicholson also came to the Diemert farm to see the object for himself, describing it as “as an oval red light, surrounded with an X-shaped white halo.” The Constable would say:

I sat there for two or three minutes just looking at the object, which appeared stationary at the time. Then I decided to get a closer look at it. I drove west...and I can say I was moving pretty fast. As I was going west, the object seemed to be flying in a northeasterly direction. I continued for approximately 12 miles, keeping the object in sight, trying to get somewhat abreast of it so that if the opportunity presented itself, I could have driven north toward it. About 16 miles west of Carman, I stopped the car. I'd seen there was no way I was going to catch up to it. So I just stopped the car and watched the object go out of sight over the tree line on the horizon.

In the meanwhile, the UFO (or UFOs) was being spotted all over the area by people from all walks of life, most often described as a large bright red, domed disc, sometimes with fiery orbs darting about it. Word was getting out about the very strange phenomena in the skies of the area of Carman, and before long people were pouring into the region to get a look, causing traffic jams and making a big fuss. Many of those who saw the phenomena were traditionally reliable witnesses such as law enforcement officers and pilots. One airline pilot by the name of Roger Pitts saw it, and would say of his experience:

It was flying on a 45-degree angle, but it was still flying straight at us. As we watched, it didn't turn around. It just went directly the other way straight away from us. It just went off into the distance away from us, and a puff of smoke appeared – an odd shape, like a small cloud, and it disappeared in that.

One of the strangest events concerning Charlie Red Star allegedly occurred on the night of May 13, 1975, when a TV news crew comprised of a Bill Kendricks, John Berry, and two others arrived in Carman to see if they could try and film whatever Charlie Red Star was. The crew had arrived on May 11, but had seen absolutely nothing of interest except a far-off slow-moving light that they wrote off as an airplane, but on May 13, things would get strange.  Kendricks headed out to try again, along with a crew including film technician Alan Kerr and newspaper editor Howard Bennett. This time they would witness a light that rose up over the tree line, flashed a bright light, and then shot straight up into the sky at breathtaking speed. The group then split up and the object then returned, and Bennet would say of what he saw:

I could see this big glow behind some trees less than half a mile away off to the right and ahead of us ... It was smoky red, a hazy glow, and to me the thing was higher than the trees, maybe 50 feet tall. It was about 20 feet thick and was sitting at an angle of about 45 degrees. The edges were fuzzy and not sharply defined. It was much like seeing a drive-in movie screen from the side.

The other groups also saw it, describing it as looking “like a blood red Moon” bobbing up and down through the trees, always completely silent. Allen Kerr, the cameraman, was even able to capture a few seconds of footage of the object as it flew overhead, although since it merely shows a red light in the sky it is inconclusive. The team would return to the site a few days later with a radiation meter and claim to have found several spots with radiation anomalies. What was going on here and what did this crew see and film? Sightings would continue on through the summer. On June 4, 1975, a farmer was out in his pasture when he saw a huge, glowing red disk with two domes on top. It was so frightening to him that he tried to leave in his truck but the craft allegedly made his engine die before flying off. On July 1st, a group of three witnesses saw the object hovering and moving about erratically around a grain elevator before landing in a nearby field and then flying off. These witnesses would give a very detailed description of the object, with one of them reporting:

It was about 85 feet in diameter and perfectly round so round it was unbelievable. It was saucer shaped...and the top and bottom travelled in different directions. The bottom one spun...to the right, and the top one spun to the left. There was a center section that didn't move, about six to eight feet in width, and there were oval shaped windows in it. I'd say that there were about 16 windows in the whole circumference, eight looking on the side we were on. 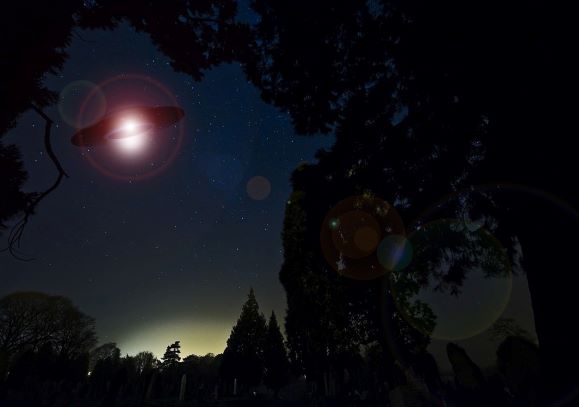 The very next day, another witness claimed that the object had landed in one of his fields and left behind an oval patch of dead vegetation and “tripod marks.” The sightings went on throughout the summer, and the Carman region was becoming well-known nationwide as a UFO watching hotspot. People from all over Canada and the United States came in large numbers to catch a glimpse, with some even claiming to have chased it in their cars, and there were hundreds of sightings reported throughout the summer. Sightings of Charlie Red Star would continue on through the fall and winter, and well into 1976 before decreasing in frequency and then just stopping altogether to leave the area in bafflement. UFO researcher Grant Cameron would provide the most in-depth account of these events in his book Charlie Red Star: True Reports of one of North America's Biggest UFO Sightings, where there is a treasure trove of more sightings like these in great detail, and Cameron himself even says he witnessed Charlie Red Star on several occasions. He would wait over 30 years before publishing his research on the strange flap, and would later speculate that whatever it was, it had been drawn to secret nuclear facilities in the region just south of the U.S. and Canadian border. He would find that the missiles being stored there had been removed at the end of 1975, and that this might have a connection with the phenomena stopping.

In the end there is little that we can do to come to terms with all of these sightings. We don't know what the objects or objects were, or what they wanted. Why did this happen here in this nondescript little place? Where did it come from and what did it want? Was this all hallucinations and a massive hoax, or was it something else? It remains unknown.

The Origins of the Men in Black, “Thanks” to Albert Bender: Part 2