Today, I'm going to focus on a Flying Saucer-themed movie that - in many respects - helped the UFO phenomenon of the 1950s to take off, and in a big-time fashion.  That's not to say there weren't other Saucer-driven movies out there that left their mark. But, this one was, and still is, unbeatable. I’m talking about one of the most famous sci-fi movies of all time. Namely, 1951’s The Day the Earth Stood Still. Not only did it amaze and entertain audiences around the world, but, also, it brought to sci-fi fans a new fascination for all things of a robotic nature. In the wake of the movie many tried to follow in the footprints of The Day the Earth Stood Still. Most failed. As for the theme of the story, it was unlike most of what had come before. This was a movie designed to have its audience think, to show how we, the Human Race, were, the most dangerous creatures on planet Earth. And, to draw parallels between the worlds of on-screen fantasy and the growing threat of the Cold War. There’s also a fascinating allegory to the movie, too. With that said, let’s take a look at the story.

Made by 20th Century Fox, the movie starred Michael Rennie (who, before The Day the Earth Stood Still, appeared in 1945’s Caesar and Cleopatra and later, in 1960, The Lost World) as a very human-looking alien with the name of Klaatu. Interestingly, there was barely a solid love aspect to the movie, an approach hardly ever seen in most of the sci-fi of the movies of the early 1950s. That’s not to say there wasn’t a leading co-leading lady. There was: Helen Benson, played by Patricia Neal. Her character was not one driven by screams and fainting in every other shot, as in so many productions of its era. Then, there was actor Sam Jaffe, an Albert Einstein-type character who comes to realize that the Human Race is not the most important planet in the Universe, nor is it the most scientifically advanced, either. As for Helen’s son Bobby Benson (played by Billy Gray), he, too, has an integral role in the movie. Finally, there was Lock Martin, the man who played Gort. For those who may not know, Gort was, arguably the star of The Day the Earth Stood Still. Even though he/it was a robot. And a giant-sized one, too. 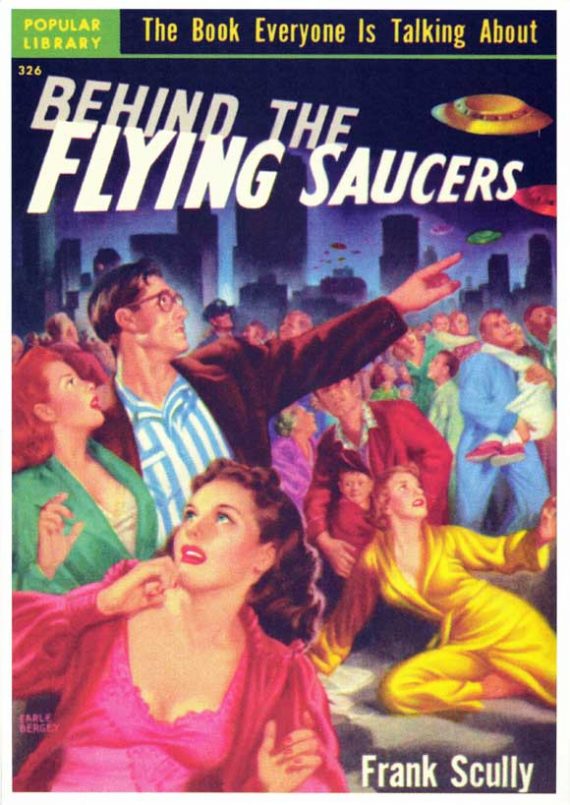 Behind the Flying Saucers, book written by Frank Scully.

We have to take note of the fact that it was in 1947 when the "Flying Saucer" rage began. Four years later, Flying Saucers were still big pulls in the theaters. Hollywood knew that. Astutely, too. However, the crew – Robert Wise, the director; the producer, Julian Blaustein, and Edmund H. North, who handled the screenplay, based on Harry Bates’ story, Farewell to the Master – wanted something a bit different. Hollywood did exactly that. As the movie begins, we see a definitive, large Flying Saucer soaring across the skies of the world, eventually coming to land in Washington, D.C. People everywhere are amazed and frightened; particularly so when a "doorway" in the craft opens and a humanoid figure appears. Things go deadly quiet. Naturally, the military moves in and it all gets a bit antsy, to say the very least: suddenly, one of the contingent of soldiers in the area fires his gun, injuring what turns out to be an alien looking just like us. Indeed, there is no green skin, bulging eyes, or claws. And so on. If it wasn’t for the spacesuit-type the being wears, he would be able to move among us with ease. Later in the movie, he does exactly that.

We learn that the name of the alien is Klaatu. His robot sidekick, Gort, is an ominous, towering robot that may look like a clunking, slow creation, but that is actually a creation with incredible destructive power. As the story expands, it becomes clear that Gort has the ability to wipe out not just the Human Race, but also our planet, too. Klaatu says: "For our policemen, we created a race of robots. Their function is to patrol the planets in spaceships like this one and preserve the peace. In matters of aggression, we have given them absolute power over us. This power cannot be revoked. At the first sign of violence, they act automatically against the aggressor. The penalty for provoking their action is too terrible to risk. The result is, we live in peace, without arms or armies, secure in the knowledge that we are free from aggression and war, free to pursue more profitable enterprises. Now we do not pretend to have achieved perfection, but we do have a system, and it works."

As for Klaatu’s home planet, we’re never told the actual world from which the man from the stars comes. After being injured as a result of the gun-happy soldier, Klaatu is taken to Walter Reed Army Hospital. When it becomes clear to Klaatu that U.S. authorities will not let him leave, he escapes, making his way to a boarding house, using the name of "Mr. Carpenter." It doesn’t take long before Bobby, his mother, and Helen’s semi-"boyfriend" Tom Stevens - played by Hugh Marlowe - we learn who Mr. Carpenter really is. Klaatu warns the world of the incredible power that practically-invincible Gort can unleash on the Earth, but not before he is killed and resurrected. We’re talking about the end of life on the Earth. As Klaatu says:

“Your choice is simple: join us and live in peace, or pursue your present course and face obliteration. We shall be waiting for your answer.” Klaatu and mighty Gort take to the skies, while the people of Earth – and particularly so our world leaders – ponder on the future. If, that is, we are allowed to have a future. There’s another angle to all of this, too. Namely, the religious one. Bright Lights Film Journal say of this: “The Day the Earth Stood Still’s (1951) Christian analogy comes into play. We have free will and can decide to ignore the superior beings’ instruction. However, to ignore it means we are condemned to a hellish end." Still on the matter of religious analogies, Bright Lights Film Journal say: "The name 'Carpenter' refers to the Son of God’s earthly vocation… He emerges – resurrected – from the ship and delivers a harsh message before his ascension to the heavens… Klaatu/Carpenter’s gathering of scientists recalls the young Jesus talking to the rabbis in the temple."

Not only a great movie to ponder on deeply, but also one that brought a whole new type of robots and aliens to the world’s pop-culture and for a new decade. It should be noted that much of the theme of The Day the Earth Stood Still inspired a group of predominantly American figures who became known in the UFO research arena as "Contactees." They claimed face-to-face contact with Klaatu-like aliens and who warned of nuclear war and irreversible ecological danger. And they looked very much like Klaatu, too: enigmatic and wise and, on top of that, somewhat bullying in tone and action. One only has to read the following, though, to see how The Day the Earth Stood Still drove the Flying saucer community. In the next article, you'll see how the aforementioned Contactees quickly became the driving forces of UFO research in the early 1950s.