A massive millipede that roamed around England hundreds of millions of years ago was around the same size as a car. In fact, it is the oldest and largest fossil of a giant millipede that has ever been discovered and the biggest known invertebrate of all time.

It dates back approximately 326 million years during the Carboniferous Period when the climate in that area was more tropical. Actually, the creature only seemed to have lived in areas that were near the Equator which was where Great Britain was located during that time. Based on the date, this millipede was around more than 100 million years before the dinosaurs first appeared. 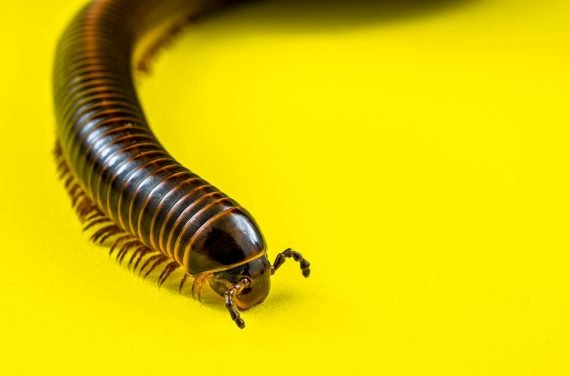 The creature, which has been named Arthropleura, was found on a Northumberland beach in the northern part of England (approximately 40 miles north of Newcastle). Incredibly, it was a completely unexpected find as a big sandstone block fell from a cliff onto the beach at Howick Bay. “The way the boulder had fallen, it had cracked open and perfectly exposed the fossil, which one of our former Ph.D. students happened to spot when walking by,” explained Dr. Neil Davies from Cambridge's Department of Earth Sciences.

Numerous exoskeleton segments were found with one segment measuring around 75 centimeters in length (29.5 inches). This means that the creature would have been approximately 2.7 meters in length (8.9 feet) and weighed as much as 50 kilograms (110 pounds). That is one massive millipede.

Interestingly, this is only the third Arthropleura fossil that has been found – the other two were discovered in Germany, but were a lot smaller than the one in England. And there is still much to learn about them as stated by Dr. Davies, “Finding these giant millipede fossils is rare, because once they died, their bodies tend to disarticulate, so it's likely that the fossil is a molted carapace that the animal shed as it grew,” adding, “We have not yet found a fossilized head, so it's difficult to know everything about them.”

As for why and how Arthropleura became so massive, there are several possibilities, such as high amounts of atmospheric oxygen and a high-nutrient diet. “While we can't know for sure what they ate, there were plenty of nutritious nuts and seeds available in the leaf litter at the time, and they may even have been predators that fed off other invertebrates and even small vertebrates such as amphibians,” Dr. Davies noted.

Arthropleura survived for about 45 million years before going extinct. While it’s unclear as to the exact cause of their extinction, it may have been because global warming caused the climate to become overly dry. Another possibility is that they had to compete for food with the increased numbers of reptiles.

The Arthropleura specimen found in England will be put on display for the public to view in the New Year at Cambridge's Sedgwick Museum. Until then, pictures of the fossil and an image of what it would have looked like can be seen here.

The research was published in The Geological Society.