A castle in Cumbria, England, is said to be haunted by several spirits that include a murdered child and a trickster. Dating back to the 13th century and owned by the Pennington family, Muncaster Castle is known as one of the most haunted locations in the entire United Kingdom.

The Tapestry Room is considered to be the most paranormally active area in the castle. A ghost named Thomas Skelton (also known as Tom Fool) apparently enjoys playing tricks on visitors, employees, and family members. It’s been said that Tom was a jester who died around the year 1600. He decapitated a carpenter who was in love with Sir Pennington’s daughter and even the headless ghost is sometimes seen wandering around.

Sounds of a crying child near the window at the end of the Tapestry Room and a singing woman have been heard – perhaps a mother comforting her infant? Some people think that the crying sounds are coming from the spirit of Margaret Pennington who was quite often sick and who passed away at the castle when she was still a child. There have been reports that the room was once used as a child’s nursery.

Other paranormal activity in the Tapestry Room includes sudden cold spots and people feeling like they’re not welcomed there. Some guests who have slept in the room have reported seeing black figures leaning over them and feeling like something heavy was lying on top of them.

Another ghost that roams around the property has been nicknamed the “Muncaster Boggle” or the “White Lady”. She has been witnessed in the gardens and roadways that surround the castle. It is believed to be the spirit of a girl named Mary Bragg who was murdered on the road close to the castle’s main gate back in the early part of the 1800s. She was apparently in love with a footman at the castle but a housemaid did not appreciate the competition for her crush and that’s why Mary was murdered. 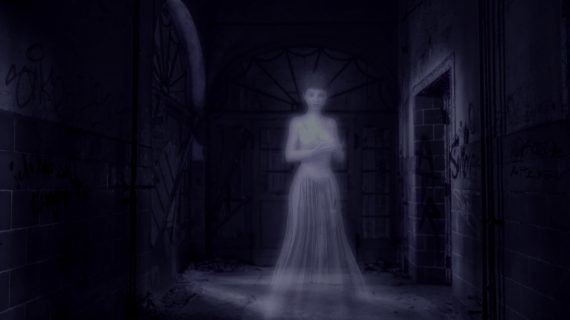 When an archaeologist named Clifford Jones began excavating the property several years ago, he may have disturbed another ghostly presence as he heard the sounds of someone cutting wood during the night while he was staying in the castle towers. He went out to investigate the noise but found that nobody was around; however, when he said, “Please stop the noise”, it suddenly went quiet. At that point, he went back inside where several strange things happened like the light bulbs blowing in the bathroom, the landing, and the lounge.

Additional paranormal activity at the castle includes hearing unexplained footsteps in the corridors, as well as door handles turning and the doors opening without anyone around them. That is one spooky castle.