Hundreds of dinosaur footprints have been discovered in a clay mine close to the village of Borkowice, Poland. It is such a significant find that experts have called it the most spectacular discovery ever made in Poland, as well as the largest find in all of Europe and possibly even the world.

The dinosaur tracks date back approximately 199 million years during the early part of the Jurassic Period that is known as the Hettangian Age (this was between 201.3 and 199.3 million years ago). They were found by Professor Grzegorz Pieńkowski from the National Geological Institute in Warsaw, as well as geologist and paleontologist Dr. Grzegorz Niedźwiedzki from Uppsala University.

The tracks were so remarkably preserved that Dr. Niedźwiedzki explained them as looking like “…the dinosaurs were walking there yesterday,” adding, “This will make the site the largest collection of its type in Europe.” In fact, they were so well preserved that they have been compared to the best quality ones that were previously found in North America, Greenland, South Africa, and China.

The footprints were found in rocks with approximately 60 big blocks containing hundreds of tracks that have been recovered thus far. The researchers are planning on excavating over 200 additional blocks of rocks in the coming months and there could be as many as thousands more footprints that have yet to be found.

The prints were made by carnivorous and avian dinosaurs. Some of the tracks were made by sauropodomorphs (this group includes the Brontosaurus). The biggest footprints measured 40 centimeters in length (15.7 inches) which means that the dinosaurs that left them would have measured as tall as 6 meters (19.7 feet). What’s even more remarkable is that the claws and skin were imprinted in the rocks. 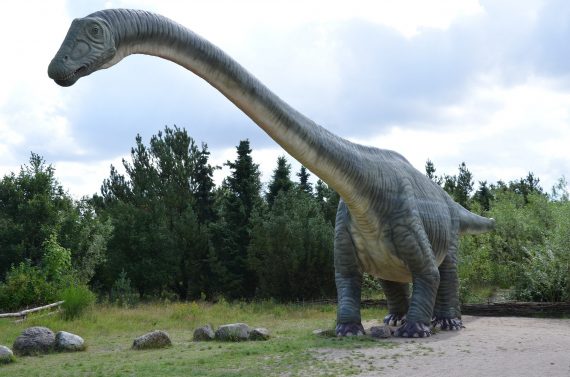 Another interesting fact is that even though hundreds of footprints were found, actual dinosaur bones are quite rare in Poland. The reason why not many dinosaur fossils have been found is because a lot of the country was under water millions of years ago and the fossil site near Borkowice was a coastal area.

This is certainly a very important and exceptional find as Professor Pieńkowski stated, “I have never seen such a treasure trove before.” Pictures of some of the footprints can be viewed here.