As the sand runs out of the 2021 hourglass (ask your grandfather for an explanation), everyone is issuing their ‘Best of 2021’ lists. Today we look at the Best Orb Sighting of 2021. And the winner is?

"It's amazing - it's a real mystery why the light dropped. It's some of the best footage I've seen this year."

That nomination comes from Christian Jensen ‘Chris’ Romer, chairman of the Association for the Scientific Study of Anomalous Phenomena (ASSAP) – a UK “scientifically-orientated educational and research charity and learned society dedicated to a better understanding of anomalous phenomena.” He should know his orbs when he sees one … right? Here’s a video from an outdoor surveillance camera in Norfolk, England, of what Chris Romer is referring to. (Video here.) Did you see it? What did you think – was it the best orb YOU have ever seen? After viewing the video, would you consider Chris Romer to be a “paranormal whizz” as The Mirror and other media sources refer to him?

"At the same time, my neighbor said that before the houses were built in this place, there was a factory where they made bricks. And local workers in the evenings wore such headlamps. So it could be the ghost of one of the workers."

The unnamed owner of the video thinks she recorded a ghost of a miner still wearing his helmet, and she points out the light seems to be on half of a body. However, she’s convinced it wasn’t a live person – miner or otherwise – because her neighbor’s camera didn’t pick it up. A local folklorist says he can’t rule out a ghost yet.

"The uneven movement of the fire makes me wonder if this fire is being carried by someone who, for some reason, does not appear in the frames. Besides, in our places there are tales of ghost fires and cadaveric candles. I assume there is a natural explanation for this, but I can't say definitively without further research into this video."

Cadaveric or corpse candles (ignis fatuus ) are often reported over marshes or in churchyards or outside of houses and are said to be harbingers of death. Folklorists say the size indicates the age of the victim – a small pale blue light is said to signal an infant death. The owner of the video doesn’t seem to mention any deaths. Paranormal News also quotes parapsychologist Dr. Becky Smith, who doubts it’s a ghost but can’t explain why “the figure seems to duck about halfway.” Did you see it? (Watch the video again.) 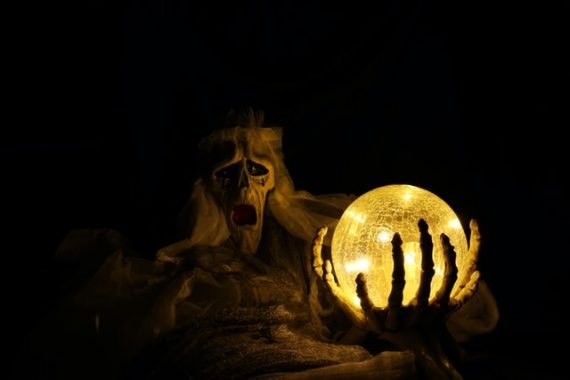 Whatever the orb is, it hardly looks to this writer like something worthy of the designation ‘Best Orb of 2021” – unless 2021 was a particularly bad year for orbs. Could it be because the coronavirus is orb-shaped? In fact, Chris Romer is said to admit it's probably not paranormal activity and is more likely to be someone carrying a mobile phone with the light on with their body not seen because of poor lighting. It sounds like Romer may have been taken out of context … and the term “whizz” was applied by the media, not him or his organization.

There's still a little time left to 2021 – charge up your phone and go orb-hunting … you could be the Best of 2021 in something!