One of the Most Fantastic of All Sea Serpent Encounters

On January 18, 1875, the Pauline was sailing twenty miles off Cape Rogue, on the northeastern side of Brazil, when, at around 11:00 a.m., something remarkable occurred, as George Drevar, the master of the Pauline, made abundantly clear, in a carefully prepared report. It’s a fascinating, historical document that deserves to be presented in its entirety: "The weather fine and clear, the wind and sea moderate. Observed some black spots on the water, and a whitish pillar, about thirty-five feet high, above them At the first glance I took all to be breakers, as the sea was splashing up fountain-like about them, and the pillar, a pinnacle rock bleached with the sun; but the pillar fell with a splash, and a similar one rose. They rose and fell alternately in quick succession, and good glasses showed me it was a monster sea-serpent coiled twice round a large sperm whale. The head and tail parts, each about thirty feet long, were acting as levers, twisting itself and victim around with great velocity. They sank out of sight about every two minutes, coming to the surface still revolving, and the struggles of the whale and two other whales that were near, frantic with excitement, made the sea in this vicinity like a boiling cauldron; and a loud and confused noise was distinctly heard." 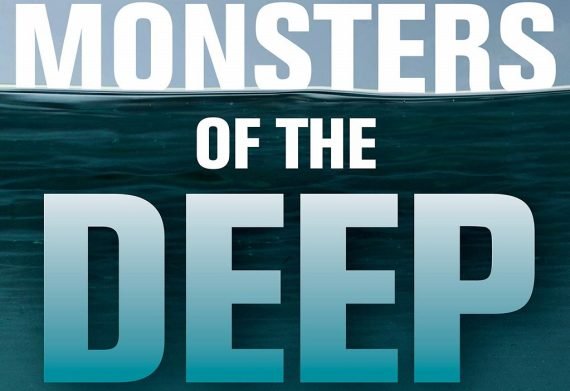 The saga continues: "This strange occurrence lasted some fifteen minutes, and finished with the tail portion of the whale being elevated straight in the air, then waving backwards and forwards, and lashing the water furiously in the last death-struggle, when the whole body disappeared from our view, going down head-foremost towards the bottom, where, no doubt, it was gorged at the serpent’s leisure; and that monster of monsters may have been many months in a state of coma, digesting the huge mouthful. Then two of the largest sperm whales that I have ever seen moved slowly thence towards the vessel, their bodies more than usually elevated out of the water, and not spouting or making the least noise, but seeming quite paralyzed with fear; indeed, a cold shiver went through my own frame on beholding the last agonizing struggle of the poor whale that had seemed as helpless in the coils of the vicious monster as a small bird in the talons of a hawk. Allowing for two coils round the whale, I think the serpent was about one hundred and sixty or one hundred and seventy feet long, and seven or eight in girth. It was in color much like a conger eel, and the head, from the mouth being always open, appeared the largest part of the body. I think Cape San Roque is a landmark for whales leaving the south for the North Atlantic."

The story isn't over yet: "I wrote thus far, little thinking I would ever see the serpent again; but at 7 A.M., July 13th, in the same latitude, and some eighty miles east of San Roque, I was astonished to see the same or a similar monster. It was throwing its head and about forty feet of its body in a horizontal position out of the water as it passed onwards by the stern of our vessel. I began musing why we were so much favored with such a strange visitor, and concluded that the band of white paint, two feet wide above the copper, might have looked like a fellow-serpent to it, and, no doubt, attracted its attention. While thus thinking, I was startled by the cry of 'There it is again,' and a short distance to leeward, elevated some sixty feet in the air, was the great leviathan, grimly looking towards the vessel. As I was not sure it was only our free board it was viewing, we had all our axes ready, and were fully determined, should the brute embrace the Pauline, to chop away for its backbone with all our might, and the wretch might have found for once in its life that it had caught a Tartar. This statement is strictly true, and the occurrence was witnessed by my officers, half the crew, and myself; and we are ready, at any time, to testify on oath that it is so, and that we are not in the least mistaken. A vessel, about three years ago, was dragged over by some sea-monster in the Indian Ocean.”

Fantastic, to say the least!