Ancient footprints discovered in Spain that date back to the early part of the Cretaceous Period (between 145 and 66 million years ago) have revealed that theropod dinosaurs were exceptionally fast runners.

In fact, they were as speedy as Jamaican sprinter Usain Bolt who is referred to as the fastest human on the planet with a running speed of 27.5 miles per hour (44.3 kilometers per hour). The two sets of footprints that were recovered at a site in La Rioja, Spain, revealed that the dinosaurs ran at a top speed of almost 28 miles per hour, making them “some of the top speeds ever calculated for theropod tracks” as described by the researchers of the new study. 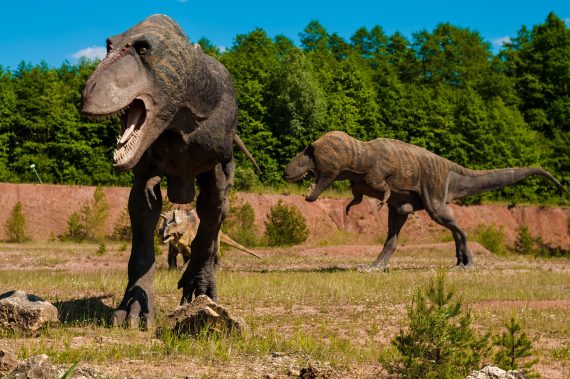 One of the sets of tracks called La Torre 6A-14 contained five footprints that measured 12.9 inches in length by 11.9 inches in width. This dinosaur ran at a speed of a little more than 23 miles per hour (37 kilometers per hour).

The second set of tracks named La Torre 6B-1 included seven footprints that measured 11.4 inches in length by 10.6 inches in width. This creature ran at a speed of 27.7 miles per hour (44.6 kilometers per hour).

These carnivorous theropod dinosaurs left their three-toed tracks behind in lake bed mud that eventually fossilized. Extensive analysis of the footprints concluded that one dinosaur consistently gained speed as it ran, with the other one changing its speed in a fast and abrupt manner.

Pablo Navarro‐Lorbés, who is a researcher at the University of La Rioja in Logroño, Spain, described the significance of the discovery by stating, “Fast-running theropod tracks are scarce in the fossil record,” adding, “Being able to study them and confirm some other studies made from different approaches are great news for us.”

By analyzing the footprints, the researchers were able to conclude that the theropod dinosaurs that left the tracks would have been approximately 7 feet tall (2 meters) and 13 to 16 feet in length (4 to 5 meters).

While it is known that the tracks were left behind by theropod dinosaurs, the exact genus is still unclear. However, studies performed on the footprints do suggest that the two dinosaurs were part of the same taxonomic group; they were “very agile”; and they were non-avian. The study was published in the journal Nature where it can be read in full.

A picture of one of the footprints can be viewed here.