Located right next to the village of Glamis, in Angus, Scotland, is an imposing turreted fortress called Glamis Castle. The structure looks like something out of a dark fairy tale, with lofty towers, turrets and very thick surrounding walls, and it has a rather long and storied history. It has been the home of the Lyon family since the 14th century, and was the childhood home of Queen Elizabeth The Queen Mother, wife of George VI. The structure that can be seen today dates largely from the 17th century, and although it still belongs to the Lyon family, it has largely been abandoned since the 18th century. It now sits as a category A listed building, and its expansive grounds hold a place on the Inventory of Gardens and Designed Landscapes in Scotland. It is a beautiful, yet spooky structure, and it may come as no surprise that it also has its fair share of eerie stories and legends that infuse it with a sense of myth and mystery. Here we have all manner of tales of ghosts, spirits, demons, and a monster prowling these cold stone halls, earning it a reputation as one of the most haunted castles in Scotland, so let’s take a look.

By far the most well-known scary tale from here is that of what is commonly called “The Monster of Glamis,” or sometimes known as the “Horror of Glamis.” The story behind this supposedly begins with a hideously deformed child born to the first child of Thomas Lyon-Bowes, Lord Glamis, and his wife Charlotte Lyon-Bowes in 1821. The baby was also named Thomas Lyon-Bowes, and although official records state that the child was so deformed that it died not long after birth, the lore says otherwise. The story goes that the child survived, and as he was an embarrassment to the family and as he was the rightful heir to be an earl, he was sequestered away to languish in a secret room within the castle out of sight. He was apparently sometimes let out, and this is where sightings of a strange creature lurking about the property would start to be circulated by locals. The appearance of the monster varied, with some saying it was ape-like, with others claiming it was “half-frog, half-man” or “a human toad,” and one description from the era says that it was “a creature fearful to behold…a deformed caricature of humanity…his chest an enormous barrel, hairy as a doormat, his head ran straight into his shoulders and his arms and legs were toy-like.”

As this was going on, rumors spread about the dank secret chamber from which the monster would emerge, and there were accounts of groundskeepers and servants at the castle being threatened or paid off to keep it all a secret. Various guests to the castle apparently secretly looked for the rumored secret room but were unable to find it, and the Lyon family themselves constantly denied that there was any “monster” or hidden room. Indeed, family members were instructed to not even talk about it, and they refused to even acknowledge the stories. Nevertheless, the rumors continued and there were sometimes said to be those who actually found it. For instance, the popular 19th-century novelist Sir Walter Scott was said to have found it during a stay at the castle, Lord Ernest Hamilton was also said to have located it underneath a trap-door embedded on the floor of a dressing room known as the Blue Room, and one report in a 1904 edition of the New York Sun reported on yet another such case in which it was found under the carpet:

On one occasion a young doctor, who was staying in the castle professionally, found on returning to his bedroom that the carpet had been taken up and relayed. He noted that the mark of the carpet was different at one end of the room. By moving the furniture and raising the carpet, he laid bare a trap door, which he forced open and found himself in a passage. This passage ended in a cement wall. The cement was still soft, leaving the impress of a finger. He returned to his room—and next morning received a cheque for his services with the intimation that the carriage was ready to take him to the station for the first train.

In later years there were many stories that the room had been bricked over after the "monster's" death, or that it was otherwise cut off from the world. Even in later years after Thomas was dead, there would be sightings that suggested the deformed atrocity was still lurking about even in death, with sightings to this day of a hulking hunched over, hideous ghostly shadow figure wandering about the castle and grounds. The exact location of the secret room was apparently only ever known to the Earl, his wife, and the estate manager, and to this day no one is sure of where it might be or if it even ever existed at all. Whether there ever was this hidden room or the beastly monster, it is a story that has proven to be very persistent in the lore right up to this day, and whether any of it is true or not, it is damn strange all the same.

The Monster of Glamis is not the only spook said to roam this place, and it certainly seems to keep plenty of company. Another rather well-known ghostly tale from Glamis Castle is that of the 15th century Alexander Lindsay, 4th Earl of Crawford, also known as Earl Beardie due to his thick and prominent beard. He was by all accounts a cruel and twisted man, tormenting his servants relentlessly and a drunken, oppressive taskmaster. One tale even says that he once mercilessly hunted a black servant down with hunting dogs and had him killed, so he probably deserved what was coming to him. The tale goes that one evening the Earl wanted to play cards, but seeing as it was the Sabbath, no one would play with him. The Earl, supposedly drunk out of his wits, growled that he would sit and play cards with the Devil himself. At that exact time, a stranger in a long coat then appeared out of the cold night and offered to play cards with him, during the game revealing himself to be the Devil. The Devil then said that this game was for the Earl’s very soul, and when the Earl lost, he was supposedly doomed to stay at the castle playing cards until doomsday. Ever since then, there have been various accounts of seeing the ghostly form of Earl Beardie, either playing cards or looming over beds, and he apparently makes quite the ruckus sometimes, with disembodied shouting, stomping feet, banging doors and swearing common. 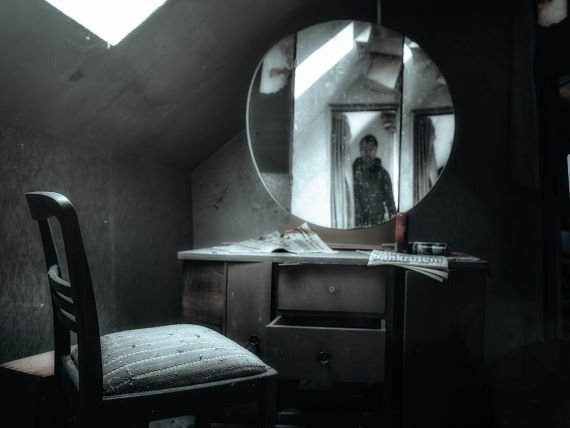 The cast of spectral characters here continues with the apparition of a woman with no tongue, usually described as wagging the bloody stump about and spewing blood from her mouth as she wanders the grounds, and she is often seen at a barred upper window staring out into the countryside. She is supposedly the ghost of a servant who found out some dark secret, after which she was punished by having her tongue cut out and then being put to death. There is also the purported ghost of Lady Glamis, Janet Douglas, who was found guilty of witchcraft and burned at the stake in 1537. She was also accused of trying to poison both her husband and King James V of Scotland, so she had no chance of getting out of her charges. She is usually seen as an apparition dressed all in grey, earning her the name The Grey Lady. Other miscellaneous ghosts at Glamis castle are a butler who hanged himself, an African servant boy, and a haunted chamber where members of the Ogilvy clan were allegedly locked up and left to starve in the 15th century after displeasing Lord Glamis. Rather eerily, it is said that the Earl of Strathmore once heard strange noises coming from beyond the wall there and had it torn down to reveal several skeletons.

It is all indicative of a very mysterious place with plenty of dark history and tragedy surrounding it, perfect for tales of supernatural strangeness. Is there anything to such tales? Are these real accounts or simply spooky lore seeping into the story of a very real and eerie place? Monsters, spirits, and other unidentifiable entities, what is going on here? What tethers these forces to this place? Is there anything to it at all other than local myth? There can be no way to know, and the mysteries of Glamis Castle still swirl about there out in the periphery of what we do not understand.

Hairy Humanoids That Aren’t Bigfoot, the Yeti, or Sumatra’s Orang-Pendek