While January’s sky won’t be as active as December, there will be several decent events that will occur throughout the month that you may want to go outside and check out. Let’s take a look at what to expect in the sky during the first month of 2022.

The first meteor shower of 2022 will be the Quadrantids meteor shower that will peak on January 3rd where you should be able to see up to 80 shooting stars each hour. To spot the meteors, look towards the entire northern half of the night sky. 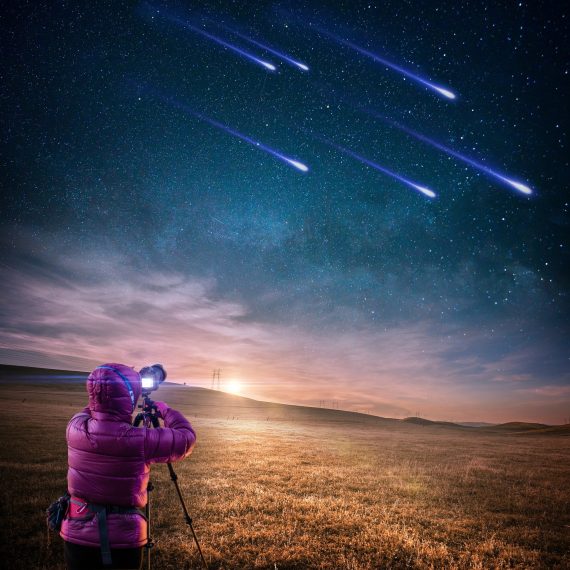 Earth will be at its closest distance to the sun on January 4th – this is called “perihelion”. We will be positioned at just 0.98 AU from the sun.

January 5th will be the conjunction of the moon and Jupiter where they will be located just 4°27′ apart from each other in the night sky. The waxing crescent moon and the bright Jupiter will be located in the constellation Aquarius in the southwestern sky.

Comet C/2019 L3 (ATLAS) will make its closest approach to the sun on January 10th. In fact, with a telescope, you’ll be able to witness the comet during the entire month of January. It will be located high up in the southern sky but it will be quite faint with a magnitude of 9.7.

Mercury will be at its evening peak at 13° above the southwestern horizon on January 11th. If you have trouble spotting the small planet, the much larger Saturn will be really close to Mercury – they will only be a few degrees apart from each other. So, just look for Saturn and you may be able to spot Mercury close by.

On January 13th, Asteroid 7 Iris will be at opposition (this means the sun will be on one side of us, while the asteroid will be on the exact opposite side). With a telescope, you’ll be able to see Asteroid 7 Iris in the constellation Gemini.

Comet 104P/Kowal will be at its brightest on January 18th. While it will be located only 0.65 AU away from our planet, you will still need to have a telescope to view it in the constellation Cetus.

The peak of the γ-Ursae Minorid meteor shower will happen during the night of January 19th where you should be able to see up to three shooting stars each hour in the constellation Ursa Minor close to the bright Polaris star. Since the moon will be very bright from being full just a couple of days earlier, you may have a difficult time spotting the meteors.

The last sky event of January will occur on the 20th when Comet 19P/Borrelly will be at its brightest. It will be located approximately 1.23 AU from us and will be the easiest to spot during the hour after the sun sets, even though you will need a telescope. You will be able to find it in the constellation Cetus.