Archaeologists in Peru unearthed an ancient mummy that dates back between 800 and 1,200 years. What’s so unusual about this mummy is that it was bound with rope with the hands covering the face.

The team was very surprised that they found a mummy during their excavations as explained by archeologist Yomira Huamán Santillán in an interview with CNN, “The whole team was really happy because we didn't think this was going to happen,” adding, “We didn't expect to make such an important discovery.”

The preserved body was found by researchers from the National University of San Marcos. It was located underneath the middle of a town square at an archaeological site called Cajamarquilla which is near the capital of Lima.

The mummy was probably a man between the ages of 25 and 30, although that hasn’t been confirmed as of yet. He may have come from the mountains of Cajamarquilla where it was once a busy commercial center during the pre-Columbian times.

The fact that he was tied up with rope and his hands were covering his face was actually a funeral custom in the southern part of Peru. Pieter Van Dalen Luna, who is one of the archeologists who led the excavation, stated, “The discovery of this resident sheds a new light on interactions and relationships in pre-Hispanic times.”

In addition to the mummy, the researchers found numerous marine mollusks outside of the tomb which was quite odd as the site is approximately 25 kilometers (15.5 miles) away from the coast. They even recovered llama bones there as well. But Van Dalen Luna believes that it was the individual’s descendants who placed the items and different offerings (such as food) there throughout the years. 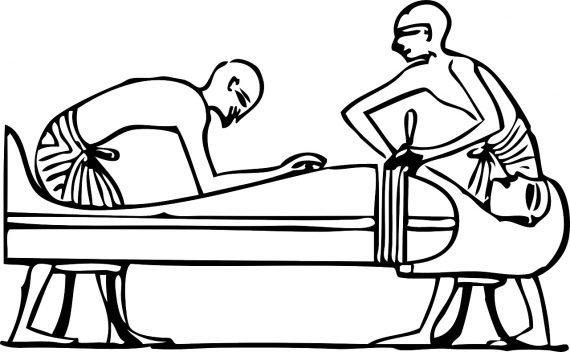 Based on the items found at the site, it is believed that this person was very important during that time and perhaps a significant trader. “The fact of finding a mummy with these characteristics in the middle of the plaza makes it clear that this is someone of high status,” said Van Dalen Luna.

Their next job is to analyze the mummy in further detail in order to gather more information regarding the individual, such as radiocarbon dating to narrow down a more precise time when he was alive.

A news report about the discovery can be viewed here and pictures of the mummy can be seen here.