What Do Government Agencies Know About “Missing Time” and Extraterrestrial Kidnaps?

You may have seen my recent article on a UFO incident that occurred on November 8, 1966 - near Shrewsbury, England - and that involved a young woman named Diane Foulkes. Diane had a classic case of UFO-driven "Missing Time." Notably, U.K. military police descended onto Diane's home, created a file on the incident, and interviewed her and her parents about the encounter and her lost time. The incident makes for fascinating reading. There's a reason why I mention this: it's because I find it very strange that so many people laugh at the idea of government agencies quietly interviewing alien abductees and those with erased minds. Or, rather, briefly erased minds. The fact is, though, this has been going on for a long time. Let's have a look at some cases. Evidence of serious, government concerns about the real alien abduction phenomenon continued into the 1950s, specifically in 1959. That was the year in which a young American soldier found himself caught up in a very strange saga that, to a degree, still disturbs him to this very day. It all went down on a chilly night in Utah’s expansive desert. Private Bernard Gerry Irwin was the man whose life took a turn of the decidedly unforeseen type. February 20, 1959 began as a regular day for Irwin, but, it most definitely didn’t end that way. At the time, Irwin was driving to Fort Bliss, Texas, from Idaho – the former being the facility at which Irwin was stationed, and the latter his home state. As night set in, something completely unforeseen and paradigm-shifting happened to Irwin. He was about to be confronted by the UFO phenomenon in spectacular and mysterious fashion.

The night was dark, silent and all but empty of vehicles. As desert highways so often are well after sunset. But, for Irwin this was a night he would never forget – which is somewhat ironic, as a result of the fact that certain portions of his memory were forever erased from his mind. As he drove along the winding, curving road, Irwin was suddenly distracted by a bright light in the night sky – but at a distinctly low level – which descended below a looming ridge. A meteorite? No. A flare, perhaps? Wrong again. Maybe an aircraft in trouble? That was Irwin’s first thought and, with that in mind, he brought his car to a stop at the side of the road, and turned on the blinkers. He quickly got out, and left a note for passing drivers. It read: Have gone to investigate what looks like a plane crash about one-quarter mile to my right. Notify state police immediately. Wearing his Army coat and armed with a flashlight, Irwin headed off into the unknown. Irwin headed for what he suspected – and feared – just might be the site of a plane crash, only to find himself in an even greater nightmare.  The next thing Irwin remembered was waking up in a hospital bed in Cedar City. Where and why, he didn’t know.

Certainly, one of the most notable pieces of evidence that has surfaced via the Freedom of Information Act is a document prepared by a Captain Valentine, who was Irwin’s psychiatrist while he was undergoing treatment for his strange condition. On March 27, 1959, Irwin was injected with sodium amytal. It provoked a strange response from Irwin, which caught Captain Valentine’s deep attention. In his official report on this particular drug-induced session, the captain wrote: "[Irwin] stated there was a ‘special intelligence’ that he couldn’t explain to me, since it would be incomprehensible to me, which has directed him not to remember or not to tell me about any of the events in Utah. He says that if he tells what was behind the incidents in Utah there will be a ‘big investigation’ that he does not want to be bothered with and also because it will harm many people and he doesn’t want that to happen. He states ‘it’ all began at the age of three years,’ although he will not reveal how or what began, stating that it would provide a clue to me as to what is behind all this. Also, he informed me that he could leave this hospital any time if he wanted to by invoking a special force. Following this interview the patient stated he could remember nothing of what he said during it." 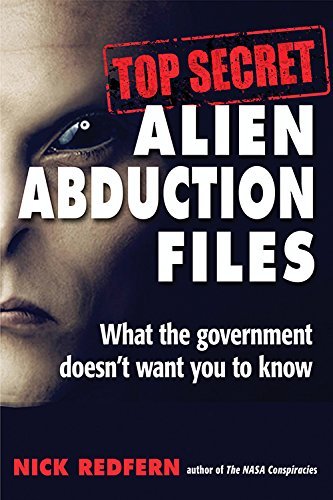 Now, onto another case: Just five months after Betty and Barney Hill’s late night encounter, a similar incident occurred in the U.K. In this case, the witness was a man named Ronald Wildman. It was in the early hours of February 9, 1962 that Wildman had an extraordinary experience, one which led him to fully believe he had seen a UFO at very close quarters: an egg-like thing that put Wildman in a state of amzement. So amazed, and even slightly unsettled, by what occurred, Wildman contacted the local police. It was via the police that the U.K.’s Air Ministry (today, called the Ministry of Defense) came to hear about the story. It turns out that the military learned Wildman had lost a period of missing time. A file, of course, was opened.

The night of October 10, 1973 was one that Calvin Parker and Charles Hickson would not forget. And it all began in a perfectly normal, relaxed fashion. Forty-two-year-old Hickson and Parker – who was nineteen - worked together and often spent time fishing on Mississippi’s Pascagoula River. It was around 9:00 p.m. on a dark and fateful night when their world came tumbling down around them. For a while the fish were biting. It would, however, not be long before the two men would find themselves reeled in. "Hauled in" might be a better piece of terminology. As they sat on the banks of the river, the two could not fail to see that there was an odd, blue, flickering light in the distance – odd in the sense that it seemed to be following the contours of the river, but slightly above it. Both Hickson and Parker stared at it, trying to figure out what on Earth it was. Earth may very well have had nothing to do with it. They wondered: helicopter? But, there was no noise. An aircraft? Way too low and slow. Someone’s idea of a joke? If only. When the strange whatever-it-was got closer, a stark realization quickly hit both men: this was like nothing they had ever seen before. It was a fairly small craft, oval in design, and illuminated – almost glowing. And a vomit-inducing, deep droning sound suddenly enveloped them. Things seemed strange, unreal, dream-like, as the pair tried to scramble away. No such luck: in seconds both Parker and Hickson were rendered almost unable to move.

In no time at all after contacting the police, Parker and Hickson were whisked off to Keesler Air Force Base, which is in Biloxi, on the Mississippi Gulf Coast. They were driven there by a local police-officer: Deputy Tom Huntley, who later made an intriguing statement: "We were in an unmarked car but the guards were expecting us and waved us through the moment I said who I was. I looked back through my rear-view mirror, and damn if two cars full of air police hadn’t fallen in behind us. They had more air police stationed at each crossing all along the road." Officer Huntley eventually revealed much more, too: on being directed to one particular building, a team of medical personnel were already there, waiting for the arrival of Hickson and Parker. Huntley said that after he and Parker and Hickson were directed into the building, a series of tests quickly began. Of the doctors, Huntley added that they "looked like space creatures – all wrapped in white and masked and gloved." Both men had a Geiger-counter ran over them. Their fingers and shoes were swabbed – with each swab carefully placed into separate bottles.

All of this tells us that, yes, government agencies do take an interest in "missing time" cases and alien abductions. The events above are just the start of things.

Countless Ghosts, a Green Monkey, and a UFO All Seen in Brixham