As you will have seen, in the last few days I've written a couple of articles that focus on the involvement of helicopters in UFO (and UFO related) events and phenomena. Now, it's time to round things up with a connection between helicopters and alien abductees. Yes, there is intriguing data on hand that demonstrates at least one secret, helicopter-based organization has been keeping watch on alien abductees. And might still be watching them. With that said, let's have a look at the available material relating to this admittedly strange situation. For years, numerous abductees have reported close encounter with not just UFOs and aliens, but with what have become infamously known as "black helicopters." These usually unmarked craft are reported flying over the homes of abductees. On occasion, they will hover over the same homes for minutes at a time, and at precariously low levels. Typically, they turn up within a day or two of an alien abduction experience. All of the evidence suggests that the helicopters are piloted by "black-ops" teams who have three, primary agendas: (A) to try and determine the range and scope of alien abductions; (B) to frighten the abductees into staying quiet on their experiences; and (C) to figure out the true nature of the extraterrestrial agenda.

Betty Andreasson is a well-known alien abductee and someone whose incredible encounters with extraterrestrial creatures – which began in 1967 - have been chronicled in numerous books by UFO investigator Raymond Fowler. Those books include The Andreasson Affair, The Andreasson Affair – Phase Two, and The Andreasson Legacy. That Andreasson has been the subject of a number of books makes it not at all surprising that there should be a government file on her. This possibility is made all the more likely by the fact that she and her husband, Bob Luca, have had more than a few run-ins with the black helicopters. UFO researchers Barry Greenwood and Lawrence Fawcett took a particular interest in the helicopter encounters that Betty and Bob reported. 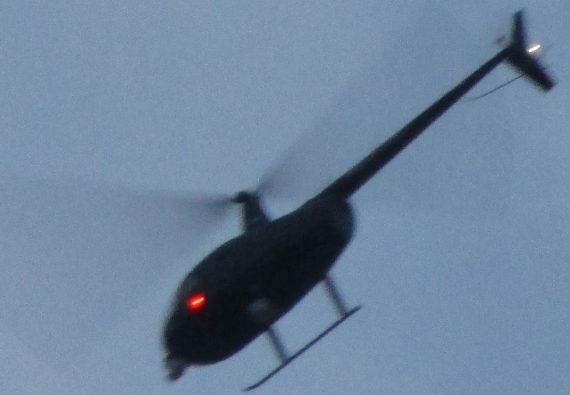 They said that husband and wife "…reported that their home was over flown numerous times by black, unmarked helicopters of the Bell UH-1 Iroquois type and that these helicopters would fly over their homes at altitudes as low as 100 feet. The Luca’s described these helicopters as being black in color, with no identifiable marking on them. They noticed that the windows were tinted black also, so that no one could see inside. During many of the over flights, Bob was able to take close to 200 photos of the helicopters." Moving on: Alien abductee Debbie Jordan has experienced very much the same. She says of the unmarked helicopters she has encountered: "These could be seen almost daily around our houses. They are so obvious about their flights it’s almost comical. On occasions too numerous to even remember, they have hovered around my house, above my house, and above me for several minutes at a time, not trying to hide themselves or the fact that they are watching us. While large questions remain regarding who is flying the helicopters and where they originate from, long-time Ufologist Tommy Blann has a few ideas. From a contact in the U.S. Army Blann was informed that all across the United States there are "underground installations, as well as isolated areas of military reservations [that] have squadrons of unmarked helicopters, which have sophisticated instrumentation on board, that are dispatched to areas of UFO activity to monitor these craft or airlift them out of the area if one has malfunctioned."

In 1989, Ed Conroy, a San Antonio, Texas-based journalist, wrote a book titled Report on Communion. It was an independent study of Whitley Strieber and his incredible experiences described in Strieber's 1987 book, Communion. In taking on the project, Conroy didn’t realize what he had got himself into. At least, not at first he didn’t. What began as an impartial investigation into Strieber’s claims, soon mutated into something very different: Conroy found himself under similar intimidation to that which would eventually hit the Strieber family. Weird phone calls, secret surveillance and – even – visits from our old friends, those mysterious black helicopters, whose crews keep more than a careful watch on alien abductees, abounded.

It was one particular morning in March 1987 that Ed Conroy found himself a target of whoever it is that flies the mysterious helicopters. It appeared to be a Bell 47, said Conroy, and it lacked an identifying markings – which is very curious, but absolutely typical of the helicopters of the phantom type. Notably, said Conroy: "What was remarkable about this particular helicopter was the inordinate amount of attention it seemed to be paying to my building." In no time, and shortly after the Bell 47 finally exited the area, a totally black helicopter was on the scene too. Follow-up visits occurred – something which prompted Conroy to contact the Federal Aviation Administration for answers. No luck there. Things got even more intense in 1988 when Conroy was practically seeing helicopters here, there and everywhere. And particularly, again, in the direct vicinity of his apartment, including the huge, double-rotor, military Chinooks. Conroy even saw some of the helicopters vanish – as in literally vanish. Some kind of stealthy, cloaking technology, perhaps?

What all of this has told us - across the last few days - is that the black helicopter phenomenon is a wide and varied one. They are involved in cattle mutilation incidents, alien abductions, and the monitoring of UFO activity. Many of them fly in complete silence. They have been around, to a significant degree, since at least the earliest part of the 1970s. And, they are still flying around. And still watching and monitoring.