(Note: UFO in picture above is not the one in this article.)

An interesting yet puzzling triangular UFO video appeared this week from Pakistan – interesting because it appeared to be triangular, puzzling because the witness claimed it remained nearly motionless for hours before it became too dark to see it. In this highly militarized country, was the witness looking at some sort of new aerial weapon, an unidentifiable drone, an extraterrestrial craft or something else?

"I saw this when I was landing my drone, it hovered for over 2 hours at this spot when eventually it got dark and I couldn’t see it anymore."

The video was attributed to Arslan Warraich and first posted by The Hidden Underbelly 2.0 YouTube channel. (Watch it here.) According to the narrator, the sighting occurred on January 25, 2022. The witness stated his own drone was out of charge or he would have sent it aloft for better footage. (Had he known he was going to be there watching this UFFO for two hours, he might have had the opportunity.) Although he is allegedly an experienced drone operator, he seems amazed, impressed and frustrated by certain aspects of what he was recording.

"It did move but very slowly, never left the area, saw until the sky went completely dark. It had no lights nor was it reflecting the sunlight much."

"it's just sitting there, not doing anything. I want it to do something, like whiz by or something."

While the witness states (as does the headline) that this is a “black triangular shaped UFO,” it doesn’t look or behave like the typical triangular UFOs most often seen – moving in various directions and speeds, and with three visible lights. Those are most often thought to be secret tests of the alleged TR-3A Black Manta surveillance aircraft said to e a black project of the US Air Force. What Arslan Warraich said he recorded looks and acts nothing like that.

So … what is the UFO in the video?

Being stationary for two hours usually indicates a balloon, which this could be since it had no lights and was not reflecting any (although it seemed to be an overcast evening). Those same characteristics could eliminate a drone – conventional public drones generally can’t stay aloft that long and are bound by the PCAA in Pakistan to stay under 400 feet. Those rules do not apply to police or military surveillance drones – and the political situation in Pakistan would make this option highly likely … except the witness didn’t think so. Finally, it’s odd this witness watched for two hours without notifying anyone else. Also, searches don’t find any other similar reports of a triangular black UFO over Islamabad on this date. 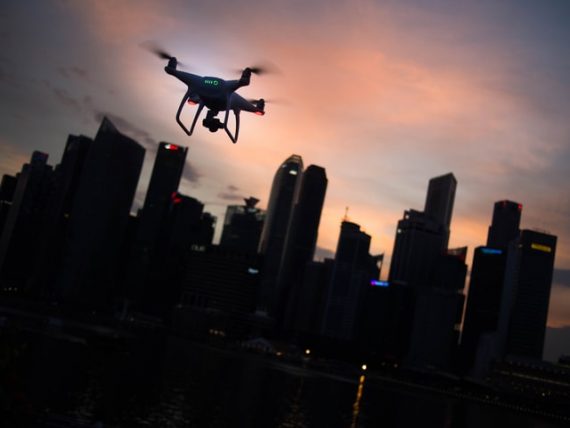 Probably not. This one has the needle of the UFO Explanation Meter in the “Strange drone” quadrant near the “Strange balloon” section for now. As always, it’s great that more people are recoding UFOs and feeling comfortable in reporting them to paranormal sites. It would be greater if there were more official investigative and data collection sites available.

Witchcraft, Demons and the Occult: And Secret Warfare Too