Mars Has Been Bombarded With Asteroids for 600 Million Years

According to a new study that focused on numerous Martian craters, it is believed that the Red Planet has been hit steadily with asteroids for at least the last 600 million years.

A team of scientists came up with this time frame based on the analysis of crater formations around the planet. They used a crater detection algorithm system to study 521 impact craters that all had a diameter that was more than 12 miles (19.3 kilometers). Interestingly, just 49 of those craters appeared in the last 600 million years; however, they were formed at a very steady rate. This information disputes previous work that indicated asteroid impacts were not consistent and happened in “spikes” throughout the last 600 million years that were caused by massive asteroids that broke up in space and sent many smaller chunks onto the planet.

In a statement, Anthony Lagain, who is a research fellow and planetary scientist at Australia's Curtin University, went into further details, “When big bodies smash into each other, they break into pieces or debris, which is thought to have an effect on the creation of impact craters,” adding, “Our study shows it is unlikely that debris resulted in any changes to the formation of impact craters on planetary surfaces.”

Furthermore, the “Ordovician spike” that happened approximately 470 million years ago may have been “[crater] preservation bias rather than a real increase in the asteroid impact flux,” the authors noted. Their study was published in Earth and Planetary Science Letters where it can be read in full.

A picture of one of the Martian craters can be seen here.

This new algorithm may even help scientists in studying lunar craters in greater detail as explained by Professor Gretchen Benedix, “The formation of thousands of lunar craters can now be dated automatically, and their formation frequency analysed at a higher resolution to investigate their evolution.”

It was previously reported that about 800 million years ago, the moon and Earth were hit with a gigantic meteor shower that sent between 40 and 50 trillion metric tons of meteoroids onto our planet. Researchers were able to calculate this by studying 59 lunar craters that measured at least 12 miles in width, thanks to data collected by the Japanese lunar orbiter spacecraft Kaguya. 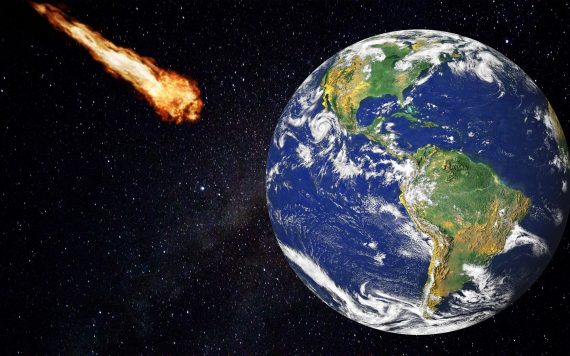 It was later revealed that between 3.5 and 2.5 billion years ago when Earth was very young, it suffered a pretty steady bombardment of enormous asteroids about the size of a city with some of them even being as massive as a province. These giant impacts occurred about every 15 million years.

I guess Mars wasn’t the only planet that suffered a consistent pounding of asteroids.