Not So Mighty! Medieval Warhorses Were the Size of Ponies

When we think of warhorses, most of us imagine a large, strong, fearsome animal, but that couldn’t be any further from the truth. According to new research, medieval warhorses were in fact quite small – about the size of modern ponies.

By examining approximately 2,000 horse bones which date back between the 4th and 17th centuries that were unearthed at a medieval horse cemetery, numerous castles, and additional archaeological sites around England, a team of historians and archaeologists were able to determine the sizes of the horses.

They also looked at historical records and fictional stories as described by Professor Alan Outram from the University of Exeter’s archaeology department, “It turns out that things are not quite as they have usually been portrayed,” adding, “In popular culture, warhorses are often depicted as the size of a shire horse. It really wasn’t like that. Most medieval horses are surprisingly small. There are very few that are the sort of size portrayed in film or even in exhibitions.” 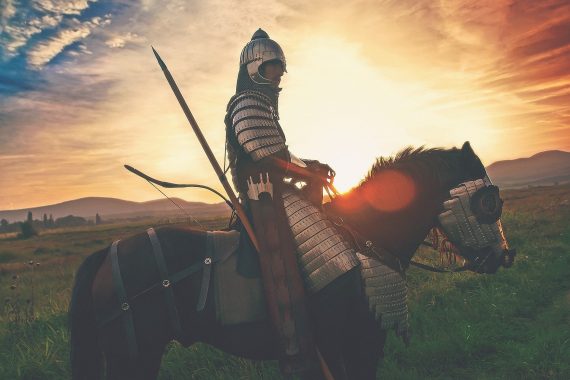 He went on to say that the remains of most of the horses (these included some that were used during war) were no taller than 14.2 hands (4 feet 10 inches or 1.5 meters) – the size of a pony. One of the largest horses they discovered was from the Norman Period (between the 11th and 12th centuries) and unearthed in the grounds of Trowbridge Castle in Wiltshire. It measured just 15 hands – not much taller than a modern pony.

Interestingly, not many horses have been unearthed on battlefields, so it was difficult for the researchers to determine which of them were actually used in battle.

While the horses were small, they were still very useful, especially for conducting long-range raids, attacking a retreating army, and moving equipment. “In the 13th and 14th century especially the royal stud was an amazing network,” Outram explained, adding, “They were spending much more money on horses than people.”

Now that the experts have determined the actual size of medieval warhorses, they still have plenty of work left to do, such as looking deeper into a discovery that was made in Westminster, analyzing horse DNA, and studying the armor they wore.

A picture of one of the horse bones found in Goltho, Lincolnshire, can be seen here.