Saturn’s Moon Mimas May Have a Liquid Ocean

According to a new study, Saturn’s moon Mimas may have an ocean buried under several miles of ice.

Mimas was discovered in 1789 by English astronomer Sir William Herschel. The moon is covered with craters, some of which measure 25 miles in diameter (40 kilometers). The massive Herschel crater, however, measures a whopping 88 miles across (142 kilometers) and spreads out almost a third of the moon’s diameter.

Mimas is the closest major moon that orbits Saturn at a distance of just 115,280 miles (185,525 kilometres). It completes a full orbit around the planet in just 22 hours and 37 minutes. It is believed that the moon consists of most water ice with a small amount of rock. The surface temperature is about minus 209 degrees Celsius (minus 344 degrees Fahrenheit).

While there is no proof of there being an ocean on Mimas, some researchers do think that there is one hidden far beneath the icy surface based on simulations conducted by Colorado’s Southwest Research Institute. They performed the simulations based on measurements taken by NASA’s Cassini spacecraft in 2014.

The experts claimed that there is enough heat inside of the moon to sustain flowing water. The simulations showed how the inside of the moon could be heated and stretched from the gravity of Saturn. And they found that the heat was enough to support a liquid water ocean measuring as far down as 18 miles (29 kilometers) beneath the icy surface. Since it would be so far down, it wouldn’t be able to crack the surface of the moon.

In an interview with New Scientist, the lead author of the study Alyssa Rhoden explained this in further detail, “When we look at a body like Mimas, it is a little, cold, dead rock.” “If you put Mimas in a gallery with a bunch of other icy moons, you would never look at it and say ‘oh, that one has an ocean’.” But the Cassini data revealed something very interesting about the moon as it was observed wobbling while it spun, which suggested that there could be something odd occurring beneath the thick ice.

In their study, the researchers wrote in part, “An ocean within Mimas would be surprising, given the lack of comparable geologic activity to that observed on other ocean-bearing moons like Europa and Enceladus, and thus has important implications for the prevalence and identification of ocean worlds.” “We find that, using the most reasonable assumptions, Mimas would have the suggested ocean and ice shell thicknesses today.” 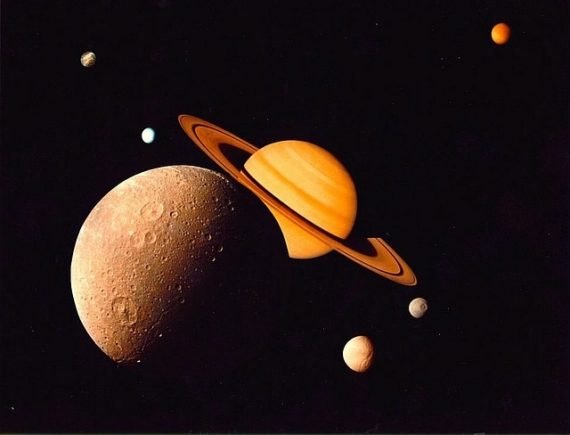 If this is correct, it would mean that Mimas is a “stealth world”, meaning that it is an icy moon with an unexpected ocean deep beneath the surface. “There are a lot of icy satellites in our solar system, and if Mimas could be an ocean world, any of them could be ocean worlds,” Rhoden stated.

Their study was published in the journal Icarus.