Like one those mysterious people who shows up uninvited at a party, proceeds to blow everyone away with their karaoke singing, and then disappears before anyone can get their name or learn where they came from, the interstellar object ‘Oumuamua blasted through our solar system in 2017, surprising astronomers with its origin, strange oblong shape, weird behavior and hasty exit. No one got a good look at it, prompting many to speculate it may have been a spacecraft that may or may not have been occupied. Fortunately, astronomers collected enough data on ‘Oumuamua that they believe a craft from Earth could track it and even catch up to it. Recently, one such group of scientists laid out a plan and a schedule to do just that.

“In this paper, we identify an alternative route to the interstellar object 1I/’Oumuamua, based on a launch in 2028, which does not require a SOM but has a similar performance as missions with a SOM. It instead employs a Jupiter Oberth Manoeuvre (JOM) with a total time of flight of around 26 years or so.” 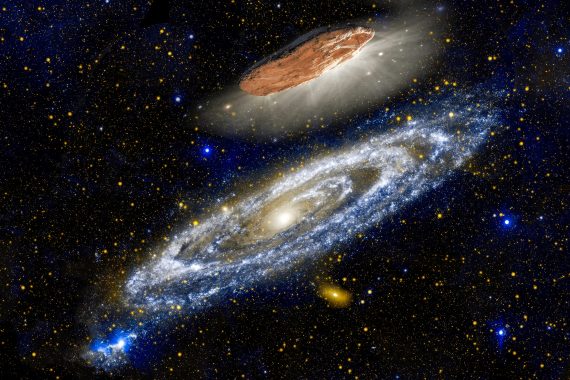 In a newly published paper, a team from the UK-based Initiative for Interstellar Studies (I4IS) – a diverse group of volunteers “committed to the vision of seeing interstellar flight achieved in the very near future” – proposed a technique that would allow a conventional spacecraft to take an unconventional path that would allow it to quickly catch up with ’Oumuamua. Most long-mission crafts launched from Earth gain speed by using the Solar Oberth Manoeuvre (SOM) – heading towards the Sun, falling into its gravitational well, using its engines to accelerate the fall, and then using the additional speed to slingshot far out into space. Many spacecrafts then perform a similar maneuver around other planets, including Earth, to gain more speed. In what they call Project Lyra, the I4IS team bypasses the SOM and sends a craft to Jupiter for that Oberth boost.

“In January / February 2019, our team has worked on potential missions after 2024, leaving enough time for spacecraft development.”

The I4IS team realizes public and private space programs have the heavy rockets today but not the interstellar probe needed to catch ’Oumuamua, but expect one to be developed by 2024. They then propose a series of gravity-assist maneuvers – around Earth, Venus, Earth again and then Jupiter over four years – before shooting towards ’Oumuamua with an arrival time of either 2050 or 2054 depending on options. That’s a speed far faster than the Voyager and New Horizons probes. (You can view the study with its excellent charts and illustrations here.)

Eliminating the trip around the Sun reduces weight on the interstellar probe by eliminating the need for a heat shield. Adam Hibberd, a researcher with the i4is and lead author of the new study, tells Universe Today the Jupiter Oberth Manoeuvre allows the probe to arrive at ‘Oumuamua at a slower speed than a SOM assist would, giving it more time to analyze ‘Oumuamua during approach and departure. The JOM would also reduce risks on the mission.

“Finally, our results rather strengthen the feasibility of a mission to 1I, as we demonstrated that such a mission may resemble existing interplanetary missions and not rely on significant new technology developments or unprecedented space Manoeuvres.”

In other words, a Project Lyra to catch ’Oumuamua can be done and would potentially solve the mystery of what it is. Now all they need to do is convince NASA, ESA, or another public or private space organization to take on the project.

As a certain shoe company likes to say: Just do it!

The “Alien Big Cats” Phenomenon: Why There is a “Strange” Aspect To It