There are places in this world that do seem to draw strange phenomena and hauntings to them. There can be many reasons for this, such as a violent or turbulent history, or in some theories the makeup of the very land the place rests upon, but whatever the reasons may be, such places certainly accrue their share of weird stuff. Here we will look at a location in the U.S. state of Idaho, which has for whatever reasons drawn to itself plenty of bizarre tales.

The city of Coeur d'Alene sits in Kootenai County, Idaho, United States, and is the county seat and the largest city in North Idaho. There is a long history here, the land first belonging to the Coeur d'Alene people, from where it gets its name, a federally recognized tribe of hunter gatherer Native Americans who lived along the rivers and lakes of the region in a sprawling territory spanning from eastern Washington to Montana. The city itself has its beginnings when in 1878 a General William Tecumseh Sherman founded what would be called Fort Sherman on the north shore of Lake Coeur d'Alene, and the town would blossom with the influx of gold and silver miners to the region, seeing further growth when the Northern Pacific Railroad reached the town in 1883. In the late 19th century, there would be a timber boom in the area that would further propel the burgeoning settlement’s growth, and in the wake of the Great Depression the city leaned into the tourism industry, with numerous ski resorts and recreation areas amidst its natural splendor, which helped it become the successful, thriving city it is today. It would come to be known as “City of Beautiful Homes” and the “Scenic City by an Unsalted Sea,” an idyllic mountain paradise. It and the Silver Valley in which it sits are also apparently incredibly haunted and filled with all sorts of paranormal strangeness.

The first signs of something amiss here came with the city’s founding, when there were apparently a good number of mysterious skeletons dug up, the origins of which remain unknown. There is also the sometimes-violent history of the town, with it being described in its early days as a lawless den of scum and villainy. There are many reports of shootouts and drunken brawls leading to death, so this definitely seems that it could have contributed to some of the stories permeating the area, and what stories they are. One such ghost can apparently be found wandering the North Idaho College main campus, where there is a good amount of paranormal activity, of which local historian and Director of Programs and Marketing of the Museum of North Idaho Robert Singletary has said:

There’s several of those things floating around down at the College and some of the janitors would swear at night they heard songs and footsteps, but there’s nobody in the in the building. I believe there is –how do I put it?—supernatural, unexplained events. I think we have friendly ghosts. 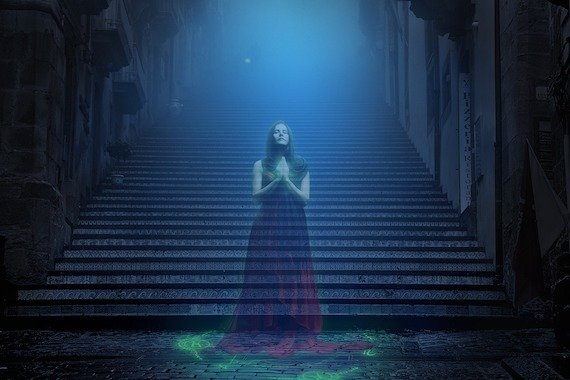 North Idaho College was once part of Fort Sherman, and this may explain some of the apparitions here. There is rumored to be the rather angry ghostly specter of a former German prisoner of war soldier from the era here, who will go around pushing around visitors and throwing rocks at them. Another haunted place here is the NYC Piano Bar, where both bar patrons and employees have witnessed some strange stuff. The owner of the bar has said of when the Spokane Paranormal Society investigated:

When the paranormal society came down here they showed us places where there was supposedly a portal and they even described certain entities that were in our venue. They said they found a lot of energy and there was a certain barstool that this one entity liked to occupy and so on. Another ‘entity’ also seemed to like music. Now, those are barflies. One entity, however, had a rough goodbye. There was supposedly an ‘ungood’ entity that they exorcised. We had a woman come down with sage and she smudged all around the whole place and supposedly got rid of the bad guy. Since we did the exorcism thingy, I feel like the place is not as occupied, but once in a while I still get that feeling.

Another haunted place here is the Bates Motel, on Sherman Avenue, where guests and employees alike are treated to regular displays of sudden cold feelings, flickering lights, and moving ashtrays, as well as shadow figures and apparitions. Once used as a barracks of war, rooms 1 and 3 are said to be particularly haunted. There is also a saloon in the nearby town of Kellog, in which saloon owner killed a man in 1906, and his victim still apparently seeks revenge. The spirit of a young girl named Abigail lingers by her grave in a nearby cemetery in the town of Cataldo, and, lastly, a legendary fish woman is said to prowl the depths of Lake Couer D'Alene, who lives near a big pointed rock in the vicinity. It certainly is a place infused with its share of paranormal phenomena, but it is not clear why that should be. Why has this place drawn to it so many stories of hauntings? Is it the history orbiting it or something else? Who knows? Whatever the case may be, it certainly seems to be a place with a good amount of paranormal activity, and might just be worth checking out the next time you are in town.

Thought Forms: They Only Exist Because We Do Too