The Mysterious Cursed and Haunted Tomb of a Vampire Baroness

Some spooky tales and legends always seem to gather around graveyards. There is some quality that invites such stories, a sense that something is not quite right and that the dead still walk among the tombs and gravestones. Cemeteries have long attracted tales of the paranormal, and some are wrapped around real historical people, grains of truth blossoming into eerie lore that is hard to know the truth of. Often real people will intertwine with such tales, and mixing with the already creepy ambiance of cemeteries these cases can get pretty strange, indeed. Here we get into the strange and macabre case of a rich Baroness who would in death weave about her bizarre stories of a haunted, cursed mausoleum and of being a vampire.

Born into a rich a Russian industrialist family in February of 1779 in St Petersburg, Russia, Baroness Elizaveta Alexandrovna Stroganova led a charmed existence. Her family was one of the wealthiest in Russia, rich off of money made from salt and fur, and also very well-respected, having been bestowed the title of Barons of the Russian Empire by Tsar Peter the Great. She would also lead a rather colorful life, marrying a young man from another family of rich industrialists by the name of Nikolay Nikitich Demidoff when she was just 16, and when he became a diplomat the two moved to Paris, France, where they would have four children, only two of which would survive into adulthood. The Baroness was known as an outgoing socialite who was very at home and popular within the aristocratic circles of Paris, which along with her good looks made her the talk of the town. Their lives became a bit tumultuous when mounting tensions between France and Russia forced Russia to recall Nicolas in 1805. The two moved to Italy for a time before heading to Moscow, but their marriage would disintegrate after that. Now free and unfettered, Baroness Demidoff moved back to Paris, where she had always felt most at home and in her element, and she would die there in 1818 at the age of just 39. It was in death that her life would get weird.

The Baroness was buried in the Père Lachaise Cemetery, which had just opened in 1804 and was considered a chic and fashionable place to have one’s corpse interred. If you were going to go out, you might as well go out in style, and the cemetery was the final resting place for the rich and powerful. The largest necropolis in Paris, here there were impeccably well-manicured tree-lined streets and lavish mausoleums and neo-classical and neo-gothic tombs, and one of these belonged to Baroness Demidoff. Hers was a massive and elaborate structure of white marble, standing at an imposing 32 feet high, structure surrounded by pillars and reminiscent of an ancient Greek temple, the final touch being the crystal coffin she was supposedly buried in. It seems every bit a mausoleum fit for a rich Baroness, but it was also spooky enough that it began to accrue some very strange stories. 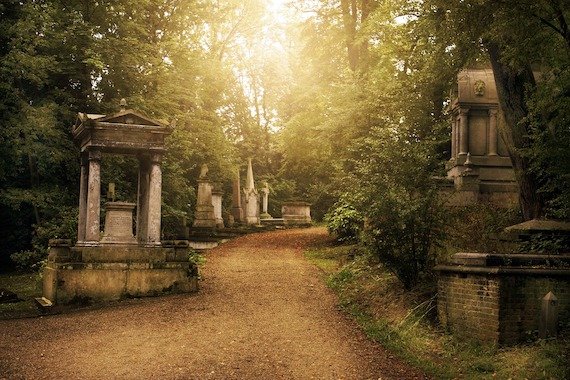 Rumors would later begin making the rounds that Baroness Demidoff’s will had left a rather bizarre stipulation. According to the rumors, her will stated that a fortune would be awarded to anyone who could spend a year in the mausoleum alone with the body of the Baroness, and there were certain strict rules to abide by. The person who would try it was not allowed to leave the tomb for any reason, other than for one hour a day to take a walk, during which time they were strictly forbidden from any human contact, and the walk was only to be undertaken before 5 o’clock in the morning in summer and 8 o’clock during the winter months. On top of this, the only diversion they were allowed was “that of reading by the funeral light at the head of the coffin.” A servant was to visit the challenger in order to bring food and water and to take away waste, but this servant was not to be spoken to or even acknowledged in any way. Indeed, this guest was not to talk to anyone for the duration of the entire year, or they would be disqualified or forced to start again. It seems odd to be sure, and adding to the ordeal of anyone hoping to pull it off was that the Baroness was said to be interred within a crystal coffin, her corpse clearly visible to whoever may sit within the gloom with her, and there were supposedly mirrors installed everywhere to make sure the observer was always confronted with the morbid sight. One Paris newspaper report would say of it:

The princess lies in a crystal coffin. Thus, the whole body is distinctly visible, in order that the man or woman who might undertake the long watch should never lose sight of it, and during the whole year and a day have his thoughts constantly occupied with the deceased princess. The walls and ceiling were lined with plate-glass mirrors, so that, whichever way the watcher might turn, he or she would always be confronted by the spectacle of the dead Princess in her glass coffin.

According to reports, no one had ever been able to spend more than a few days in the mausoleum, but as soon as this news started hitting the papers, there were plenty of people who were willing to take up the challenge. As the news spread, applications came in from would-be challengers from all over the world, and one 1894 report in the New Zealand Herald reads:

For months after the publication of this story the conservator of Pere Lachaise Cemetery received so many letters, from all parts of the world, from persons of society anxious to earn the million francs, that it became a long daily labour to reply to them. This time it was affirmed that several persons had attempted the terrible death-watch, but had all abandoned it. They had, it was said, heard unearthly and mysterious sounds, and been struck with horror and fear by ghostly apparitions. Though applications to watch by the coffin of the Russian Princess came from all parts of Europe, and even North and South America, Belgium seems to have furnished the largest number of intrepid individuals willing and anxious to sit for a whole year in silence beside the glass coffin.

People from all walks of life, both men and women, applied for the macabre challenge, and there were soon numerous reports that those who tried faced all manner of misfortune. There were reports that people had seen ghosts, fallen mysteriously ill, or gone insane after only days or even hours of being in the dead Baroness’s company. In many cases, the person who tried was found screaming to be let out, in others they came out of the ordeal with mysterious scratches and bruises on their bodies, and in some reports the person would die shortly after exiting the tomb. No one could last long, and the longest anyone was said to have lasted was three weeks, after which they had become a “jabbering idiot.” 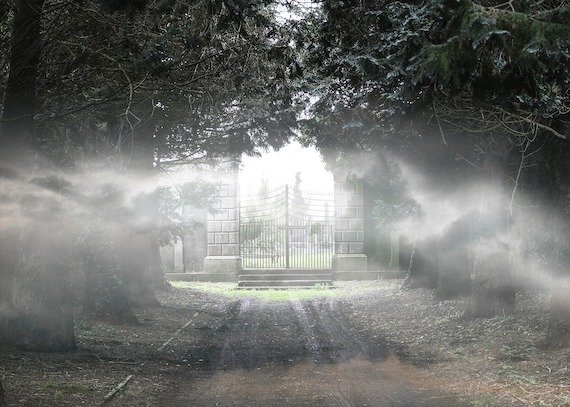 Adding to the growing spooky legend surrounding the mausoleum of Baroness Demidoff is that her mausoleum is covered in all manner of strange symbols and numbers, as well as carvings of bats and of wolves’ heads, and this led to rumors that not only did these have some sort of occult significance, but that the Baroness was actually an immortal energy vampire and that her will was designed to provide people for her to suck the life force from. Only adding to these rumors was that her corpse was said to barely deteriorate at all, and there were meanings found in everything from her date of death to the location and placement of the tomb that supposedly hinted at her immortality, to the point that she was sometimes known as the “Vampire Baroness of Paris.” These stories have made the rounds right up into modern times, with people reporting seeing apparitions near the mausoleum, or of feeling sick or suddenly drained of energy in its vicinity. There have been mysterious orbs and even a glowing face in the gloom, and such stories have earned it a reputation for being a haunted place. Unfortunately, it is unclear how true any of the stories that started all of this are.

We do know that Baroness Demidoff is a real person and the mausoleum does exist. It does have many strange symbols adorning it and there were certainly many people willing to come and try to stay in the tomb, but the problem is that it is unknown just how true the stories of the mysterious will and the crystal coffin are. One of the problems is that these stories didn’t begin to circulate until long after the Baroness had died, with the rumors first appearing in the news in the 1890s. Before that, there was no mention of glass coffins, the will, or the various strange phenomena surrounding the mausoleum. It was only when these news stories began spreading like wildfire that the legend seems to have begun, so this highly suggests that it was perhaps nothing more than a 19th century newspaper hoax that took on a life of its own and engraved itself into the lore of the tomb. The 19th century was actually pretty notorious for newspapers printing fanciful stories and fake news, so the story of bizarre wills, curses, and vampires certainly seems to fit the bill here, although no one can really seem to agree on where this story first appeared. It was likely a throwaway bogus article on a slow news day that for whatever reason soon got picked up and caused a sensation around the world, nothing more than a hoax that got out of hand. However, considering the more modern reports of strange phenomena around the mausoleum, it certainly seems that something weird is perhaps going on there. Today, the Père Lachaise Cemetery is the most visited cemetery in the world, as well as the city’s biggest park, full of breathtaking architecture, peaceful meandering trails, and historical significance, as well as the tombs of famous people throughout the ages. Among these, the tomb of Baroness Demidoff still stands and can be seen to this day, although no one is allowed inside to see if there is a crystal coffin and a vampire in there. Maybe the best way to know for sure is to go check it out for yourself.