The Strange Mystery of the Beast of the Black Causse

Meandering through the Massif Central of France is a series of limestone plateaus called the Causses, bordered to the north-west by the Limousin and the Périgord uplands, and to the east by the Aubrac and the Cévennes. This is a realm of mountains, rolling hills and deep gorges, populated by sheep and cattle farmers living simple, quiet lives. One of the Causses is called the Causse Noir, in the Département of Aveyron, and like the rest of the area it is full of quaint villages and rural farms. It is a peaceful place surrounded by beautiful, scenic countryside, the last place one would associate with any sort of scary stories or supernatural terror, yet back in the 18th century this placid, picturesque region was supposedly visited by a vicious, murderous beast that convinced the populace that it was not of this world.

In the summer of 1799, the quiet, idyllic life of the people of the quiet village of Paliès, in the la Lozère area of the Causse Noir, was intruded upon by a malevolent and vicious visitor. According to the story, it began one day when some children were out playing when they saw at a distance a large, dark-colored animal similar to a wolf, but with longer legs and a slim build, looking somewhat like a cross between a wolf and a large greyhound and it was immense, purportedly standing at around nearly 6 feet high at the shoulder. This creature was like nothing they had ever seen, and was large and threatening enough that the children ran to a tree close to a house on the northern side of the village, but unfortunately the beast had seen them and gave pursuit, moving impossibly fast and catching up to them easily. The creature then allegedly grabbed one of the children, a 6-year-old boy named Pierre-Jean Mauri, in its maw and lifted the boy into the air and carried him off into a nearby wooded area. The remaining children screamed loudly enough to catch the attention of men shearing sheep nearby, one of which was the father of the boy who had been taken, and they came running to the scene, boldly running into the trees to search for the monster and finding the boy lying on the ground, still alive and apparently abandoned by the predator, but with grievous injuries from which he died not long after. 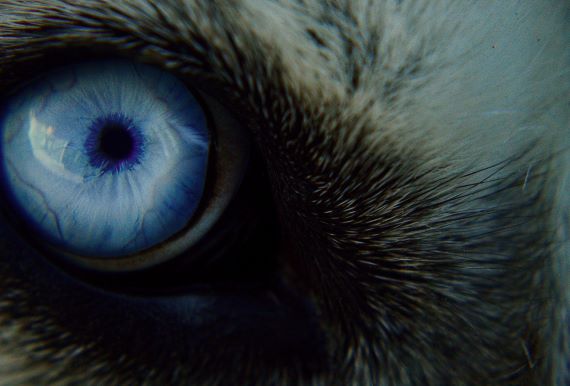 After this, the beast seems to have gotten bolder, coming closer to the village and beginning to be seen by many villagers in broad daylight rather than hiding in the darkness of night, and also increasing its range to other nearby villages. The beast was very much as the children who had first seen it had described it. It was said to be massive, nearly the size of a horse, with the build being a mix between a greyhound and hyena, but with the fierce visage of a wolf. Some reports mention glowing eyes, and it was said to make a sound like the “braying of a donkey.” It was said to boldly raid villages to snatch children and carry them off to their doom, often in broad daylight and full view of witnesses or while accompanied by their parents. In one such case, a child was with his older brother keeping watch over their cattle when the beast appeared, began walking on its hind legs, and then snatched the younger boy as his brother looked on in terror. When a crowd of adults ran to his aid and searched the area, they would find the limbs buried in the ground. On another occasion, a young girl in the village of Bourjoie was taken from right next to her father, her body later found without limbs or liver.

The beast would allegedly attack between six and a dozen children over a 6-month period, depending on the tale, and in every case it only ever seemed to eat the livers and limbs of its victims. Sometimes these limbs were allegedly found, either strewn about the wilderness or sometimes buried at a place in the Malbouche Ravine called by locals “the haunt of the ogre.” It also would sometimes leisurely walk right through villages in the daytime without attacking and seemingly just to frighten the villagers. Rather curiously, it never seemed to attack adults or animals, often seen to walk right through flocks of sheep and herds of cattle without paying attention to them and leaving them unharmed. It only ever attacked children, and this inspired so much fear in the villages of the area that parents kept their children locked indoors and took to keeping vigil armed with whatever weapons they could find.

As the fear spread through the region, the area became known as the “Black Causse,” and creature also began to accrue stories that seemed to suggest that it was of supernatural origin. Some witnesses would describe the creature as disappearing into thin air, or of being in one place, only to appear miles away just moments later. Some attacks happened in different villages in such quick succession that it was impossible that the creature could have possibly covered such distances so fast, suggesting that it was either somehow teleporting or there was more than one of them. It was also said to often stand upright and walk like a man, sometimes switching between walking on all-fours and walking on its hind legs. Groups of men who went out to hunt it down would come back with tales of how it seemed to be impervious to bullets, simply shrugging off all efforts to shoot it. This suggested something beyond the natural world, and the scared and superstitious locals were calling it a Loup garou, the French term for “werewolf.” Then, after six months, the attacks at the Black Causse stopped as suddenly as they had begun, although a similar creature would soon pop up elsewhere, suggesting it had merely moved on to other hunting grounds. The then parish priest, Père Casimir Fages, who was one of the only literate people in the region to record the events, would say of this:

After some six months or a year, the creature disappeared without anybody knowing what had happened to it. About the same time, a similar beast was seen in the Sanvero woods near the village of Cornus in the Aveyron province; it almost managed eat a little girl that I was to know twenty-five years later; she was near her home in the village of Labadie, in the parish of St Rome Berlières ; her brother, older than her, rushed to her defence and grabbed her from the creature, he dragged her into the house ; through the cracks  in the closed door they could see the Beast watching and waiting for some time for the prey which had escaped, only by the skin of her teeth. Indeed, a bite from the creature had taken a considerable piece of skin from her side; this scar was never to fade throughout the rest of her life. Whatever this animal was, its appearance had an enormous impact throughout the whole area of the Black Causse. Uneducated people saw in the Beast something supernatural, especially after all the upheavals and ordeals of the recent Revolution.

And that seems to be the end of the story, the tale slipping back into the mists of time to be largely forgotten. We are left with few answers and no real evidence, doomed to cast this account into the pile of the unknowable dark corners of history. What are we dealing with here? Was this some anomalous, super-sized wolf or feral dog? Was it a misidentification of something else? Why did it only attack children, ignoring livestock and eating only the livers and limbs of its victims? What are we to make of the alleged supernatural powers it supposedly possessed? Could this just be a local legend that went on to take on a life of its own? It seems that the only people who may hold the answers to these questions are long dead, and this will most likely remain an obscure historical oddity forever past our grasp.

Bigfoot, Yeti and Government Records: What Do Agencies Really Know of These Hairy Giants?