One idea about the nature of our universe that has been gathering more serious consideration and prominence in recent times is that of what is often called the multiverse, that there are more than one reality and universe. The basic premise is that there is more than one universe, by some estimations limitless ones, all existing side by side in an infinite, countless array of different realities. One idea is that many of these realities nearly mirror our own, but with just small differences and variations between them, perhaps with infinite versions of past events and limitless versions of you. It was all once a very science fiction-type idea, but the theory that this may be so has come to be taken more seriously in the modern age, with some great thinkers out there contemplating the idea that this could be so. What if there were other variations of you out there, or other varying timelines of the historic events we know? Unfortunately there is no way for sure to know if any of this is true, and it all remains in the limbo of pure speculation and thought experiments, but one odd person has claimed to have stepped into an alternate reality in which The Beatles never broke up, and not only that, he managed to snag a copy of their latest album.

The world famous rock band known as The Beatles perhaps needs no introduction. Formed in Liverpool, England, in 1960 and made up of the musicians John Lennon, Paul McCartney, George Harrison and Ringo Starr, they would start from humble beginnings but their innovative sound and style launched them into the stratosphere, and by 1964 they were an international sensation. Their popularity would quickly bloom, and they would go on to become perhaps one of the most influential bands of all time, as well as the best-selling music act of all time, hold the record for most number-one albums on the UK Albums Chart, the most number-one hits on the Billboard Hot 100, and at one point they seemed nigh unstoppable. In addition to their music, they were known for revolutionizing many aspects of the music industry, including recording, with them helping to make the record album the dominant form of music consumption, artistic presentation, and songwriting, and they were a driving force of 1960s counterculture. Although they broke up in 1970, their legacy has continued to reverberate through the music industry and pop culture to this day, their large catalog of songs beloved all over the world and with them still regularly topping lists of the greatest artists in history. Many people wanted The Beatles back, and it seems that at least in some alternate reality they got their wish.

The bizarre story begins with a man from Livermore, California, who calls himself James Richards. On September 9, 2009, at around 2PM, Richards claims that he had been driving home with his dog after visiting a friend, and that on the way he had decided to take a detour through a scenic drive in an area called Del Puerto Canyon, just west of the town of Turlock. It was for the most part a pretty uneventful drive at first, and as they meandered through the rugged landscape, Richards’ dog apparently started to whine to be let out of the car, as if she needed to relieve herself. He stopped the car to let her out to do her business, and at some point she apparently started chasing a rabbit out into the wilds. Richards claims to have given chase, and at some point he tripped on a rabbit hole and fell down, hitting his head and being knocked unconscious in the process. This is where things would take a turn for the decidedly bizarre.

Richards claims that he then blacked out, and when he woke up he was in a room with furniture and “some electronics” within it, and that there had been placed upon his head bandages put there by some unknown person. He was particularly startled by the sound of traffic outside, which in no way matched up to the secluded, quiet rural area in which he had been when he had fallen, where he had not passed any other cars at all. In one corner of the room sat an unusual and sophisticated looking electronic machine the likes of which he had never seen and the purpose of which he could not fathom. As he struggled to take in all of this new information and to try and process where he was, the door then opened and Richards’ dog purportedly rushed in to give him a warm, excited welcome, as if he had been gone for a while. As Richards hugged and played with his beloved dog, still wondering just where in the world he was, he noticed a man standing in the doorway watching him.

The stranger was described by Richards as being “about 6 ft tall, had medium long black hair and was dressed casually nice but gave me a “greasy” vibe, if you know what I mean.” The strange man introduced himself as Jonas, and claimed to have found the unconscious Richards lying in a field with his dog barking nearby. The weird thing was, according to Jonas, that field was only about 20 feet from the room they were now in, which was preposterous considering Richards had been in a totally uninhabited and remote area at the time. When Richards objected to this idea and insisted that he had fallen and been knocked out in an area with no houses around, the mysterious Jonas gestured to the machine in the corner of the room and came up with a truly weird story indeed. He admitted that he was in fact an inter-dimensional traveler using his strange machine to jump about to parallel universes, and that he had by chance come across Richards lying unconscious upon the ground, alone and with nobody to help. Jonas claimed to have taken it upon himself to pull Richards into a portal back to his own dimension, something which he said he never normally did but had made an exception in this case. As the conversation dragged on, things would become weirder.

Jonas claimed that in his world, such inter-dimensional travel machines, or “Parallel Travel Machines,” as he liked to call them, were readily available, but that they were considered to be incredibly dangerous to use, with many who tried never coming back to tell the tale. He also explained that there was an infinite number of Earths, and that hopping about between them was a harrowing task at best, holding the risks of a portal opening from a large height, underwater, into fire, or countless other unpredictable factors, their operation being more an art than a science. This had apparently ended up with the government coming up with a list of parallel worlds that were considered safe for travel, many of which were sparsely inhabited or untouched by mankind. Jonas himself claimed to be involved with staking out new, uncharted dimensions into which common people could travel without danger, when he had come across the world in which he had found Richards lying upon the ground unconscious. 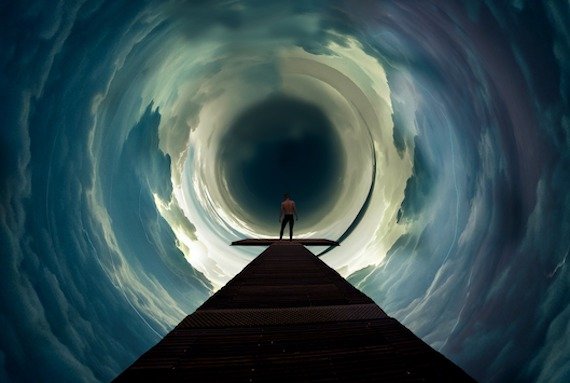 The fascinated Richards began a conversation with Jonas about all of the intricacies of the world he had come from and the one he had found himself in, the two of them trying to come to an understanding of the similarities and differences between the two realities and covering a wide range of topics including food, pop culture, and technology. It was then that the topic turned to music, and when the great band The Beatles got brought up, Jonas said that his brother had just gotten back from their concert recently. When an incredulous Richards claimed that they had long ago broken up and that John and George had died, Jonas insisted that in his world they were still alive and well and making music. As evidence, Jonas apparently guided Richards into a room with strangely designed speakers and a wealth of Beatles photos, merchandise, and output that had never existed in the “real world” that he was familiar with. While many of the songs were exactly the same, there were also some that had some differences, and still others that had never been released or made in the world from which Richards had come from, songs that he was hearing for the first time.

It all seemed to be bizarre but in good fun until Richards suggested that he take a recording from one of these never made Beatles songs back with him to his own dimension, to which Jonas took on a rather somber and sinister demeanor. He allegedly made it very clear that none of it was to go back, explaining: “No, you are not to take anything with you back to your world. No pictures, no souvenirs, no tapes, NOTHING.” It wasn’t explicitly explained why it was so shunned to take any of this stuff, but Jonas was so serious and insistent about it that Richards breathlessly agreed. However, he couldn’t help himself. When Jonas was distracted by someone coming to visit, he allegedly covertly stuffed one of the tapes into his pocket. When Jonas returned, they apparently had something to eat, with more differences between the realities making themselves known, such as purple ketchup and various foods with different names, and then Richards expressed his desire to be getting home. They went back into the room with the machine and went through some sort of portal, and going through it purportedly had the sensation of “getting wet and staying dry at the same time,” which seemingly freaked out the dog a great deal. When Richards returned, he found that there was a burn mark on the ground where the portal had appeared, and that the tape he had stolen would not play even when he bought a new tape player to play it in. All he could ascertain was that the title of the album was “Everyday Chemistry.” He would go on to try and reproduce some of the songs that he had heard from memory, and although it all sounds reminiscent of the Beatles, it is not exactly evidence of anything other than someone copying The Beatles’ signature sound.

Considering the completely bonkers nature of the story and the fact that the tape can't be played back, it seems likely that this is a hoax or a delusion conjured up by this person’s mind, but what if he is telling the truth? If The Beatles had continued making music, as they had done in this alleged alternate reality, what sorts of masterpieces would they have come up with? In the end it all seems to be just a wild tale, but nevertheless, whether any of this was real or not, or whether there really are parallel universes in which The Beatles rock on or not, it sure makes one wonder what was on that tape.

Five of the Most Dangerous, and Monstrous, Humanoids Out There: Beware!