There are few trips more universal or more solemn that the funeral procession from a church, home or funeral parlor to a burial ground. In the U.S., traffic is still stopped for them, and they’ve sadly happened so often since the pandemic that it’s a wonder there aren’t grooves worn in the pavement leading up to the largest cemeteries. A recent discovery in Saudi Arabia shows that this actually happened 4,500 years ago – paths as long as 105 miles were found worn into the ground leading up to and around stone tombs … paths made not by tires or wheels but by the feet of the mourning. These “funerary avenues” tell archeologists not just about how this ancient culture remembered their dead but how they moved from a mobile pastoral life to oasis-centered settlements. 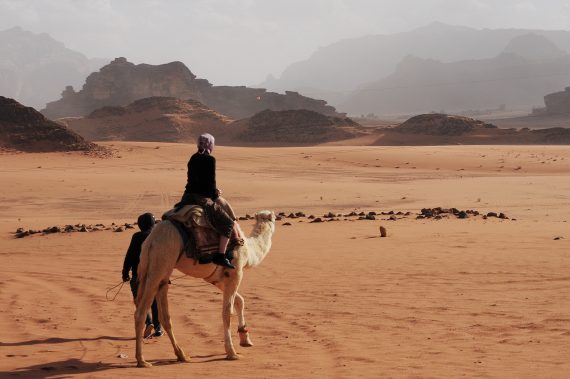 “The desert regions of the Arabian Peninsula and Levant are criss-crossed by innumerable pathways. Across large areas of north-west Arabia, many of these pathways are flanked by stone monuments, the vast majority of which are ancient tombs. Recent radiometric dating indicates that the most abundant of these monuments, elaborate and morphologically diverse ‘pendant’ structures, were constructed during the mid-to-late third millennium BCE.”

In a study published in the journal The Holocene, lead author Matthew Dalton, a research associate at the University of Western Australia, describes these pathways across the Arabian deserts – many of which are more visible by air like the Nazca Lines of Peru. The eye-catching feature is the 4,500-year-old pendant-shaped tombs – from above, they look like a tall, thin pyramid with a ball on the point (see the photos here). Human remains have been found in some of the tombs, some have been raided and others have been worn away by erosion or modern human intrusions.

“It’s not difficult to imagine that the tombs were used to remember or commemorate the dead, especially as the descendants or relations of those buried within them would have probably walked past them frequently during the course of their everyday lives.”

Dalton tells Live Science what seems obvious – that these paths were meant for visiting the tombs – has little supporting evidence. For one thing, the avenues are up to 105 miles long and the network covers at least 330 miles (530 km) from north to south. He believes they instead show human movement between major perennial water sources in the later Middle Holocene era (the Northgrippian period between 8,200 years and 4,200 years ago), social and economic connectivity and subsistence strategies as they changed from nomadic herders to farmers and traders – especially as the climate changed due to long-term droughts.

More study is needed and more satellite imagery, aerial photography, ground surveys and grave excavations are planned. It now appears that the so-called “funerary avenues” actually served many purposes for those living in the Arabian desert 4,500 years ago. However, the one constant on all of them are the tombs, so perhaps the name “funerary avenues” is truly the most appropriate and descriptive.